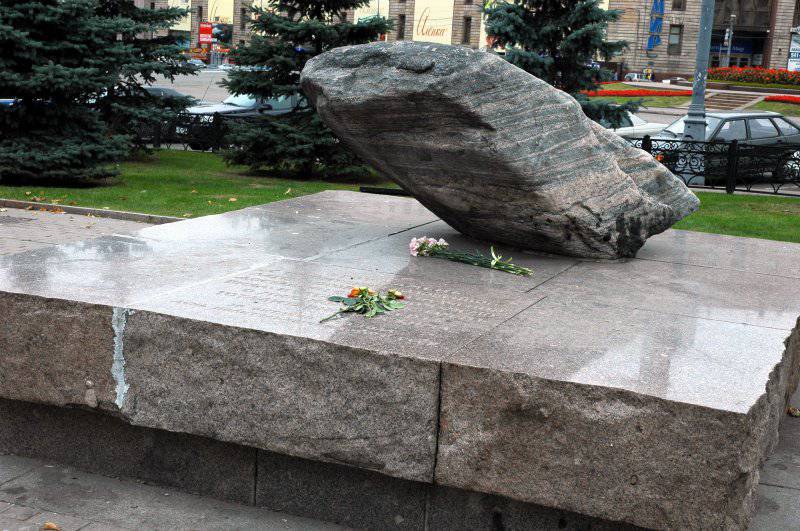 In Russia, October 30 celebrated the Day of Remembrance of the Victims of Political Repressions - a memorable date included in the official calendar of the year 1991. In many cities and towns on this day, mourning events will be held to commemorate those killed and injured during political repression. In Moscow, for example, already yesterday, several dozen people gathered near the Solovki stone in Lubyanka to honor the memory of the repressed. The Return of Names campaign has been regularly held there since the 2007 year: those who came in turn read out the names from the firing lists provided by the Memorial Society. The millionth numbers of the victims are called ...

But is it only the memory of these “millions” that drives the organizers of the “Return of Names” and other similar actions? It turns out that no. “If we want to overcome all the totalitarian things that exist in us and let all the free things that exist in each of us blossom, then we will see each other at the Solovetsky Stone,” such a call is posted on the official website of the Return of Names. It turns out that it is necessary to come to the Solovetsky stone not just to pay tribute to the victims of repression, but to “overcome everything totalitarian”. Reject, naturally, from our "shameful" stories, brand the "totalitarian" past. And repent, repent, repent forever ...

How can our liberals still be able to privatize anything and everything! So, the people’s grief for the innocent dead and tortured is trying to turn them into a blessing - for the “de-Stalinization” of society, the rejection of its own history. And how at the same time our liberals lie!

Take, at least, their “evidence” that millions of victims go by the victims of the “Stalinist terror”. There are, of course, no millions in the shooting lists provided by the same Memorial. “Well, so what? - Liberals parry. “After all, the exact statistics of repressions were never carried out: it was unprofitable for the authorities to fix the true scale of repressions.” But many sources, the liberals say, quite adequately paint the scale of the tragedy ...

What are these “sources” that estimate the total number of victims of the “Stalinist terror” referred to by the “de-Stalinizers”? By and large, there are only three of them. This, of course, is the Solzhenitsyn GULAG Archipelago. This, of course, the report of N.S. Khrushchev "On the cult of personality and its consequences." And the "study" of the Englishman Robert Conquest. These “sources” are the most “authoritative” for the current “de-Stalinizers”. They are not embarrassed by the fact that Solzhenitsyn's GULAG Archipelago is still a work of art, or by the fact that Khrushchev, speaking with his report before the party congress, did not publish a report on the scale of repression, prepared at his request by the then Soviet security forces. Well, the fact that the aforementioned Conquest, as it turned out, collaborated with British intelligence, is completely indecent to say that while writing his work.

And from the symbiosis of these "sources" a truly ominous picture is drawn. Solzhenitsyn writes about 110 millions of victims of repression. But even this seemed a little “perestroika” publicist Yuri Karakin: he brings the number of repressed to 120 millions! Some of the “de-Stalinizers”, however, consider these figures to be an exaggeration and tell 60-70 millions of victims. These assessments, however, also do not fit in any way with a more or less objective analysis of the demographic indicators of the USSR: there simply could not have been so many victims of the “Stalinist terror”. But what is the demographic data for our liberals, if the main thing for them is to condemn Stalin and lead us on the path of "de-Stalinization"? Here, as they say, every bit in line.

What is the true scale of repression, to accurately assess now is really very difficult. For example, the same Khrushchev, preparing his sensational report, requested data on repression from the then Minister of Internal Affairs Sergei Kruglov, USSR Prosecutor General Roman Rudenko and Justice Minister Konstantin Gorshenin. In February 1954 of the year they sent an official letter to Khrushchev, where, in particular, it was reported:

"According to the data available in the USSR Ministry of Internal Affairs, for the period from 1921 to the present, the OGPU Collegium, the NKVD troika, the Special Meeting, the Military Collegium, the courts and the military tribunals of 3 777 380 people were convicted of, including: VMN penalties - Note KM.RU) - 642 980 people, to content in camps and prisons for a period of 25 years and below - 2 369 220 people, to link and expulsion - 765 180 people.

Out of the total number of those arrested, tentatively convicted: 2 900 000 people - by the OGPU College, NKVD troika and Special Meeting; 877 000 people - courts, military tribunals, the Special Collegium and the Military Collegium.

The scale of repression is really huge, but there are no 120 millions, like Karjakin, or 100 millions, like Solzhenitsyn, and even 60-70 millions are out of the question. Is it because Khrushchev did not then make public these statistics? After all, starting to expose the "personality cult", it is more expedient to hang on Stalin a kind of "multimillion" atrocity - let it be not an exact list of victims, but only a kind of "estimate." And at the same time, to extort from the Soviet archives Khrushchev's personal involvement in the repressions.

Further: if we analyze the total number of victims of repression, it would be nice to clarify some important points. To begin with, the real criminals and opponents of the then authorities were surely included in the list of the repressed. What, from 1921 to February 1954 in the USSR there was no crime? Or there were no oppositionists who fought with the Soviet authorities? It means that among those almost 650 000 who were shot, and more than three million people who were behind bars or in exile, there were both real criminals and irreconcilable oppositionists.

Further: if the letter of Khrushchev’s ministers and the prosecutor counts the victims of repression from 1921, this means that for a substantial part of the crimes, it’s not Stalin who’s responsible, but the “Leninist Guard”, which immediately after the Great October Socialist Revolution unleashed terror against the White Guards , clergymen, “kulaks-peace-eaters”, etc., and so on. The Solovki stone, from which “de-Stalinisers” are being assembled today, is so named because it was brought from Solovki. And the camp there appeared long before the Stalinist "big terror" 1937-38.

Moreover, he appeared there even earlier - during the intervention and the Civil War. According to the Karelian blogger stepanov-karel.livejournal.com, as early as 3 in February 1919, the “northern” Miller-Tchaikovsky government, which was supported by “Western democracies,” adopted a resolution according to which citizens, “whose presence is harmful ... can be subject to extrajudicially arrested and expelled to the places specified in paragraph 4 of this Order. ” The said point read: “The Solovetsky monastery or one of the islands of the Solovki group ...” is appointed as a place of expulsion. As a researcher of the history of the Civil War, P.A. Golub, “the leaders of the white regime in the North — Tchaikovsky, Miller, Murushevsky and others — already in the emigrant distant, did not get tired of blackening the Bolsheviks for referring to the counterrevolutionaries to Solovki. But at the same time, they unanimously demonstrated the failure of memory, namely: they laid the road to Solovki ”.

But our liberals, who gather around the Solovetsky stone every year, are not remembered about all this. After all, they have another main goal - the “de-Stalinization” of Russia, understood as the first step towards its destruction. Of course, one can only welcome the initiative of “Memorial” to restore the names of all the repressed, but only without the accompanying calls “to overcome in oneself the totalitarian”. That is, to a total rejection of our history, in which there were not only repressions, but also the greatest achievements.