In 2012, the ships of the Northern Fleet passed more than 200 thousands of nautical miles 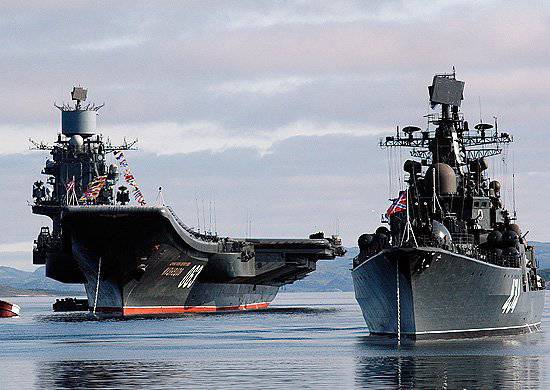 In 2012, more than 20 ships and vessels of the North fleet (SF) took part in long hikes, leaving behind aft more than 200 thousand nautical miles. As part of the combat training, surface crews performed several hundred combat exercises, including rocket and artillery firing, mine operations, and worked out combat coordination and interaction with the formations of ships of other fleets as part of inter-naval groups.

For the first time this year, the naval groups of the diverse forces of the Northern Fleet operated in the northern latitudes of the Arctic Ocean and for the first time in stories The navy of Russia carried out a landing of an amphibious assault on the unequipped coast of the islands of the Novosibirsk archipelago.

As the Northern Fleet Commander, Vice Admiral Vladimir Korolyov, emphasized, “in the Arctic areas, the North Sea sailors solved not only military, but also peaceful tasks - these are training in assisting ships in distress, ensuring the safety of civilian shipping, and surveying poorly known navigation areas.”

Ships and vessels of the Operational Marine Demining Unit (OMOR) of the Northern Fleet carried out work on the search, detection and destruction of explosive objects in the waters of the Ob Bay of the Kara Sea. In total, for six weeks the ships and vessels of the OMOR Federation destroyed 12 explosive objects, the surveyed area of ​​the water area was more than 160 square miles.

Crews of the Northern Fleet ships successfully completed the tasks of ensuring the safety of civilian shipping in the Gulf of Aden.

This year, the large anti-submarine ship Vice Admiral Kulakov set a record for the duration of sailing in this region of the World Ocean. His crew spent 159 days at sea, leaving thousands more than 29 astern, under his guard dozens of civilian ships of foreign countries avoided meetings with pirates and successfully delivered hundreds of thousands of tons of cargo to destinations.

In 2012, the Northern Fleet actively developed cooperation with the naval forces of other states. An agreement was reached annually to conduct the Pomor and Northern Eagle international naval exercises, the main purpose of which is to develop joint elements of anti-terrorism activities, ensure the safety of civilian shipping, and provide assistance at sea.

The work of seafarers from the North Sea was adequately appreciated - 26 seamen from the North Sea for successfully solving the tasks of long-distance marches, achievements in strengthening the country's defense capability, exemplary maritime training, maintaining high combat readiness and courage were awarded state awards.