Does the accident of a Russian bomber in Yeysk repeat the scenario of the Irkutsk disaster in 1997? 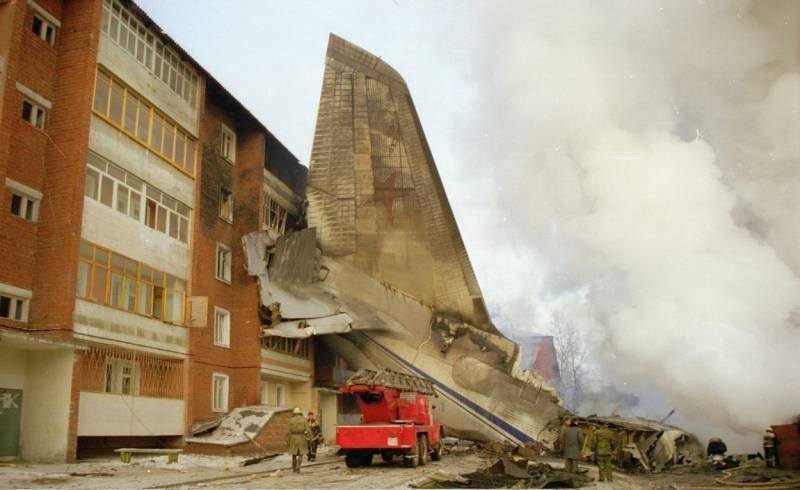 On December 6, 1997, an An-124 super-heavy transport aircraft crashed in Irkutsk during takeoff. The victims of the crash were 72 people. In this article, we will analyze what that plane crash and the Su-34 accident in Yeysk, which occurred on October 17, have in common.


And before proceeding to the main part, let's briefly analyze two frequently asked questions regarding the Su-34.

Was the length of the strip in Yeysk sufficient?

With a normal takeoff weight of the Su-34, 1300 meters is enough for a takeoff run. The length of the runway at the airfield from which the ill-fated aircraft took off is 3000 meters - more than enough for safe operation, so we can immediately exclude the option when the aircraft was operated in conditions that were not quite suitable for it or at the limit of calculated values.

Could the pilots have taken the plane to the side? 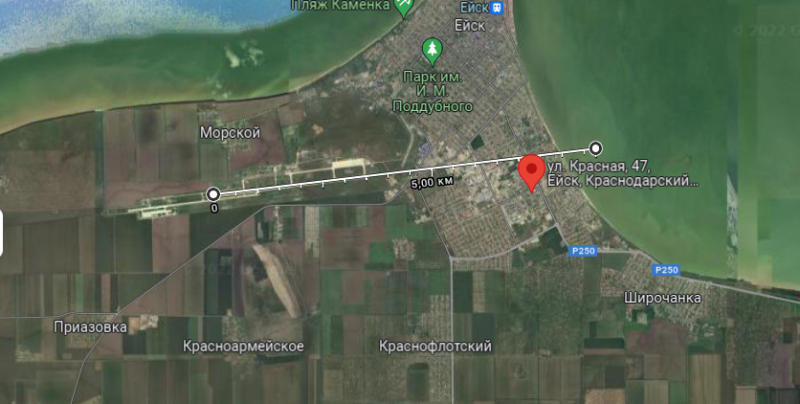 The building that the plane crashed into is marked in red in the screenshot (Krasnaya St., 47). It is located at a distance of 3700 meters from the end of the runway from which the Su-34 took off. Obviously, there was simply nowhere to “take away” the plane: the same distance to the left, to the right, and forward - residential development.

The fact that the point of impact is to the right of the runway axis may indirectly serve as a basis for the assumption that the left engine gave more thrust than the right one, which is quite consistent with the versions of failure and / or fire in the right engine.

What does the tragedy in Irkutsk have in common?

It is obvious that if the Su-34 had taken off in the other direction, then it would not have crashed into any house. In Irkutsk, the situation was similar - in the screenshot below, the airfield and the crash site marked with a red marker. 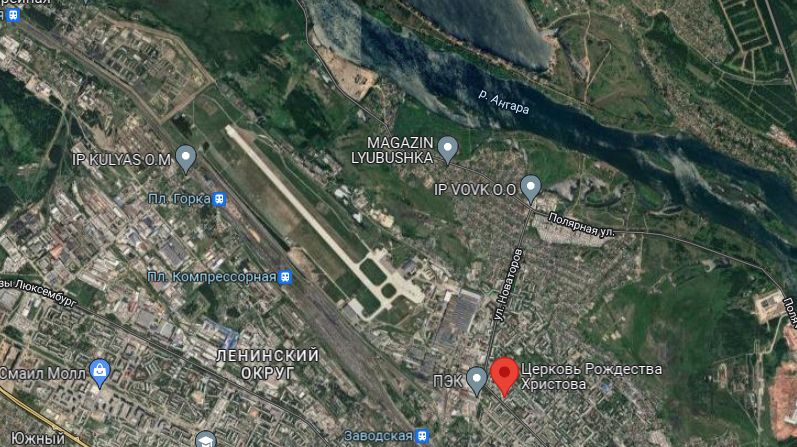 There are two solutions here - one is less global and cheaper, the second is more complex and will require significant time and finances. Let's start with the simpler.

One of the scenarios in which an engine failure occurs implies that this failure occurs before the PIC (aircraft commander) has made the decision to take off, that is, at the moment when the aircraft is still on the ground. The key to this scenario is that if the PIC is confident that there is enough distance left to stop the aircraft, he simply aborts the takeoff and the aircraft stays on the ground. This is the best thing that can happen. Only a doubt that the plane will be able to SAFELY (!) Stop within the runway can force it to continue taking off.

In order to increase the likelihood of such an outcome, a special EMAS system has been developed. In essence, these are equipped end safety strips in which cells made of deformable material are installed. Rolling out of the runway, the plane, as it were, "gets stuck" in these "honeycombs", without receiving any serious damage, thanks to which it is possible to avoid the most terrible scenario - damage to fuel tanks and fire. 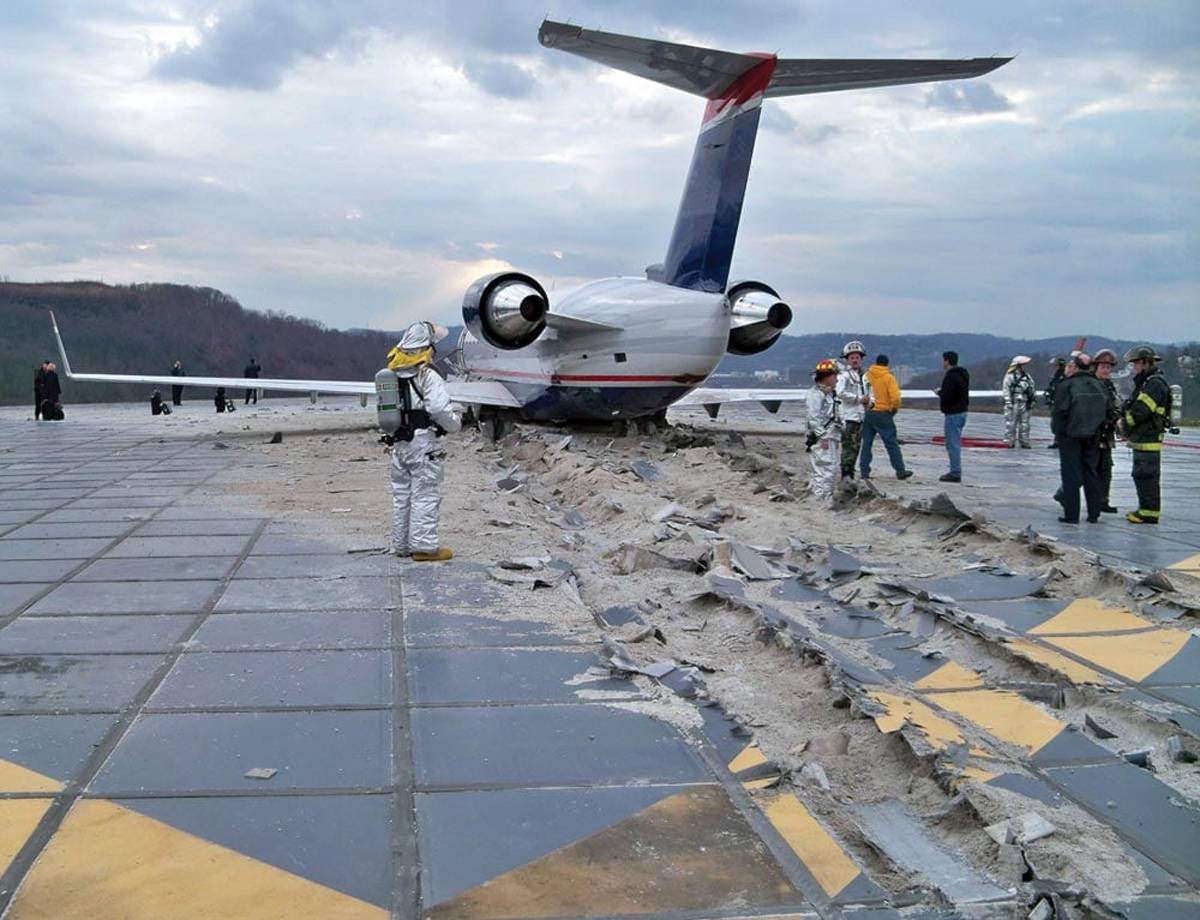 The video clearly demonstrates the effectiveness of such a system:


This solution requires a minimum of free space and is quite cheap both in installation and in subsequent operation. Despite this, Russia is in no hurry to implement such modern solutions in practice.

The previous solution is cheap, but it does not cover all possible scenarios. But what if the failure occurred when the car is already in the air? For example, in Irkutsk, problems with the engine began 3 seconds after the An-124 took off from the ground. In the case of the Su-34, it is not known at what stage the problems arose. However, if they happen in the air, in this case there is only one option, like the An-124 - to continue the flight, hoping that the remaining engines will not fail and their thrust will be enough for a turn and an emergency landing.

And here one point is fundamentally important - anything can be called a formal reason for refusal. A bird that got into the engine, poor-quality fuel, poor-quality engine repairs, icing, etc. And formally, these reasons may be correct. That's just victims on the ground can be avoided if you stop launching planes in the direction of urban development.

Why did the plane take off towards the city?

The thing is that takeoff AGAINST the wind is more preferable - in this case, the speed of the oncoming air flow is added to the speed of the aircraft relative to the ground, and the lift force increases. However, in the case of the Su-34, this rule applies to a much lesser extent, since its thrust-to-weight ratio (power-to-weight ratio) is much higher than that of a passenger or cargo aircraft, which means a gain of 20 km / h, which can be obtained by taking off against wind, for him is not important.

The situation with the An-124 was less optimistic from the very beginning. The length of the runway is 2500 meters, which is close to the minimum requirements for such an aircraft, which means that the influence of the wind was more significant.

There is only one solution in this case - a legislative ban on building closer than 4 km from the end of the strip. 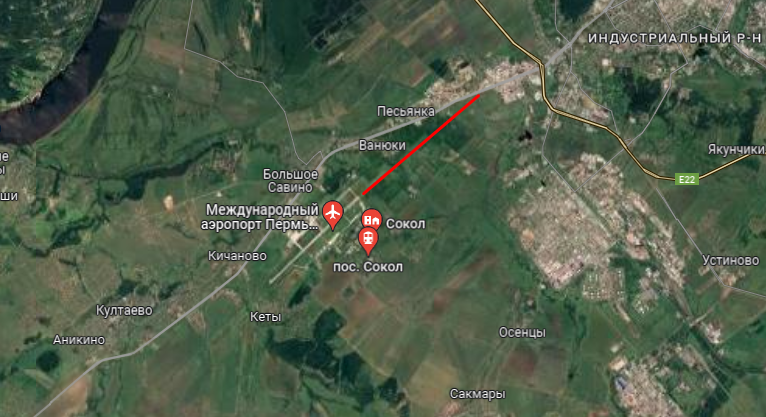 In the presented screenshot, just such a distance is marked in red. These building restrictions were introduced by the command of VCh 88503 with the assistance of the Ministry of Defense, and as practice shows, they are not a whim of officials, but serve as an example of reasonable rules designed to prevent the death of a large number of people.

Therefore, it is necessary to introduce clear regulations at the legislative level so that this issue is prescribed at the federal level, and not given to local authorities. Indeed, in the mentioned HF there were literate people who were not too lazy to deal with this issue, but there are no guarantees that they will be the same everywhere.

Of the operating airports where such a problem is relevant, I remember Sochi (Adler). Of the 1500 meters from the end of the strip to the sea, about 700 are built up - to put it mildly, not the safest place to live.

Despite all of the above, it is not known whether someone will solve this problem comprehensively, because in the media sphere it is quite possible to confine oneself to a narrower understanding of the problem - bad fuel or a flock of birds.