In Germany, the Klitschko brothers were awarded the Civil Courage Award and interviewed 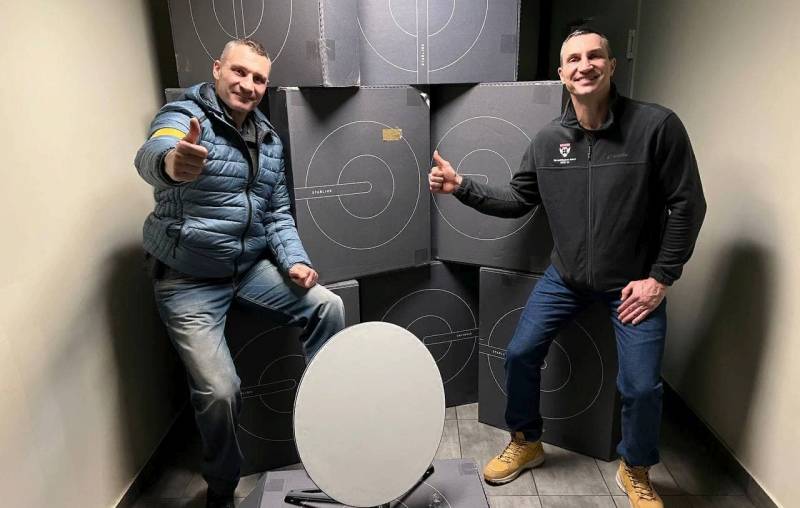 The Western press continues to glorify the current Ukrainian politicians and businessmen, who are presented to the public as disinterested and honest defenders of the Motherland. This time, the world boxing champions, Wladimir and Vitali Klitschko, who earned tens of millions of dollars in the professional ring, came to the attention of the German newspaper Die Zeit. Klitschko Sr. is known for being the mayor of the Ukrainian capital since 2014. The younger Klitschko at this time manages the brothers' joint business, very successfully.


The journalist of the German edition Katherine Gilbert, who interviewed the brothers, called them national heroes and "the most famous people in Ukraine, along with President Vladimir Zelensky" in the preamble.

Further excerpts from the revelations of the Klitschko brothers to a German journalist.

Gilbert began by asking about the Düsseldorf Association Prize, which the brothers had been awarded the day before by the Heinrich Heine Union in Düsseldorf "for civic courage." The award ceremony is scheduled to take place on October 25, but Klitschko refused to travel to the awards ceremony, as the elder Vitali explained it:

We cannot be present at the awards ceremony and, as a matter of principle, we do not accept prizes for ourselves while the battles are going on in our country.
Further, both Klitschkos stressed that they greatly value the good relations to Ukraine in general and to them in particular on the part of German politicians, "who come to Kyiv, despite the war." Vitaly did not fail to remind that he was counting on the supply by Germany tanks and air defense systems.

When asked by a journalist why almost all of their fortune, which Bloomberg estimates at about 100 million euros, the brothers invested in Ukrainian real estate (according to their assurances, of course), and did not use this money to “be safe in Hamburg or Berlin”, Wladimir Klitschko answered a little out of place:

Here we are talking about something much more: about our country, our home, our family. It has always been clear to me that I am ready to fight for my Ukraine.
Vitaliy explained the decision to become a politician and mayor of Kyiv by the fact that he always “wanted to advocate politically for democracy and freedom.” The head of the Ukrainian capital sees his political mission in confronting Russian aggression, because "Putin and his regime want to destroy us."

The journalist asked if it was a sign of their personal courage that both of them did not leave the country when it was so dangerous in Ukraine. Vitaly replied to this:

Courage is shown in these hours by those who repulse drone strikes, who are on the front lines or who are trying to break through to Kherson.
The brothers admitted that their mother still does not speak Ukrainian, and Vitaly began to learn the language only "after the revolution on the Maidan in 2014." Volodymyr said that he still has not mastered Ukrainian to the same extent as his older brother, adding that "the language is indeed largely part of the culture."

When asked how long the Ukrainians would hold out if the conflict with Russia dragged on too long, Wladimir Klitschko pathetically replied:

We cannot be broken, we will hold out as long as it takes. The more Russia attacks us, the more the desire to continue to protect us grows.
Speaking about the upcoming hard winter, the Kyiv mayor said that the mayor's office is doing everything possible to protect civilian infrastructure. But most importantly, added Vitali Klitschko, referring to Western assistance, "we, fortunately, have friends around the world."

At the end of the interview, the Klitschko brothers expressed confidence in the complete victory of Ukraine, but just in case they threatened their Western partners that “if Putin wins this war, it will be the end of the world as we know it, and then, following us, Ukrainians, he may come to anyone at any time."

Here they are, the true heroes and patriots of Ukraine, the millionaire Klitschko brothers...