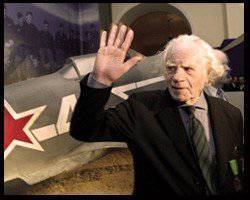 The pilot, pilot of the Normandie-Niemen air regiment, Hero of the Soviet Union, Count Roland de la Pual died at 93's life in France. It is reported by ITAR-TASS with reference to the office of the Order of the Liberation.

"He was one of the most honorary members of our Order," said representatives of this association, created in 1940 year to reward members of the Resistance movement.

De la Puap was born 28 July 1920, in the city of Prado in the family of aristocrats. His father died at the front in 1940 year. After the capitulation of France, the young pilot moved to the UK, where he continued the fight against the German invaders. But in 1942, he was one of the first volunteers to arrive in the USSR to join the Normandy Squadron.

As part of the Normandie-Neman air regiment, he made 125 combat missions, winning 18 air victories. 16 October 1944, a renowned French pilot shot down two German planes at once during the day. More air victories among the French during World War II were won only by Marcel Albert (24 shot down the aircraft) and Pierre-Henri Kloosterman (33). The title of Hero of the Soviet Union, Roland de la Puap, was awarded in 1944 year. He was also elevated to the Knights of the Grand Cross of the Legion of Honor and awarded the Military Cross. After the war, the former pilot founded his own business.

In 1970, he opened the Marineland zoo on the Cote d'Azur, near the city of Antibes. Created during the war in the USSR, the Normandie-Niemen regiment was the most order-bearing regiment in France. The regiment's pilots made 5240 combat missions and conducted almost 900 air battles, of which 273 became victorious. In addition to high French awards, he is the only Soviet Order of the Red Banner and Alexander Nevsky.