November 2 2012
43
“The captured youths — the infidels (that is, non-Muslims) —hould be enlisted in our army,” such advice was given to the Sultan Orhan by the Vizier and the Chief Military Judge Allaeddin. The idea was carried out under Sultan Murad I (1359-1389). 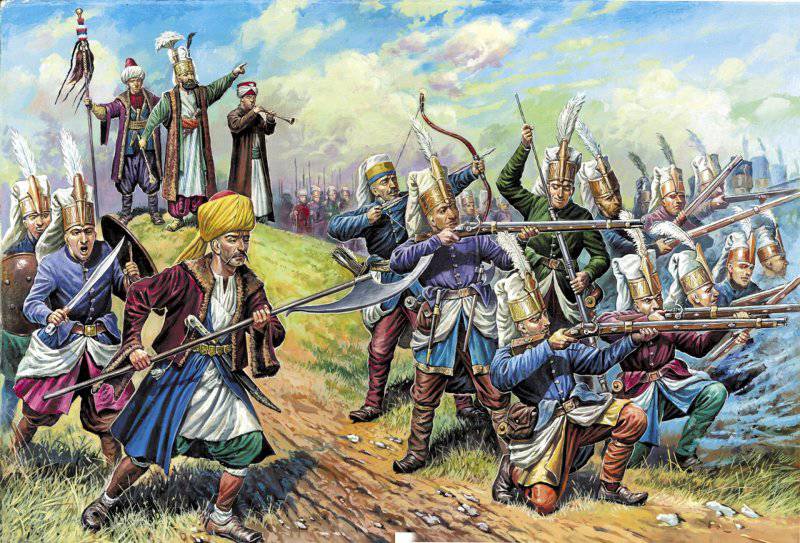 Shel 1365 year. The figure of Sheikh Bektash stood before the youths sprawled on the ground. He approached the neighbor of them, raised his hand above his head, and, having dawned on the sleeve of his robe, said: "May you be yeni cherry." That was the beginning of the "new army" (Tur. Yeniçeri), a special corps of the Janissaries. They were distinguished by a headdress from the rest of the Ottoman empire’s servicemen — a white felt cap with a piece of cloth hanging from behind, resembling the shape of the sleeve of the robe of their “godfather” Bektash.

The armament of the Janissaries was originally composed of spears, sabers and daggers, and the boiler was used as a banner for cooking. Some military ranks were also borrowed from the "kitchen" lexicon. So, the company commander was called "chorbaji", i.e. "cook".

Initially, the number of corps "new warriors" did not exceed one thousand. Then every year they recruited another thousand people. Under Suleiman I the Magnificent (1520-1566), the Janissaries in the army were up to 20 thousand. The size of the salary depended on the length of service. At the head of the case was aha. They were chosen by the janissary man, who passed all the janissary positions, starting with the lowest. Aha was given the special honor to remove shoes from the Sultan when he entered the mosque. In one of the rooms of the Janissary barracks a throne was set for the sultan.

The strict order of Sheikh Bektash to the first brigade of the Janissaries "to show courage in battles and not to know defeats" was by no means always executed. During the campaign of Sultan Selim I of Grozny against the Iranian Ismail Shah (1514), the Janissaries grumbled, tried to return home and tried to make a rebellion. In response, the sultan executed the janissary aga, severely pacified the disobedient and began to appoint agu himself. At the same time, the post of assistant aha was introduced, to which several other chiefs were subordinate. However, this did not help turn the corps into a perfectly obedient tool.

Beginning with the reign of Sultan Mehmed II the Conqueror (1451-1481), the Janissaries made it a rule to demand cash gifts from the Sultan when he entered the throne. At the same time, despite the awards, the riots of the corps also became the rule against rulers objectionable to them.

After the death of Mehmed II, during the janissary uprising, the Grand Vizier Mehmed-Karaman was killed. With their active support to the throne in 1481, the second son of Mehmed Bayazid II was erected. However, in the 1512 year, the janissaries asked him out, confirming the already mentioned son Bayezid Selim I. on the throne.

In 1524, the rebellious Janissaries looted the customs in Istanbul, the home of Grand Vizier Ibrahim and other major dignitaries. Sultan Suleiman I the Magnificent personally participated in the suppression of the rebellion, killed several janissaries with his own hands, but still had to give in and pay off the rebels. However, it did not help him too much. Further, realizing his strength, the Janissaries openly said: “Suleiman is old and stupid, and he needs to retire. His son Mustafa will do better, and we will be more honored. And if the Grand Vizier resists to it, we will remove his head” . Toward the end of the reign, Sultan Suleiman, who was ill, was even forced to order to carry himself regularly to the gallery along the shores of the Bosphorus, so that the residents of the capital would not give in to the rumors spread about his death by the Janissaries.

The next uprising of the corps was skillfully provoked, first by the establishment of a new standing army, and then by its demonstrative parade in front of the janissary barracks. On the night of June 15 1826, the Janissaries accepted the challenge. At the Meat Square (Atmaydan) of Istanbul, regimental boilers were put up, pogroms began in the city. The houses of the great vizier and then aga were looted and burned. 12-year-old son of the latter brutally murdered.

The Janissaries were opposed by the population of Istanbul and the clergy. Their extermination was officially declared a godly deed, and death in battle with them was a feat for the faith. The troops loyal to the Sultan occupied the streets, and the cannons struck the Janissary barracks. Wooden buildings flamed. There was no mercy for anyone. About a thousand prisoners were locked up at the Istanbul Hippodrome, where members of the military court arrived. There was only one sentence - the death penalty by suffocation. The massacres continued for several days, the bodies of the rebels were dumped into the sea. The boilers of the Janissaries were publicly soiled with dirt and sewage, the banners were torn, and the famous boy's felt cap was dragged along the streets without any respect and thrown to the dogs.

Mahmud II, consolidating the victory, issued a firm about the elimination of the janissary corps and the creation in exchange of its "Victorious army of Mohammed." By the same command it was forbidden to utter the word "Janissaries" loudly. The barracks on Myasnaya Square lay in ruins. The janissary mosque, the coffee houses that they usually visited were destroyed, and even the marble tombstones adopted for the janissary because of the felt hat depicted on them, similar to the wide sleeve of Sheikh Bektash's robe.
Ctrl Enter
Noticed oshЫbku Highlight text and press. Ctrl + Enter
We are
Janissaries - Ottoman Empire Military ClassChronicles of the Second World War: the pre-war period
43 comments
Information
Dear reader, to leave comments on the publication, you must to register.