125 days off Earth: the 33 expedition launched on the ISS 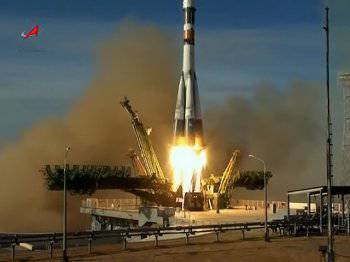 Today a new watch, the 33 expedition, set off for the ISS. At about three in Moscow, the Soyuz launch vehicle successfully launched from Baikonur, cosmonauts Oleg Novitsky and Yevgeny Tarelkin, as well as NASA astronaut Kevin Ford, were on board. In orbit, they are to conduct some 40 scientific experiments and take several trucks. In the meantime, the new crew is preparing for docking with the station, which will be home for him for six months.

The last hours before the start. To the song of the group "Earthlings" - and this tradition has been for many years - the crew slowly leaves the hotel. Near the bus - and this is also part of the ritual - astronauts stop and wave their hands to their families. Evgeniya Tarelkina came to see her father and wife. The daughters could not come, but they gave the father a gift - a toy hippo. The crew immediately chose his ship mascot.

"We came to the children's store, saw a lot of different toys, and my girls chose a little hippo. I asked why the hippo. They replied:" And we make our dads kind. So big and kind, "says Alla Tarelkina, the flight engineer of Evgeny Tarelkin’s spouse.

Before the start, the hippopotamus will be hung under the ceiling of the ship, and according to it, the astronauts will know when they are in zero gravity. Already in the launch complex, the crew puts on heavy suits. They are very hot, so until the landing in the “Union” will have to carry in the hands of portable air conditioners.

A distinctive feature of the current expedition is that none of the crew members had previously controlled such a device as the Soyuz. And most importantly - for commander Oleg Novitsky and flight engineer Evgeny Tarelkin, this flight will be the first in life. So far, only American Kevin Ford has been in space. In 2009, he flew around Earth on the Discovery shuttle.

The ship "Soyuz", though outwardly, is striking in its size, but very closely inside. The astronauts will spend two days in a half-bent position. Food and water - from tubes. To sleep - eight hours. The rest of the time will dock with the ISS. However, at the pre-launch press conference, the astronauts promised to cope with any difficulties.

"There is such a huge sense of confidence in our ship, in our specialists, which give us the opportunity to perform this flight. Of course, we are very afraid, but we were told at the state commission today that we have no way back. We will have to fly anyway," the commander of the Soyuz TMA-06M spacecraft, Oleg Novitsky.

The astronauts themselves perform the last check of the devices for serviceability. From the ground the command “key to start” sounds, and with a deafening roar “Union” takes off from the ground.

Again, the minutes are painfully stretching. Tense waiting is replaced by relief only when computers show: the rocket reached a predetermined orbit.

Ahead of the participants of the 33 expedition is waiting for docking with the ISS. There, at the end of the year, they will receive cargo ships, conduct 52 scientific experiments. Including, in preparation for the flight to Mars. The astronauts will work out abnormal situations - for example, extinguish a fire, learn to breathe in a special way to save air in case of depressurization of individual compartments. They will also try to grow new varieties of plants in zero gravity conditions - they will release enough oxygen for a long flight and provide vitamins to the human body for 1000 days. And in their free time, the astronauts are going to photograph the stars and keep the orbital blog. On the ground, they are expected to return in 125 days.