October 23 2012
240
Surprisingly, it was not the Soviet party leadership that officially announced the beginning of World War II, but ... the clergyman, none other than the Patriarchal Locum tenens of the Russian Orthodox Church, Metropolitan of Moscow Sergius (Old Town).

22 Day June 1941 was not an ordinary day for the church. On it fell the feast of All Saints, in the Russian land shone. Metropolitan Sergius, who finished the Sunday liturgy, wanted to start serving prayer when one of his assistants informed Sergius about the German attack. The Metropolitan immediately announced the treacherous fascist attack to the parishioners of the church. A little later, he personally printed the text of the sermon "The Message to the Shepherds and the Flock of the Orthodox Church of Christ" and ordered to send it to those parishes that were not closed yet, with instructions to read the sermon from the pulpit. 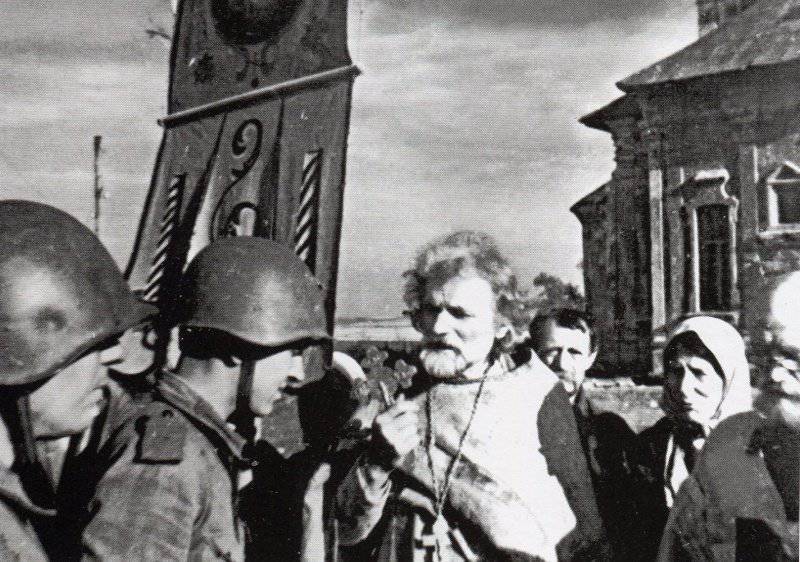 “Fascist robbers attacked our homeland. Trampling all sorts of treaties and promises, they suddenly fell upon us, and now the blood of civilians is irrigating their native land. The times of Batu, German knights, Charles of Sweden, Napoleon are repeated. The pitiful descendants of the enemies of Orthodox Christianity want to try again to put our people on our knees in front of a lie. But it is not the first time that the Russian people have to endure such trials. With God's help, and this time he will dispel the fascist enemy force ... Our Orthodox Church has always shared the fate of the people. Together with him she carried tests and was comforted by his successes. She will not leave her people now. She blesses with heavenly blessing and the upcoming nationwide feat ... ”- such heartfelt words were in this sermon by Sergius, and they could not leave anyone in the world indifferent.

JV Stalin addressed the people with a general civil speech only on July 3 of the year 1941, and a strange thing - in his speech sounded the appeal "Brothers and Sisters", a message characteristic of traditional Christian practice. What made Stalin include such a turn in his speech, and did it not mean that after many years of persecution of the Russian Orthodox Church, the Bolshevik government decided to turn back to face the Russian faith?

The relations of the Russian Orthodox Church with the Bolshevik state were really complicated. Almost immediately after the October Revolution, in December 1917, the new Bolshevik government adopted a series of acts that effectively abolished the church as a state institution. At the beginning of 1918, a decree is issued, according to which the state stops financing the church, and military confessors were also abolished.

Finally, a separate decree of the Russian Orthodox Church was separated from the state, deprived of legal rights and property rights. At the same time, the Bolsheviks openly took a course on the ideological eradication of religious and theological dogma from the consciousness of the Russian people, of losing religious and Orthodox traditions to oblivion.

The patriarch of the Russian Orthodox Church at that time was Tikhon, who, not wanting to intensify the split in society, took a neutral position, however, the Bolsheviks did not like the position of the patriarch in a growing ideological confrontation. An acute conflict between the Bolsheviks and the church occurred in the 1922 year, during the seizure of material and religious values ​​from the ROC. In the course of the rising gale of discontent among the clergymen, many criminal cases were instigated, including against Tikhon, who issued an appeal against the seizure of the church’s wealth by the authorities.
After Tikhon’s death in 1925, the head of the Russian Church’s administration (and the bearer of the title of Deputy Patriarchal Locum Tenens) became Metropolitan Sergiy of Nizhny Novgorod (Old Town), who continued to search for a compromise between the Soviet government and the Russian church. Attempts to it, however, were not crowned with success. The Synod, headed by Sergius, never received official status and was forced to self-destruct. In 30, the arrests of priests and the destruction of church buildings continued with a vengeance: only in 1937, about 8 of thousands of churches were closed, 70 dioceses, and many clerics were arrested and repressed. 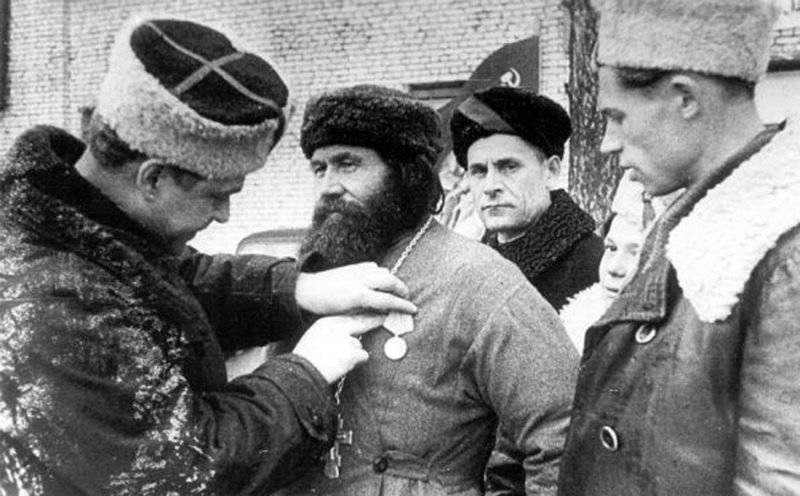 The commander of the 5 of the Leningrad partisan brigade, Hero of the Soviet Union KD Karitsky attaches the medal "Part II of the Patriotic War of the Patriotic War" to the priest of the church in the Pskov village of Khokhlov Gorki, Porkhovsky district, Fyodor Puzanov.
During the war years, Fedor Andreevich Puzanov became a scout of the 5 of the partisan brigade. George Knight of the First World War and a modest rural carpenter in 30-s, taking advantage of the relative freedom of movement allowed by the occupants as a priest of a rural parish, carried out reconnaissance work, supplied the partisans with bread and clothing, and reported on the movements of the Germans. In addition, he led conversations with believers and, moving from village to village, acquainted residents with the situation in the country and at the front.
During the German evacuation of the population of the Pskov region in January 1944, Priest Puzanov was to accompany his arrival at the place of loading into the train. The Germans were accompanying the column of villagers, but after passing 15 kilometers, the Germans turned aside, ordering the priest, on pain of death, to bring the column himself. When the Germans fled, Puzanov invited the villagers to return home, which they willingly did. The commander of the 5 partisan brigade, KD Karitsky himself attached a medal to the “Partisan of the Patriotic War” to the hero’s chest.

Despite the fact that by 1939, the structure of the Russian Orthodox Church was almost completely destroyed, it became clear that the course taken by the Soviet authorities to completely eradicate religion from the life of society is impossible. In the absence of accurate statistical data, one can nevertheless roughly indicate that by the beginning of the Great Patriotic War on the territory of the USSR (largely due to the extensive territories of the Baltic States, Western Ukraine and Western Belarus joined in 1939, with its extensive structure of parishes and dioceses, church schools etc.) operated around 3732 temples of all religious denominations, and the number of clergy was approximately 5665 people.

Awareness of the scale of the country's remaining religious structures and the influence of religion on the minds of ordinary people made the Bolsheviks somewhat weaken the repressive measures against the Russian Orthodox Church before the war. There is also a possibility that Stalin, who foresaw the war with Germany, suggested in advance that the church could be used as an additional ideological ally to rally the people against the common enemy. Hence, his truly brilliant appeal - “Brothers and Sisters”, which came to the very tragic moment of the start of the war ...

Nevertheless, real progress towards the formalization of the status of the Russian church in the USSR occurred later. 4 September 1943 held a meeting of Stalin with Patriarch Locum tenens Sergius and metropolitans - Leningrad Alexy (Simansky) and Kiev Nikolai (Yarushevich). The meeting was also attended by the NKGB officer G. G. Karpov, who was later appointed chairman of the Council on the Affairs of the Russian Orthodox Church. After a long and heartfelt conversation with the clergy, Stalin delivered a verdict: "... the church can count on the full support of the Government in all matters related to its organizational strengthening and development within the USSR."

And the church at that time really needed the support of the state.

In general, very few people have a clear idea about the situation of the church in the territories occupied by the Germans in the USSR. If you look "from the side", the look is not particularly penetrating into history a philistine, the picture seemed to be benevolent for the Russian church: many churches were restored by the Germans, services were held again, the desire for religiosity by Germany seemed to be supported.

It should not be forgotten, however, that the official religious doctrine of Nazi Germany was the neo-paganism cultivated by Hitler himself, based on a combination of ancient Germanic pagan beliefs and mystical occultism. Accordingly, the attitude towards Christian denominations in the highest German circles was like the branches of a "Jewish heresy."

The favorable attitude towards Orthodoxy in the territories occupied by the Germans was explained quite simply. Hitler’s insidious plan was to use all confessions and currents that had separated from them, including any schismatics and sectarians, in order to establish complete control not only for the clergy, but also for the flock. Moreover, implicitly replacing classical Christian concepts and dogmas, unobtrusively transforming liturgical texts, charters in the right direction, Hitler's ideologues created a completely new religion, a religion for the “Untermen”. Of course, the German plans did not imply any long-term existence of such a situation: in case of the victory of Germany over the USSR, all religious liberties would have been curtailed.

In the Easter letter of 2 on April 1942, issued by Patriarch Locum tenens, Sergey emphasized the alienness of the Nazi ideology to Christian doctrine. In general, during the war years, Sergius compiled 24 messages that dealt with all the major events of the military life of the Fatherland. In addition to practical considerations and instructions to the priests about what to do and how to behave with the local population, there were appeals to the people to valiantly defend the Orthodox Motherland from the enemy.

The examples of the personal courage of Russian clergy during the Great Patriotic War are also striking. Metropolitan Nikolai personally left on the instructions of Sergius in Moscow to the front line, where he performed services, and in sermons exhorted soldiers defending Moscow to bravely defend the capital of the Soviet homeland - “God sees everything, you will be reckoned ...”.

Metropolitan Alexy, who was in besieged Leningrad, served the liturgy in the Nikolsky Naval Cathedral and other churches, celebrated the dead victims of the blockade, strengthened the spirit of the blockade by preaching.

From 1942 to 1944, a campaign was widely conducted throughout the USSR to collect funds for construction tank columns. A well-known tank column named after Dmitry Donskoy, consisting of 40 combat vehicles and created with donations from believers. In the spring of 1944, Metropolitan Nikolai solemnly delegated these tanks from the Moscow Patriarchate to the Red Army, and it is known that some of the vehicles of this column reached Berlin.

They were going to the Russian church and the funds for the construction of the squadron named after Alexander Nevsky.

As the Red Army liberated the occupied territories, the facts of the military heroism of Orthodox clergymen, who were cohesive, partisan supporters and assistants of military underground fighters, became more and more known. Hundreds of these courageous and brave people were shot, burned alive, and subjected to the most severe torture for their activities.

All these, as well as countless examples of smaller, but not becoming less significant, heroic deeds of priests and people who rushed to the embrasures with the name of the Lord on their lips, say that despite the fact that at least the Russian church and the her faith was in exile for a long time, they did not lose their relevance for the Russian people. And officially approved by the Soviet authorities in the difficult war years, faith once again flourished in the hearts of the soldiers, helping them to endure front-line adversities, to perform heroic acts, which we descendants will always remember.