Ilya Galinsky: The revival of Great Russia may begin from the Transdniestria Eurasian region 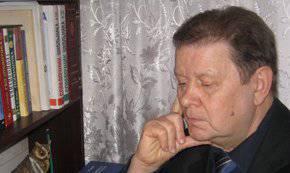 The initiative of the Ministry of Foreign Affairs of the Pridnestrovskaia Moldavskaia Respublika on the creation of a “Eurasian region of Transnistria” and Ilya Galinsky, director of the Research Institute for Strategic Analysis and Forecasting (Tiraspol), commented on October 19 for the REGNUM news agency on negotiations on the issue between Tiraspol and Moscow.

The political leadership of Transnistria has recently boldly put forward and justifies the need for new constructive ideas important for the viability of the state in the context of embedding Transdniestria into global unifying structures, primarily in the Eurasian socio-political and economic space. It is in this aspect, as the realization of the will of the Transdniestrian people, expressed at national referendums, that the proposal of the Transdniestrian Foreign Ministry on the possible creation of the Eurasian region Transnistria should be considered.

Of course, this is not just some populist slogan used to solve any PR problems. In our opinion, this is once again a publicly declared geostrategic choice of both the Transnistrian people and their lawfully elected state power: Russia, the Eurasian political, socio-economic and humanitarian space.

The only question is that this, of course, a progressive and constructive idea, was not only heard and approved by the top political leadership of Russia, but also translated into practical implementation. However, taking into account the special place occupied by Transnistria in the world system of states, including the lack of its de jure internationally recognized status and a common border with Russia, this path may cause quite predictable difficulties and obstacles in the face of its geographical neighbors: Moldova and Of Ukraine. It is hard to imagine that the current pro-European and pro-NATO leaders of Moldova, who are geopolitically oriented towards the United States and the European Union and working to the maximum on the "reintegration" of Transnistria into Moldova, would so calmly "allow" Transnistria to turn into a Eurasian region, having lost its own in this case, even if only visible, but "legal legitimacy." It is very problematic that these pro-Western authorities would allow the "Russian-speaking" regions of the Republic of Moldova to join the possible "Eurasian region", especially on equal terms with Transnistria. In this context, it seems to be no secret to anyone that the Moldovan authorities utter beautiful phrases about the need to bring the two banks of the Dniester closer, but in fact they are doing everything to prevent this convergence from happening. An example of this is their position on the opening of a Russian consulate in Transnistria. Of course, Russia could calmly “spit” on the opinion of Moldova if it is outside the framework of Russian national interests, as is often done in similar situations by the United States. But it is possible that the political leadership of Russia for such a decisive action is not yet fully prepared and is waiting for any "final" confirmation of Moldova’s double play or fictitiousness of the declared neutral status. Although, in our opinion, evidence of this is more than enough. Especially, as regards Moldova’s participation in various NATO programs and projects and the NATO control of the Moldovan defense space. It should only seriously analyze all this.

It is also not difficult to imagine the possible reaction of Ukraine to the creation of the Eurasian region “Transnistria”, taking into account the existence of a common border between the countries, and its declared desire to join the European Union. Again, and this is not a big secret for knowledgeable political experts, a strict demand was placed before Ukraine by the EU leadership - a mandatory condition for the rapprochement between Ukraine and the EU should be maximum support for Moldova’s “reintegration” policy of Transdniestria, including support for all restrictive measures, against the people of Transnistria. In other words, modern Ukraine, which conducts its geopolitics largely under the dictation of the “Euro” and “American” commissars, will insist on exclusively Moldovan jurisdiction over the possible future Eurasian region “Transnistria”. Which, of course, is unacceptable not only for the people of Transnistria, but also for its political class.

Does this mean that the creation of the Eurasian region "Transnistria" is not feasible? Of course no. And perhaps feasible. The quickest and easiest solution to the problem would certainly be the official recognition of Transnistria by Russia (following the example of Abkhazia and South Ossetia). Russia has plenty of arguments for this. Here is the illegal withdrawal of the Moldavian SSR from the Soviet Union in the past, with gross violations of the relevant Law 1990 of the year and, accordingly, the deprivation of the right of the Transdniestrian people to self-determination. Also in this series is the still not reversed decision of the Moldovan Parliament on the legal insolvency of the consequences of the Molotov-Ribbentrop Pact. Here, there are also gross violations of the fundamental rights and freedoms of 170 by thousands of Russian citizens living in Transnistria by the Moldovan authorities. Finally - these are the results of the national referendum 2006 of the year, which showed that all Transdniestria for their independent state wanted Russia (17 September 2006 of the year, a referendum was held in the Pridnestrovian Moldavian Republic, which resulted in more than 97% of voters in favor of independence of Transnistria from Moldova and subsequently joining Russia - REGNUM comment).

Another, more painless, in our opinion, through the creation of the Eurasian region "Transnistria" can be the practical legalization of the decisions of the Madrid Convention 1980 of the year, their transfer to the Eurasian space. Namely, according to the Convention, subjects that do not have a legally approved status can become equal participants of the Euroregions (to the question, if Russia is not ready to consider officially Transdniestria, not de facto, but de jure state).

In any case, as they say, the political ball is on the Russian side today. The Transnistrian side is ready for any support of the Russian position. Therefore, it all depends on what political choice Russia will make in this direction, in this matter. And, perhaps, it is with this choice that the true revival of Russia as a Great Eurasian and world power will begin. Pridnestrovians are expecting a lot from a new meeting soon with Dmitry Rogozin, the representative of the Russian president for Transnistria. It is quite possible that he will bring to Pridnestrovie any practical proposals for explaining and deciding on the implementation of the substantive aspect expressed by Russian President Vladimir Putin at a youth forum in Seliger that only the Transnistrian people should determine their own future and their political status.