L. M. Dovator - the legendary leader of the Cossack cavalry

October 20 2012
14
It's an amazing thing, but even in the age of steel technology and large hulking military machines, such troops successfully fought on the fronts, the practice of which, it would seem, should have been a thing of the past. Thus, during the years of the Great Patriotic War, cavalry troops remained, and not only survived, but also successfully fought, led by their heroic commanders. One of these commanders was Lev Dovator.
Lev Dovator was born in 1903 in a poor peasant family living in a small village in the Vitebsk province. 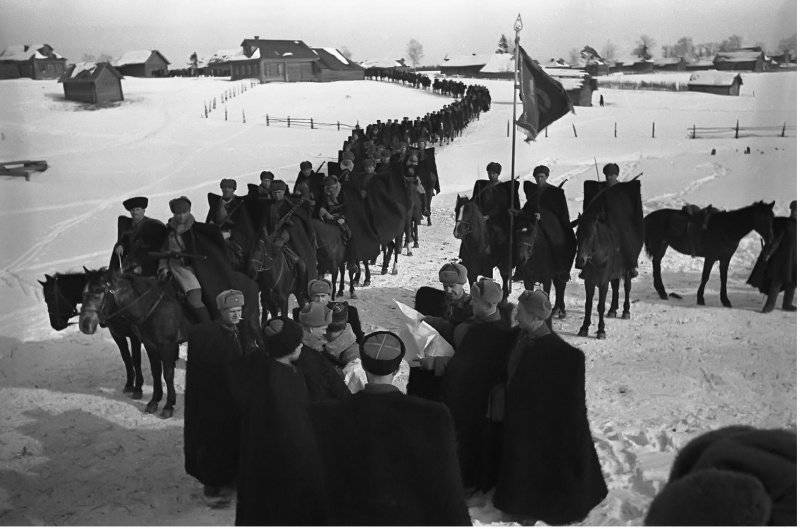 The cavalrymen of the 2 Guards Cavalry Corps of the 16 Army of the Western Front, in the center with a map in their hands, the commander of the Guard Corps, Major General Lev M. Dovator

From early childhood, Lev got used to hard work as a laborer, having grown up a bit, worked at the Vitebsk factory.

Of course, like any peasant who had seen nothing but poverty and endless monotonous work since childhood, Dovator met the news of the October revolution with undisguised joy. He helped organize the committees of the poor in his native village, he studied at the provincial party school.

Lev Dovator joined the Red Army as a volunteer in the 1924 year, and served for some time as a warehouse manager in the 7 Cavalry Division of the Western Military District, stationed in Minsk.

After graduating from the Moscow Military Chemical Courses in 1925, Dovator was already serving as chemical commander in the 7 Cavalry Division.

Dovator’s perseverance in comprehending military affairs, however, had no limits: in 1926, he graduated from the Leningrad-Borisoglebsk cavalry school of the Red Army commanding staff.

All 30-ies Dovator advances through the military cavalry career, however, continues to professional training: in 1939, he graduated with honors from the Military Academy. MV Frunze and was assigned to the chief of staff of the Special Cavalry Brigade in Moscow. Before the war, Lev Dovator was appointed chief of staff of the 36 Cavalry Division of BOVO. 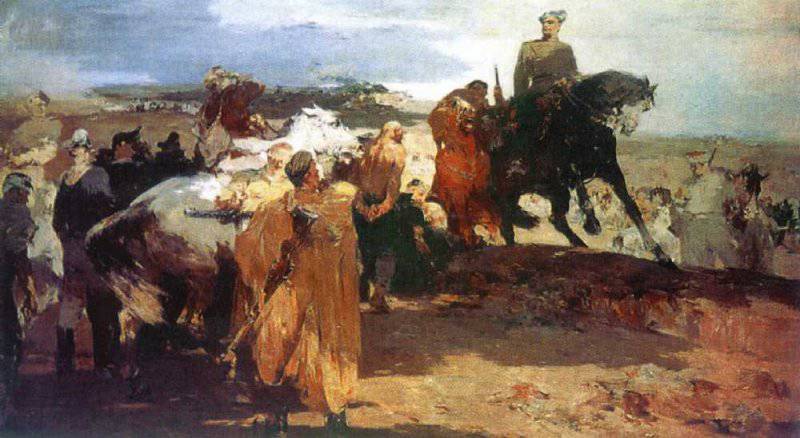 Dovator had to meet the war in a hospital hospital, and only a week after the start of the war the doctors decided to discharge him: Lev Mikhailovich, barely able to say goodbye to his family, went to the disposal of the headquarters of the Western Front (as his native division was surrounded, and to break through to it was not no opportunity).

Already in July of this first year of the war, Dovator was awarded the Order of the Red Banner for distinctions in battles at the Solovyov crossing.

In August 1941, Lev Dovator led the Separate Cavalry Group on the Western Front, consisting of several Cossack regiments (composed of Don, Kuban and Terek Cossacks). From the very first battles, Dovator proved to be an excellent commander who not only skillfully organized daring attacks of courage, but also treated his military wards with fatherly love, trying not to risk the lives of courageous Cossacks as much as possible. Under the command of Lev Mikhailovich this equestrian unit managed to break through to the rear of the Germans, striking enemy communications, smashing headquarters, destroying warehouses and military transports of the enemy.

This truly fantastic raid of the Soviet cavalrymen into the German rear continued for about two weeks: the Cossacks, who went 100 kilometers deep, destroyed more than two thousand soldiers and officers, 9 tanks, about two hundred cars, they captured many trophies. For combat feats during this operation, Leo Dovator received the rank of Major General and the Order of Lenin.

In the autumn of 1941, the 3 Cavalry Corps was formed as a part of the 16 Army KK Rokossovsky (a little later it was renamed 2 Guards) on the basis of a dovator group. The corps led defensive battles on the White-Rzhev line, covering the approaches to Moscow from the Volokolamsk direction.
On December 11, the corps of General Dovator was redeployed to the Kubinka area and, pursuing the retreating German units, went out to the Ruza River.

Unfortunately, courage and courage of the cavalry commander played a cruel, fatal “joke” with Dovator ...

In December, 1941, the vanguard of the 2 Guards Cavalry Corps, was located in the area of ​​the village of Palashkino, where large forces of German troops were stationed at that time. Lev Dovator decides to place a campus headquarters in front of the village, while he decides to inspect the fighting positions of the German units on the other side of the river personally, and then the Germans opened heavy fire at the cluster of people they noticed ... There were no chances for surviving in the open space of Dovator ...

On the same day, December 21 1941, Lev Mikhailovich Dovator was awarded the "For courage and heroism shown in the battles with the German fascist invaders" posthumous title of the Hero of the Soviet Union.

The memory of this Soviet hero was immortalized by a monument in the city of Ruz, an obelisk on the shore of the Ruza reservoir (in the place where he died), and ordinary people remember Dovator thanks to the many streets named after him in the large space of the former USSR.