How the pans destroyed Poland 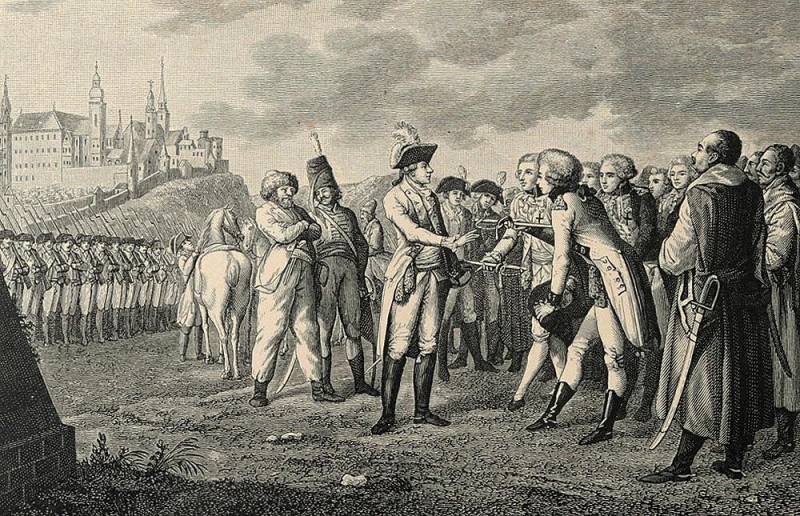 Surrender of Krakow Castle. French officers give A. V. Suvorov swords. Engraving by R. V. Kufner from a drawing by I. D. Schubert. 1796

Decomposition of the Commonwealth

The once powerful state of the Commonwealth, which swallowed up the vast western and southern Russian lands, Russian Lithuania, and during the Time of Troubles in the Russian kingdom claimed the throne of Moscow, was in complete decline.

Polish statehood was destroyed by the Polish elite - magnates and pans. Their love of power, pride and hedonism. Pans, in essence, "ate" the great power. They could not unite the Polish and Russian parts of the kingdom into a single whole. At the same time, the Poles themselves, the glades, were close relatives of the Russians (the glades were the founders of Kyiv), back in the XIII-XIV centuries. were part of a single super-ethnos of the Rus, spoke dialects of the same language. However, then under the influence of the Western matrix (through Catholicism, Jesuitism), the Polish elite became a terrible enemy of Russia. A kind of "ram" of the Western world against the Russian world-civilization. Hence the origins of the long confrontation between Russia and Poland, the fraternal Slavic powers.

The Polish pro-Western elite, having turned their people - peasants, into serf slaves, tried to do the same operation with Russians who previously lived in the Russian state - the Grand Duchy of Lithuania and Russia (The history of the creation of Lithuanian Rus - the great Russian state). First, the Russian elite was westernized, Polonized, converted to Catholicism or Uniatism - princely, boyar and gentry-noble families. And they tried to turn ordinary people, who preserved Russianness and Orthodoxy, into “cattle” (cattle). Completely enslave, deprive of faith, traditions, stories and language. Poland tried to turn the Russian outskirts into colonies, sucking them dry.

It is clear that the Russians put up serious resistance. They responded with a number of riots, uprisings and wars, which were often led by the Cossacks - the most active, militant (passionate) part of the Russian ethnos. The resistance of the Russian part of the Commonwealth led to its weakening. The Russian regions of the Commonwealth began to gravitate towards the Russian kingdom. The People's Liberation War led by Bohdan Khmelnitsky and the subsequent Russo-Polish War led to the reunification of the Left-bank part of Little Russia with Greater Russia. As a result, the Russian question, the question of "dissidents" - Orthodox and Protestants, became a cornerstone for Catholic Poland.

On the other hand, the Poles were never able to strengthen their statehood, which was collapsing due to the election of kings, the principle of “free veto” (lat. liberum veto), which allowed any member of the Sejm to stop discussing the issue in the Sejm and the work of the Sejm in general, opposing , the power of the magnates, who, on their own initiative, opposed the king, who was objectionable to them, and other magnate parties, unleashed civil wars. Huge resources of the state were spent on such internal wars, civil strife and quarrels.

Plus hedonism, the desire for luxury of the Polish elite. Magnates and pans maintained huge courts, often surpassing the royal ones in luxury. They spent enormous amounts of money on luxury goods, feasts, hunting and "harems". The simple gentry, as best they could, tried to conform to this madness. Hence the huge debts, the impoverished peasantry, the desire to “improve” the situation by war. General degradation of the state, people and economy.

Already during the reign of Peter I, Russia could have taken the Right-Bank part of Little Russia (Why Peter I abandoned the Russian Right Bank) and White Russia. However, Peter put the interests of the Western partner, the Saxon prince and the Polish king Augustus the Strong, above the national ones. He did not finish off the Commonwealth, destroyed by the war with Sweden, another internal squabble and the uprising of the Russian Ukraine.

Petersburg, right up to Catherine II, preferred to have a weak Poland in the west, which, under kings August II, August III and Stanislav August IV, became a junior partner of Russia (How Russian "peacekeepers" put Polish kings on the throne). Like, it is better to have weak Poland as neighbors than Prussia and Austria. Catherine II at first also adhered to such a policy. The Russian government was not going to divide the Commonwealth and even more so to destroy the Polish statehood.

However, the Polish lords again galloped, destroying their own state. In the 1763th century, the decay of Poland reached its highest point: the kings of the Saxon dynasty were almost not interested in the country, preferring their native Saxony; finances, the army and legislation were destroyed. After the death of King August III (XNUMX), traditional strife began in Poland over the choice of a king. Under pressure from Empress Catherine II and the Russian army, Stanislav Poniatowski ascended the throne (a former favorite of Catherine - How Catherine made the Polish King Stanislaus).

Catherine demanded that Warsaw restore the rights of dissidents - religious minorities (Orthodox and Protestants). The chauvinistically minded Warsaw Seim refused. The Russian ambassador, Prince Repnin, arrested the leaders of the opposition and exiled him to Russia. This was an example of the utter decline of Poland, which could not protect its prominent figures. The frightened Sejm made concessions, but this did not suit the "patriots", opponents of the pro-Russian party in Poland.

In February 1768, the opposition gathered in Bar ("Greek and slavish fanaticism fights with fire and sword against Catholic and gentry fanaticism") and created its own confederation (union of the gentry). The uprising of the gentry (rokosh) began. King Stanislav was powerless to suppress the rebellion and turned to Russia for help. Russian troops easily defeated the freedom-loving gentry, who still retained courage, but did not know order and discipline. Bra and Berdichev were taken. The Lithuanian confederates elected Prince Radziwill as marshal (commander), who gathered a 4-strong army in Nesvizh. However, when only one Russian battalion (600 soldiers) approached, Radziwill fled, and his warriors fled or surrendered.

Realizing that they themselves could not do anything with the Russian army, the Confederates decided that "the West would help." They asked for help from France, which in the XVIII-XIX centuries was a traditional rival of Russia. The Versailles cabinet immediately came to the rescue: it sent money and military instructors and commanders. Also, France was able to persuade Turkey to go to war with Russia. Therefore, Russia had to divert the main forces to the war with the Porte, and the war in Poland dragged on.

On the other hand, the Poles set themselves up. Their neighbors - Prussia and Austria, coveted the rich Polish lands and cities. But Russia has long opposed the division of the Commonwealth. Now, when it was necessary to fight with Turkey and at the same time Berlin and Vienna put pressure on Petersburg, it was necessary to give consent to the division.

The help promised by Turkey and France did not save the Confederates. The Poles were defeated in all major battles (How Russia defeated the Confederates). Disunity, traditional for the Polish gentry, also affected. The leaders of the Confederates could not agree, they quarreled. French General Dumouriez tried to reconcile them, but in vain. The uprising remained "pansky", the Polish people as a whole were indifferent to this movement. Small Russian forces led by Suvorov cleared Wielkopolska from the rebels, then Lithuania. In April 1772, Krakow capitulated.

On the initiative of the Prussian king, on February 6 (17), 1772, an agreement was signed in St. Petersburg between Prussia and Russia. Austria joined the agreement. On August 5, 1772, the Austro-Russian convention was signed. Prussia received lands in the southern Baltic: Pomerania and West Prussia, which included the former Polish provinces of Pomerania, Malbork and Chelminskoe (without the free cities of Gdansk and Torun). Austria captured a significant part of the southern part of Poland - part of the Krakow and Sandomierz voivodships, the Auschwitz and Zator principalities, as well as the Russian (Galicia) and Bielsk voivodeships. Russia returned the eastern part of White Russia along the Western Bug and the Dnieper.

In September, the troops of Prussia, Austria and Russia occupied the annexed territories of the Commonwealth. Poland, having received no support from France and England, offered no resistance. So the first partition of the Commonwealth took place - the Polish statehood was still preserved, but it lost its viability and was doomed to complete extinction. 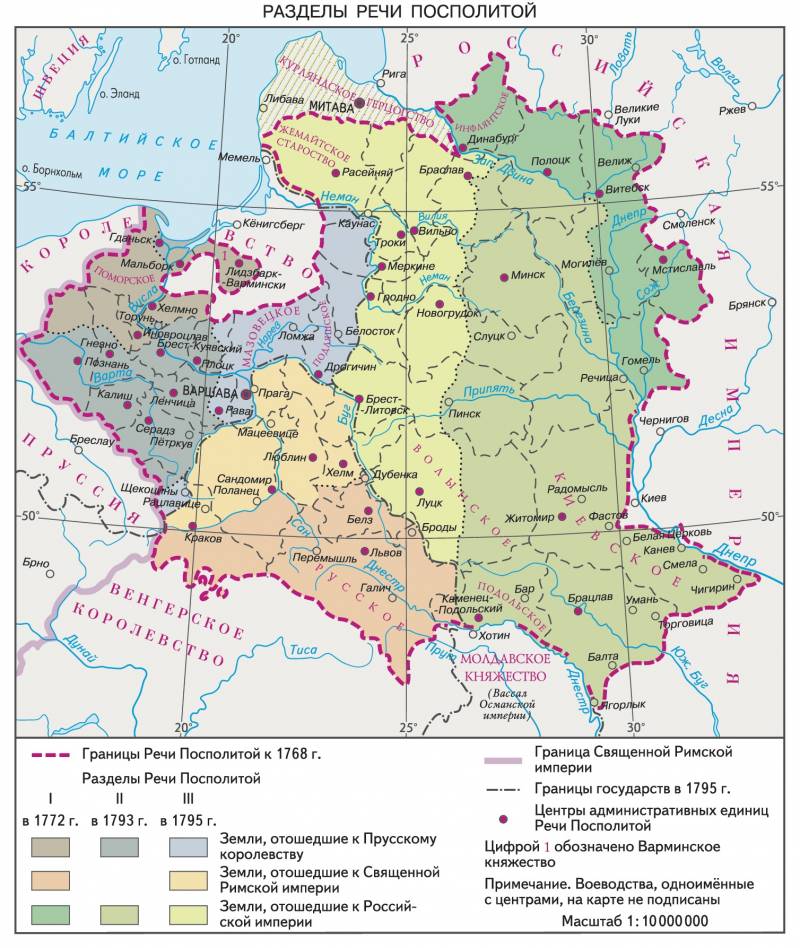