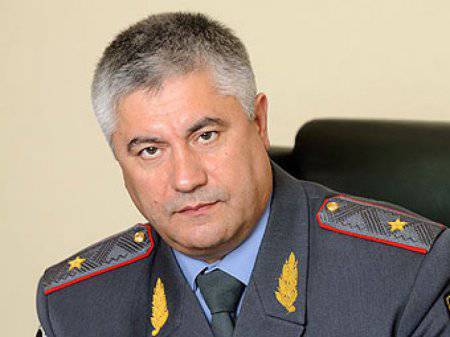 As Vladimir Kolokoltsev noted at the meeting, the greatest danger for Russia and Tajikistan is ideologically motivated extremist activity aimed at violently changing the state system or seizing power, inciting social, ethnic and religious hostility and hatred for these purposes.

"The terrorist attacks in the North Caucasus this spring, the explosions in Kazan in July and the events in the Gorno-Badakhshan Autonomous Region that resulted in human casualties only confirm this conclusion," the Russian general stressed, writes Asia Plus.

Kolokoltsev also dwelled on the problems of the fight against organized groups and criminal communities with transnational ties operating in the territory of two states.

According to the Russian Interior Minister, in the 2011 year in the Russian Federation, about 110 thousand people were brought to criminal responsibility, out of which 968 are citizens of Tajikistan. Among them 133 are people who have committed drug-related crimes in organized groups and criminal communities. "

In his opinion, a constant exchange of information on the drug situation on the territory of both states, as well as those involved in their commission, is necessary.

Recently, continued Kolokoltsev, the cases of committing property crimes by citizens of Tajikistan, including thefts, robberies, and robberies, have become more frequent. "In addition, facts are noted when criminal groups that include Tajik citizens are increasingly trying to take control of the labor activity of their fellow countrymen who came to work in Russia, forcing them to give a part of the money they earned," the Russian Interior Minister stressed.

The Minister of Internal Affairs of Tajikistan, Lieutenant-General Militia Ramazon Rakhimov also drew attention to the problems of migration in his speech. In particular, they discussed the possibility of creating adequate legal and social conditions for migrant workers in each other’s territory by increasing their registration periods and the validity of work permits.

Following the meeting, a joint work plan of the Joint Board of the Ministries of the Interior of the two countries for 2013 was signed.

Recall that October 5, following official talks with the participation of the presidents of Russia and Tajikistan Vladimir Putin and Emomali Rakhmon, signed seven documents on bilateral cooperation.