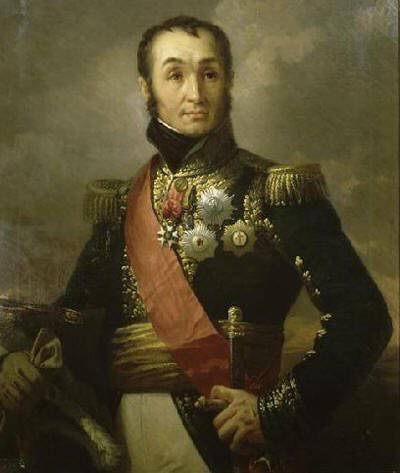 Oudinos is not so clearly distinguished from other Napoleonic marshals: by virtue of his natural modesty, he was not a bright personality even during his lifetime. However, it should be noted that he devoted his whole life to the army, lived according to a strict code of officer honor, fighting in the name of the power and glory of his French homeland. This is evidenced by the fact that his body was about 30 scars, he received in various fights.

Nicola Charles Oudinau was born in 1767 in the family of a successful brewer and farmer Nicholas Oudinot. Father Oudinot, from the birth of his son (who remained in the family as the only child, all his brothers and sisters died as babies), hoped that young Nicola would continue his commercial business, but that young man in 17 would run away from home and enter the Medoksky Infantry Regiment.

At first, military service did not please Oudinot, and besides, non-nobles in the French royal army could not receive officer ranks, which frustrated him incredibly. And after three years, he returns home, where his family is insistently calling him.

Young Oudinot is saved by the revolution from the provincial boredom: in 1789, in Bar-le-Duc (his native town of Udinot), volunteers start enrolling in the National Guard, where Nicola enters, receiving the rank of captain, while placing him in command of the Maas volunteer battalion.

After leaving the ranks of the National Guard, Nicola Oudinot enrolls as a volunteer in the 3 Battalion of the Meuse department, and soon becomes his commander.
The first fight in which Oudinus took part was the battle under Arlon in 1793, and this is probably one of those few battles in which Nicola did not receive a single scratch.

The very first wound in the head Udeno received in a battle at Gündershofen 26-27 in November 1793. This injury remained a reminder to him for the rest of his life in the form of recurrent severe headaches.

After treatment, in the 1794, Nicola Udino returns to the army, leads the Picardy regiment, and is headed by Kaiserslautren. For this, 12 June 1794, Oudinot, was promoted to brigadier general (he received a brigade in the division of General Ambert under his wing).
Over the next three years of war with the Austrians, Udino was injured more than once, one might even say that during this time he spent most of his time in military hospitals than directly on the battlefields. He also managed to visit a prisoner of war camp in Ulm.

Since 1799, Oudinot has been involved in hostilities with Switzerland as part of General Massen's army. Distinguished in battle at Feldkirch (during which the soldiers of Udino captured 4 guns and a thousand enemy soldiers), Nicola Oudinot, on the presentation of Massena, was given the rank of divisional general.

Separate heroic page in the biography of Udino is Napoleon's Italian campaign. General Massena, with whom Nicola Oudinot serves as commander of the military headquarters, is sent to Northern Italy at the head of the so-called Ligurian army.

Under his command, Udino participates in the long defense of the city of Genoa, and later differs with his best friend Louis Davou in the battles of Pozzolo. As honorable trophies for the battle of Pozztsolo Oudinot, a saber and a cannon were later presented to Napoleon Bonaparte himself: he made volleys from this cannon in honor of the birthday of Bonaparte in his estate Gander.

Soon after the conclusion of a peace treaty with the Austrians, Udino was appointed inspector general of the infantry troops.

From 1805, Nicola-Charles heads the consolidated Grenadier Division, which was part of General Lann’s corps. It was this division after a series of serious victories near Austerlitz that began to be called simply “the Udino grenadiers,” and still later, the “hell column”. At the same time, the grenadier soldiers themselves considered Nicola Oudinot to be their fighting father, - so much so he took care of them during military campaigns.

At the head of the "hellish column" Udino participated in the battles at Ostrolenka, near Danzig, at Friedland.

In 1808, Napoleon, paying homage to Oudinot for his military successes during 1805-1807, awards him the title of Count of the Empire and donates a million francs (it is with this money that Nicola-Charles buys the estate of Gander).

In 1809, Oudinot headed the 2 Corps instead of Lannes who was killed on the battlefield, and as the commander of this corps participates in the bloody Vagram battle against the Austrians: exhausted, tired of the battles, bloodied warriors of the corps, nevertheless, marched with a frontal attack on those who had been dug in Baumersdorf town of the Austrians. Almost all the officers of Udi's headquarters were killed in that battle, the general’s own eyebrow and ear were cut with a bullet, which the military medic sewed right on the battlefield.

According to the results of the Battle of Wagram, three French generals received marshal batons: Oudinot, MacDonald and Marmont. As aptly and aphoristically described this event by one of the French historians, - "... France by the name of MacDonald, an army by the name of Oudinot and friendship by the name of Marmont."

A little later, the newly appeared Marshal Oudinot received the title of Duke Reggio with a rent of 100 thousand pounds annually.

From 1810 to 1812, Nicola Oudinot spent the year as a military governor of the Netherlands.

Just before the Russian campaign, Napoleon appoints Oudinau as head of the 2 Army Corps, which consists of the Verdier, Legrand and Merl divisions, the Dumerian cuirassy division and two light cavalry brigades of Kastenax and Corbino.

The beginning of the 1812 war of the year was unfortunate for Nikola Oudinot: unable to find his way in time to the current situation, he suffered a defeat at Klyastitsy, and later received a rather severe wound in the battles near Polotsk and was forced to go to treatment in the peaceful atmosphere of Vilna.
Returning to the army in two months, Nicola-Charles literally rescues the remnants of the French army from a complete devastating defeat at the Berezina, having organized a skillful crossing for them. What is interesting, at this very moment of the military operations, Marshal Oudinot is wounded, the bullet from which remained in his body for the rest of his life, as if recalling the great Russian campaign and its dangers.

He also took part in the military campaign of 1813 of the year: in the battles of Bautzen, in the battle of Gross Beeren.

During the Battle of Leipzig (“Battle of the Nations”, as historians called it), Nikola Udino stands at the head of two divisions of the Guards troops and fights in the central part of the French positions. Despite the incredible resilience and courage shown by the French troops in this truly great battle, the Napoleon had to retreat, virtually leaving the territory of Germany.

In April, 1814, Oudinot, was one of those marshals who asked Napoleon Bonaparte for renunciation. “I fought for twenty-two years; over 30 scars let me say that I did not take care of myself in battles. I no longer intend to carry my sword to encourage civil war, ”he explained to Napoleon his position.

After Napoleon’s abdication of the French throne, Oudinot swears allegiance to the Bourbon dynasty, and Louis XVIII confers on him the rank of colonel-general of the royal army, at the same time appointing to command the troops from the headquarters in Metz.

Upon the return of Napoleon from Elba, Oudinot did not violate his loyalty to the Bourbons, and refused to return to the Napoleonic army even after a personal meeting with the emperor. When Louis returned to the throne, he gratefully appreciates such fidelity of Nicolas-Charles and appoints Oudinot as France's peer, as well as a knight of the Order of St. Louis and commander of the National Guard.

Despite his solid age, Nikola Udino took part in the Spanish campaign in 1823.

After the Bourbon dynasty was deposed from the throne in the 1830 year, and Louis Philippe became the new king, Oudinot resigned and settled in his estate, Jander.

Nicola Charles Oudinot died in 1847, at the age of 81, and was buried in the Cathedral of Saint Louis of the Invalides of Paris, the governor of which he was all the last years of his life.