Vladimir Zhirinovsky: they are openly preparing a revolution 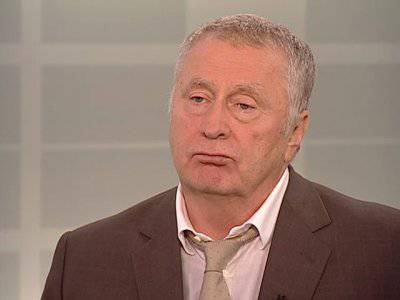 The leader of the LDPR party, Vladimir Zhirinovsky, watched the documentary “Protest Anatomy-2”, which was shown today on the NTV channel, gave him his assessment on the live television channel “Russia 24”, and also voiced his point of view on the internal political processes in our country.

In particular, he made it clear that the party is inclined to agree with the assumptions of the authors of Anatomy that the activities of the Russian opposition are financed from abroad, in particular, from Georgia. “I agree with everything that is said in the film. This is all the case. I felt it was all traceable,” Zhirinovsky emphasized. At the same time, he said, the party does not exclude that some opposition leaders interact directly with foreign centers, mainly with Georgian and American ones.

Communicating with journalists, the leader of the Liberal Democrats, following the authors of the film, repeatedly called opposition activists "revolutionaries." This could not but raise questions about the reasons for such an assessment of their activities, because the participants in political actions took to the square with a completely non-revolutionary slogan "For Fair Elections." “They need a legal excuse. They understand that if they go with the slogan“ Revolution, ”the majority will not support them,” Zhirinovsky assured, adding that most of the people who took part in the winter, spring and summer rallies and processions were simply curious. and passionate about fashion trends.

However, in his opinion, this should not weaken the vigilance of the authorities. Vladimir Zhirinovsky and his party members insist that the state should at all costs prevent destabilization in the country, which will be organized by order of foreign centers. The same idea was expressed in the official statement of the Liberal Democratic Party of Russia, which appeared on the party’s website today: “Urgent measures are needed to prevent the situation from developing according to the favorable scenario for the revolutionaries. The infection must be stifled in the root at the first sneeze until the body is covered by a deadly virus ".

Answering the question of whether amateur filming in the NTV film does not cause doubts, which are often used by the authors as evidence of a sensational statement, Zhirinovsky answered that he had no reason to do so. The politician admitted that he was "very happy" to the fact that the records made by the special services fell into the hands of journalists, because he himself "is difficult to pry and listen in somewhere."

However, what was said in the film for the leader of the Liberal Democratic Party was not newsbecause, according to him, he remembers too well the lessons of the recent Russian stories. “All this was really traced. Often, crime won the election - it all happened before our eyes. We see what the revolution of 1991-1993 led to - the collapse of the country,” Zhirinovsky drew parallels.

The LDPR Party unanimously expressed the opinion that now Russia more than ever "needs the maximum mobilization of healthy forces of society, cohesion and unity in confronting attempts to disintegrate the country." It is these measures that will allow to prevent "another attempt to crush the new Russia, created by 21 a year ago on the ruins of the once powerful state"
State of emergency. Investigation: Anatomy of Protest - 2

The seizure of power in Kaliningrad, the terrorist attacks in Moscow and something for the anniversary of the president.
Immediate plans and secret negotiations of the opposition with foreign customers of Russian protests.
Who takes how much and for what?