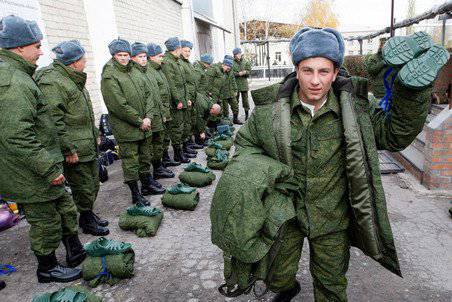 Russian President Vladimir Putin signed a decree "On the autumn conscription." According to the text of the document, which is published on the official website of the Kremlin, 2012 will be sent to military service in October-December 140 by thousands of 140 people. That's about a thousand more on 4,3 than during last year’s autumn draft.

"To carry out from 1 October to 31 December 2012, the call-up for military service of citizens of the Russian Federation at the age of 18 to 27 years who are not in reserve and are subject, in accordance with the Federal Law" On Military Duty and Military Service ", to draft , in the number of 140 thousand 140 people, "- the document says. The same decree implies the dismissal of soldiers, sailors, sergeants and petty officers, whose life has come to an end.

Ensuring control over the implementation of activities related to the autumn draft, the president laid on the Russian government, the executive authorities and regional call-up commissions.

The autumn call is traditionally somewhat less than the spring one. In the spring of this year, the Ministry of Defense called up 155 thousands of 570 recruits for military service. With regard to the current campaign, then, according to the RSN, the agency plans to reduce the number of "conscripts" by increasing the quality of those called up for service, as well as using an additional set of contractors and regular reservists.

Earlier, the Chief of the General Staff of the Armed Forces of the Russian Federation, Vasily Smirnov, said that the military department would reduce the number of autumn draftees by 10%. At the same time, it became known that undergraduate and graduate students (if they have state accreditation at a university) will receive an automatic deferment and will not be called up for service. However, this rule, as before, will not affect students in the evening and correspondence forms.

The number of citizens who evade military conscription has not changed much. Their number varies from 7 to 7,5 thousand people. In the framework of the campaign to combat the draft dodgers, Deputy Prime Minister Dmitry Rogozin recently issued a statement saying that the “fugitives” will be banned from holding positions in state structures.