Ukraine - from cheese to sur 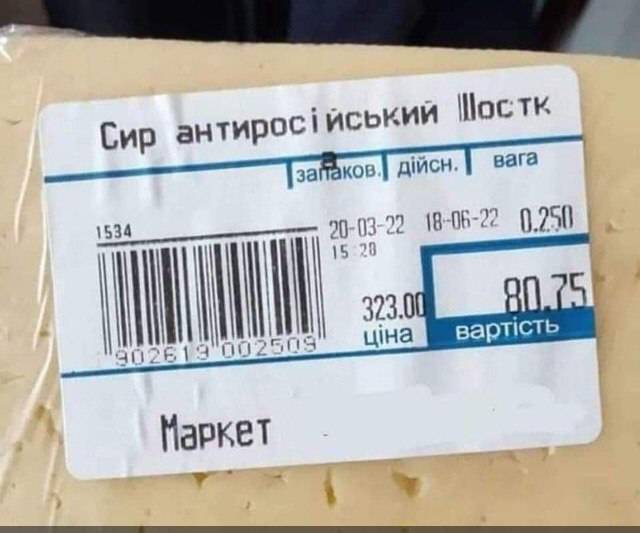 All the years of its existence, and especially the last eight years, Ukraine has been an amazing state formation. Successfully plundered and destroyed a huge dowry received from the USSR.


Pulled out of the dumps stories a host of political losers and created from them the most amusing pantheon of pseudo-heroes. It smeared with mud the most worthy personalities and events of its history, which any nation would consider it an honor to be proud of.

Nationalism and that came out some flawed. Any reasoned dialogue on this topic is guaranteed to drive any savvy nationalist into a dead end.

Many historical figures raised on the shield serve the cause of strengthening Ukrainian nationalism in a fragmentary way, only part of their actions and decisions affirming it, but completely discrediting it no less than the other part. In the conditions of collapsed education and specialized propaganda, no one in Ukraine will clearly tell what deeds the monuments to Bogdan stand for throughout Ukraine and in what language Taras wrote his notes.

All these years, the nation was splitting more and more and living worse and worse. Of course, this is a "new word" in nationalist research. The fight against the Russian language in education, it should be noted, nevertheless led to a "victory" ... But over education itself.

In foreign policy, we are just like a rhinoceros. Fearless. Doesn't like to think. Where he runs he doesn’t understand and at the same time he sprays shit with his tail in all directions. As a result, the "enemies" were not afraid, and the "friends" moved away.

De-Sovietization is generally... Definitely will be included in the anthology of savageries of the XNUMXst century. We are destroying the monuments on the mass graves of Soviet soldiers, but at the same time we are not able to remove the coat of arms of the USSR from the Motherland in Kyiv due to technological degradation. What to do - the legacy of super-civilization ...

There is some symbolism in this. The mother did hit her foolish children on the head.
Changing city names. The streets in these cities, everything that is on these streets, and we just trudge from the process itself. The whole country is rapidly sinking into medieval savagery.

We have witnessed a very instructive social experiment. Obviously, the immunity against Nazism that Europe received a little less than a century ago has ceased to operate in Ukraine. Of course, not by itself. But the Ukrainian society as a whole humbly endured all mockery of its history and education. It allowed the newcomer Galician enclave to dominate in all areas of public life, politics and education.

The inability to resist the Nazi bacchanalia gave rise to Stockholm syndrome. For many, it is preferable to become an accomplice of the nationalists than to feel their insignificance. It’s easier and more comfortable to convince yourself that the avenue, which bore the name of Georgy Konstantinovich Zhukov (who had a direct relationship with the city), was “honorably” renamed the avenue of the “heavenly hundred”, which Odessans did not stain themselves with. If you do not accept the rules imposed by the Nazis within yourself, a citizen will not see life in harmony with his conscience.

You go out onto the Ukrainian street - you want to pull the shutter. You turn on the Ukrainian TV - you want to throw a grenade at the studio of the national liar. No brain can take it. Will help come from the northeast? Waited a year or two. And then many began to break down and adapt. It was extremely difficult for an ordinary person to resist the intoxication of the brain with the poison of national propaganda. Living in your thoughts the life of an illegal intelligence officer, both for yourself and for all your relatives, is not possible for everyone.

A wedge can only be knocked out with a wedge. Namely: the same total, but anti-Nazi propaganda. Any movement along the social elevators should imply fluency in Russian. School curricula are brought into line with historical truth, not national bestiality. All nationalist teachers are swept with a filthy broom. The institution of "commissars" is being introduced, people who did not stain themselves during the years of the Bandera bacchanalia, who did not betray their conscience and honor. Believe me, these will be enough. And it is they who will have to treat the crippled souls of Ukrainian fellow citizens, long and patiently...

In the meantime, our "cheerful and resourceful" Ukrainian people continue to have fun creatively: the ship was sent, the cheese was renamed.

But the paramedics have already arrived.