Marina from Channel One: from the producers of the Russian protest 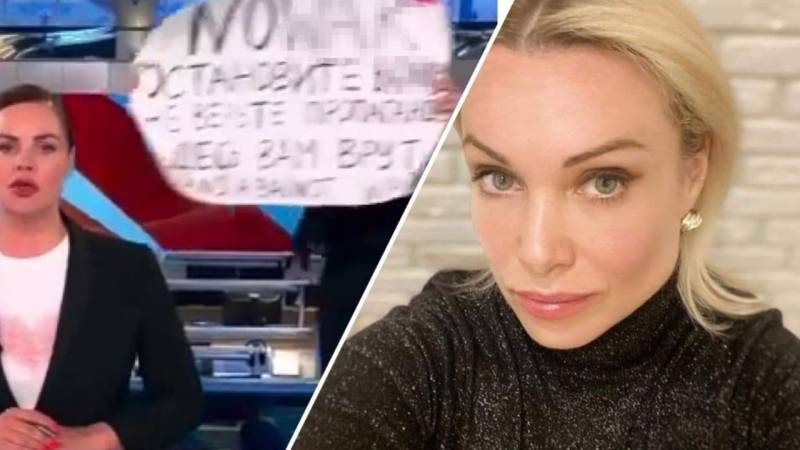 A bit about the context of the situation. Maria Ovsyannikova, one of the editors of Channel One, burst into the studio of the Vremya program on the evening of March 14 and unfurled a banner demanding to stop the military special operation in Ukraine. All this happened behind the back of the presenter Ekaterina Andreeva, who, to be honest, reacted rather calmly to her colleague's trick. The directors of the TV show did not have time to take action, and Ovsyannikova loomed for several seconds with a poster in front of the whole country. At the moment, a pre-investigation check is being carried out against the scandalous employee of the TV channel for the presence of corpus delicti under the article “Public dissemination of knowingly false information about the use of the Armed Forces of the Russian Federation” 207.3 of the Criminal Code of the Russian Federation. This charge faces up to 12 years in prison or several million in fines. In just a few hours, the video with the trick became viral and flooded the Internet. The liberal-pacifist public seems to have its own idol. However, in this stories not so simple.

First of all, this is clearly not an emotional action - Ovsyannikova was preparing for a live demarche for a long time and prudently. Later, they discovered her confession on camera, in which an employee of the TV channel apologizes for many years of propaganda from Channel One and the like. I tried my best to dress it up in the form of a suicide note. But already in the course of the video itself, the theatricality of what is happening becomes clear - Ovsyannikova does not have the courage to look the audience in the eyes, she reads the prepared text, not bothering to even partially learn it. Minus one point in the reliability of what is happening and one plus in the clear coordination of the event.

Then the most interesting begins. How many of you distribute video over the network, filming the event with a smartphone from a laptop screen? But Ovsyannikova's sympathizers, it turns out, practice this regularly. Here opens the second bottom of the operation to distribute the action live on the profile groups. A certain number of producers were waiting in advance for this very broadcast of the Vremya program with phones at the ready. By the way, shooting on the phone allows you to avoid blocking the video on the Internet.

The main goal of Ovsyannikova was to provoke a mass protest, not without reason, she mentioned the “innocent” Navalny in the video preceding the action. The provocative act of a fragile woman should be interpreted by the public as a call to go out into the street. If Ovsyannikova has already decided on this, then you do not stand aside. The message is quite clear and has occurred more than once in history. But there was another thought on the poster - the translation of the phrases into English “No war. Against war. Marina, in this case, does not address Russians, but foreign viewers, trying to assure the solvent public in the West that she is her own. The only thing missing is the phrase “Bring back the iPhone and McDonalds.”

Give away our comfort

To what extent did pacifist motives move Ovsyannikova? Why did she wait almost 20 days before she decided to take action? Because she doesn't really care about the lives of Russian soldiers, National Battists or civilians. First of all, Mrs. Ovsyannikova was covered by Western sanctions. When in her well-fed life (and the life of an employee of the federal TV channel is really not bad) vacations on the Cote d'Azur, Instagram, expensive foreign cars, restaurants and clothes were canceled, that's when Marina thought about innocent lives. For years, this and similar glamorous elite quite willingly ate at public expense, withdrew money offshore, bought real estate in Europe.

Actually, this is precisely the essence of all modern protest against the actions of the Russian army. Ukraine's sluggish war against its own people in the Donbas has not led to a deterioration in the quality of life of the cream of society for eight years - and, as a result, there have been no protests. Marina and others like her lazily brushed off photos of celebrities on social networks, drank prosecco and didn’t think about the mines falling on the heads of Donbas residents. About the war crimes of the National Battalions and the genocide of the Slavs. Because far away, European opinion leaders do not broadcast it, and because the deified West expresses only concern about events. No one has even heard of what the "Minsk process" is and where Kramatorsk is located. He did not impose sanctions and did not prohibit Marina from flying to fashionable resorts. Yes, and the first weeks of the military special operation did not cause much emotion for Ovsyannikova - the economic restrictions were not so acute and the quality of the successful Muscovite's own life did not have time to shake. 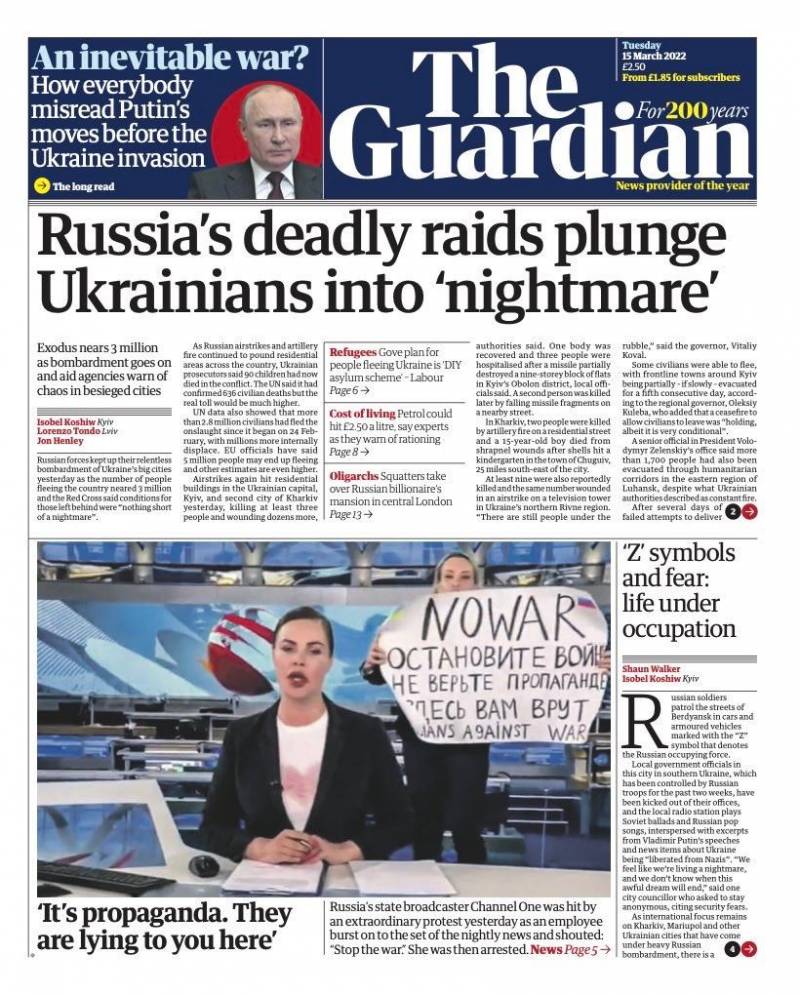 Foreign tabloids responded promptly. Were you waiting?
And so Marina decided on a bold demarche. I decided, of course, not on my own - well-wishers and beneficiaries helped. The figure of Ovsyannikova is the best fit for the role of a sacred victim, capable of driving hundreds of thousands of people out onto the streets. First of all, she is a young woman, by definition a very uncomfortable opponent of the Russian authorities. Secondly, Ms. Ovsyannikova works for the state TV channel. This, according to the producers of the action, should assure users that a split has finally taken shape in the Russian elite. Those who worship Navalny, Shenderovich and others have been waiting for him for many years ... It is worth a little more pressure, the authorities will make concessions and the much-desired iPhone and McDonalds will return to Russia.

You have to be careful - the action of an employee of Channel One can be repeated more than once in one or another editorial office. Too many interests of the elites of the West and Russia have been hurt lately. And such exalted ladies are very suitable for the role of sacred victims. Only here it is not necessary to make a reason for sacrifices from such actions. The reaction of Dmitry Peskov to Ovsyannikova's poster is indicative - he called the actions of an employee of Channel One an ordinary hooliganism. Marina turned out to be too impressionable and fell for pernicious propaganda. Such characters must be rapidly deheroized in the eyes of sympathizers. It remains only to find out where the true puppeteers of the situation are - inside the country or abroad.