The dragon is still watching: the prospects for China's involvement in the Ukrainian crisis 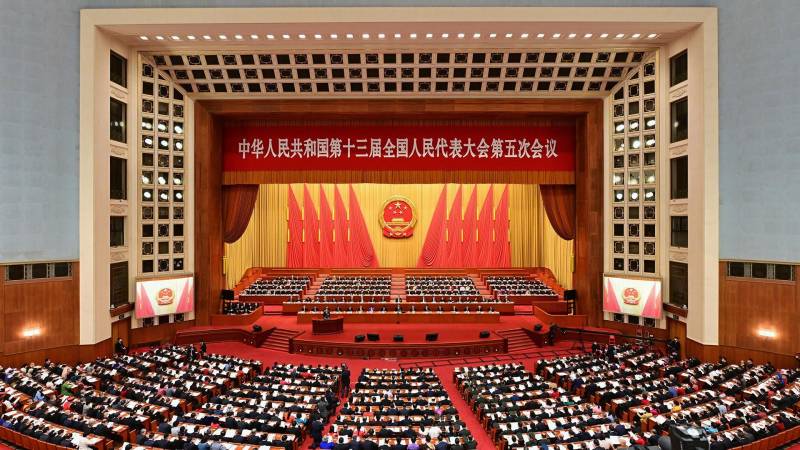 The dragon is watching

China is currently the main observer of the Ukrainian crisis, the consequences of which have already affected every inhabitant to one degree or another. Someone is fighting to the death for the freedom of Lugansk and Donetsk, someone is sadly watching record fuel prices, and someone is in a frenzy of hatred for Russia. Beijing has taken a distinctly pro-Russian position, has not joined the sanctions, and is assessing the prospects for a similar crisis to develop on its own soil.

In recent years, the United States has stepped up pressure on China, especially over the latter's claims to Taiwan, and the unfolding events around Russia could be a model for a future crisis. First of all, the ease with which Western countries froze (actually stole) half of Russia's foreign exchange reserves is striking. Who is stopping Washington from confiscating China's money in the same way?

Moreover, Beijing has accumulated a gigantic amount - more than 3 trillion dollars, to which the United States has virtually direct access. And nothing can be done about it - until they come up with more reliable currencies for saving capital than the dollar and the euro. The yuan never became a global monetary unit, so it will not be possible to reliably save savings in this financial haven either. The problem is with gold, which is physically not enough to provide such gigantic reserves. The United States, along with European countries, theoretically retains leverage over established Chinese neutrality. And the most desperate in Washington are already threatening China. So far, however, it has not come to Beijing's sovereign savings. As the New York Times writes:

Commerce Secretary Gina Raimondo has issued a stern warning to Chinese companies that may flout announced US restrictions on exports to Russia, saying the US will cut them off from the US hardware and software they need to manufacture their products.

The American was even frightened by the shutdown of the SMIC semiconductor factory in Shanghai - no one overseas, apparently, thought about the global consequences of such a step ... Officials of a much higher rank are also putting pressure on Xi Jinping. According to Victoria Nuland, Olaf Scholz and Emmanuel Macron have already spoken with the Chinese leadership. There is only one goal - to try to persuade Beijing into an anti-Russian coalition. In response, Zhao Lijian, a spokesman for the Chinese Foreign Ministry, quite unequivocally parried the US claims:

“China strongly opposes any unilateral US sanctions and their application of the principle of extraterritoriality. When considering the issue of Ukraine and relations with Russia, the American side must strictly and accurately take into account the concerns of China and not allow infringement of the rights and interests of the Chinese side.”

And here the Americans really have little chance of success. With the rejection of Russian oil, everything is going relatively calmly - after all, no more than 10% of supplies were withdrawn from the total volume of imports. But to finally quarrel with one of the most important trading partners for the current US administration would be like death.

The economic inconvenience of the population, expressed in a rise in the price of everything and everything, will already lead to political demands. Gasoline at American gas stations has overcome the psychological mark of $ 4 per gallon, and the prospects for a decline are not yet in sight. A distinctive feature of the current crisis is the intransigence not only of China, but also of the "world gas stations" - Venezuela, the United Arab Emirates and Saudi Arabia.

Washington tried in vain to persuade the oil-producing countries to increase production in order to offset the loss of Russian exports. Maduro, for obvious reasons, sent the Americans away - we remember the attempts to change power in the country and the clearly disadvantageous position of the United States in this stories. The Saudis and the UAE have refused to discuss the issue of oil at all. First of all, no one wants to lose profits and destroy the unity of the OPEC + cartel. Secondly, the Arabs are unambiguously taking revenge for flirting with Iran, to which the Americans have already been promised prompt access to the oil market for a nuclear deal.

China is certainly receiving serious dividends from its policy of non-intervention in the Russian-Ukrainian crisis. Firstly, the United States is now 100% busy organizing pressure on Russia, which means diverting attention from the Asia-Pacific region. However, an unofficial delegation arrived from Washington to calm down Taiwan, which has already irritated the Chinese Foreign Ministry. Secondly, Western sanctions pressure on Russia will inevitably turn the Kremlin to the east.

Now pessimists and spiteful critics are talking about the insignificance of trade relations between Russia and China. Say, we are not even in the top 10 of Chinese trade. But let's take a closer look at the situation. Does China have many allies with such a huge resource and military-technical potential? At hand is the "giant US aircraft carrier" Japan, which is trying by all means to put together a military alliance against China with India, Australia and the Americans.

The European Union is also trying to rid itself of growing Chinese influence. If now it’s just to close all European automobile enterprises in the Middle Kingdom, then half of the brands will simply go around the world - such an influence is exerted by the constantly growing Chinese market. That is why Beijing will never go for unilateral sanctions against Russia.

By the way, since 1989 the Chinese themselves have been permanently under Western restrictions, in this, one can say, we are comrades in misfortune with the PRC. Companies subject to US restrictions (for example, Huawei and ZTE) will soon take their place in the Russian market. And it is not at all necessary that the quality of these goods will become noticeably worse than the departed European and American ones. China has already become interested in buying significantly depreciated shares of Russian companies - primarily Gazprom and Rusal.

For Russia, the turn to the east will have strategic implications. First of all, in the development of infrastructure in Siberia and the Far East, which has been talked about for several decades. These territories are gradually losing population, and hence the potential for development. For full-fledged trade with China, completely different transport communications are needed.

But it is impossible not to remember in this story about a fly in the ointment.

China is primarily an importer of resources and food. The developing crisis around Ukraine hits buyers very painfully. The high cost of oil, gas and wheat in the near future may provoke a recession, both in China itself and among its trading partners. However, the United States has already missed one of the points of the program.

Washington, in fear of the well-being of its own electorate, hurried to bow to Venezuela and the United Arab Emirates with a request to increase oil production. While it worked. But the US has lost an important lever of pressure on China's political leadership - the rise in oil prices could force Beijing to reconsider its neutrality towards Russia. However, the Kremlin also has its own trump card - the dumping of oil exported to China. Russia currently supplies at least a third of export oil flows to the Celestial Empire and may well stimulate the economy of its neighbor with discounts. With gas, everything is more complicated - in the near future, Russia will not be able to purely technically increase sales of pipeline gas to China.

Now we supply China with about 7 billion cubic meters of gas per year, while Turkmenistan sells more than 40 billion to Beijing. At the same time, China is ready to buy much more pipeline gas, but the capabilities of the Russian gas transmission system are still limited. We have to be content with LNG, which is much more expensive.

That is why Beijing is closely following the results of Russia's special operation in Ukraine, expecting the speedy demilitarization and denazification of the Kiev authorities. And here, in addition to geopolitical interests, an important role is played by the economic component.