Uzbekistan: Karimov swore to the West. West begins to shake the Karimov regime 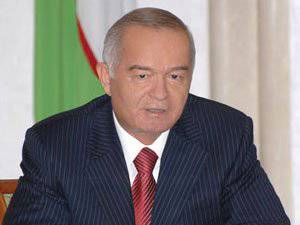 ...First many it will be a little boring, because about a rather distant country.

The raider games in Uzbekistan - in particular, the expropriation of the Russian mobile operator MTS, which occurred in the summer, and recently ended with sentences - did not attract much attention. The fact that there is corruption in the post-Soviet republics, and the more southward, the more frank, it is not a secret that it is interesting for narrow specialists to delve into this issue. Probably, a very similar problem that had arisen recently with another mobile operator, this time the Swedish TeliaSonera, would probably not be too intrigued, but this time the scandal is accompanied by special effects that make it possible to talk about a weighty political component. complicated.

Certainly, the reputation of the Ferghana News site (the initiator of the release of information on the Runet) is so handshaking that you can only trust it by measuring not seven, but seven times seven. For the simple reason that in this case, this sample of creativity just retells the content of the film released on the Swedish TV screens, and - this is especially important - already shown in Spain, the United Kingdom and other countries. And since the Swedish-Uzbek graters are deeply uninteresting to the local hamster, the conclusion is inevitable: the precious prime time was bought not for the sake of the hamsters' fun, but in order to give a hint to someone in Tashkent: the story goes to a very high level.

Obviously, the anger of the authorities and, accordingly, the problems of “TeliaSonera” (and at the same time another Swedish company, “Ucell”) are connected with the film. And in this case, if something is not clear, it is why the Swedes suddenly decided to run into old partners, with whom they had cooperated for a long time and quite fruitfully. Although, on the other hand, there is no ambiguity. It all started not in Sweden, but in Switzerland. There, in lovely Geneva, on July 30, criminal proceedings were instituted (on suspicion of money laundering) against four citizens of Uzbekistan, and two of them (some Shohrukh Sobirov and Alisher Ergashev, managers of Coca-Cola Uzbekistan) were taken under the guard. Then, apparently, began to testify.

And here the wheel spun seriously. At first, the press utterly vaguely flashed hints of "not entirely explicable involvement" in all sorts of bad cases of "high-ranking persons from Uzbekistan." Then much harder materials began to appear, right down to that very film, multiseries and filmed incredibly quickly. Complicated graphics of “informal favors” built on the basis of kinship-friendship-enmity, which in itself — if it comes to the surface — are considered to be unacceptable in Europe.

And most importantly, in connection with various kinds of scams (business withdrawals, offshore money purging, extortion and tede), 320 sum of green lemons was mentioned, allegedly transferred through the Gibraltar offshore Gulnara Karimova, daughter of the President of Uzbekistan. According to investigators, they are almost the main raider of their country, and according to political scientists, the “strong lady” of Tashkent, who seriously intends to inherit the father’s throne. And as soon as this name sounded publicly, the economy faded into the background, giving way to pure politics.

Judge for yourself. Three years ago, far back in 2009, the purchase of “Coscom” (for 260 million euros) - just through the very Gibraltar off-shore - the Swedish press was very smartly discussing. Given the nuances, and the scandal was considerable, and requests in the Riksdag, but in the end the noise in a strange way died out. Even the opposition has forgotten the topic. Which is actually unusual for Scandinavia. Most likely (there are simply no other options) because TeliaSonera is not an ordinary joint-stock company, but a joint-stock company, the majority of which is owned by the Kingdom of Sweden.

That is, the Vikings cunning. They all knew, and acted in their right mind and solid memory, knowing full well what was acquired from whom and under what conditions. And the main shareholder knew, and the management knew, and the prosecutors, and the parliamentarians knew everything perfectly and in details. But they were silent. Because gingerbread, because it is sweet, and because besides them, no one knew. But now, when Switzerland, damn it, unleashed a scandal around the MTS and money laundering, the Swedes were startled. Not because of some injured foreign (especially Russian) mobile operator, but for the reason that it smelled fried for them too. Geneva investigators are famous for their tenacity, and the prestige of the Kingdom, both political and business, is at stake. So the gears started spinning, so the eyes turned round, as if the prosecutors had heard about everything for the first time, and so the press had found the principles.

But there is a mention of gingerbread and special flavor. From the compromising film, it obviously follows that the solid, although by European standards, and slightly “incorrect” business, the telecommunications operators allowed, by establishing good relations with respected business partners, to buy, in addition to radio frequencies, something more abruptly. For example, a batch or two of enriched uranium. Without the necessary notifications, where it should be, but with complete mutual interest. According to this scheme, it turns out that Vattenfall, the largest energy company in Sweden, worked in Uzbekistan. Also joint-stock and also mainly owned by the Kingdom.

And although something (about uranium!) Even leaked out to the press, neither the deal itself, nor business partners from far-off Asia attracted much attention at that time. The press reported the fact, but no one smelled sensations, no one suspected anything, didn’t catch it, and everything died down. And now this thing, seemingly well-forgotten, pops up with the appendage to the Teliasonera case, and the newspapers are gradually beginning to touch on the problems of “black cash”, pushing that the figures in the scandal today are the same as yesterday. Moreover, implicitly, fully thoughtfully, the idea is being thrown in that the raid on the MTS was organized by Gulnara Karimova along with the head of the strongest of the special services - putting her father in front of a fait accompli. That is, the West is shaping the view that Karimov personally has almost no control over the situation.

And here it becomes interestingbecause it is pure international policy for Russia.

If you remember, some time ago we were already talking about the decision of Islam Karimov to sharply turn the steering wheel, leaving the Russian roof under the wing of the United States in exchange for protecting him personally, and if the House with the Hill is deigned, then its clan. A certain logic in this decision was: The states are now strong, very interested in Uzbekistan (in many ways, the key country of Central Asia) and, importantly, gave convincing guarantees. In short, extremely gently laid. However, now that President Karimov has taken a decisive step, effectively dissociating himself from the Kremlin, there is no longer any need for softness. So, then the game goes on the principle of "nothing personal." Karimov did his job by kicking Russia, and now Karimov is better off.

Because the West (read: the United States) in the emerging geo-strategic solitaire emerging before our eyes really needs Central Asia - first of all, Uzbekistan and Kazakhstan - but neither the presidential patriarchs nor their potential successors, rooted in local soil. In Tashkent and Astana, Americans need, let's say, “Saakashvili 2.0” - absolutely obedient, predictable leaders, surrounded not by the traditional power elite, but by “like-minded people” chosen for them across the ocean. It is only under this condition that the West has the opportunity, with full confidence in the reliability of logistical support, to engage in big fish like China and Russia.

Hence the Swiss investigators. Bern, although “a thing in itself,” but, - and this is not a secret, - very rarely refuses to help Washington. Hence the flow of compromising, yesterday did not bother anyone, but carefully accumulated for the future. Hence, the severity of interrogations, at which arrested people begin to smartly merge accounts-passwords-attendances of their “bosses” - that is, those potential heirs who, though (which is already there), are hated by many fellow citizens, but have a real chance to lead the elites and their support groups, if alternatively they are gauleiters who are ready to break the traditional balance of power schemes.

And Mrs. Karimova, of course, has such a chance. She is loved by her father, who, although omnipotent, but by many indirect signs, simply because of her age is less in control of the situation, she skillfully forms (has already formed) her "clip", where (very importantly) there is a place for representatives of all traditional clans, and she herself is strong-willed, tough, tenacious, able to stand up for herself, for her interests and, by the way, for the interests of a country that she regards as her own, which can not be transferred to anyone else's property in the least.

Here is such a political and economic performance with exotic dances. Rather, the overture with intermission. But the curtain is gradually moving, the first act is about to start, and the whole trick is that even the actors are not given out the roles in advance. What is the finish planned, they know only the author, director and, possibly, a group of prompters. And we, the spectators, - even in the stalls, at least in the gallery - we just have to watch.

In general, everything is more or less clear.
It is not clear what the Kremlin is thinking about all this ...