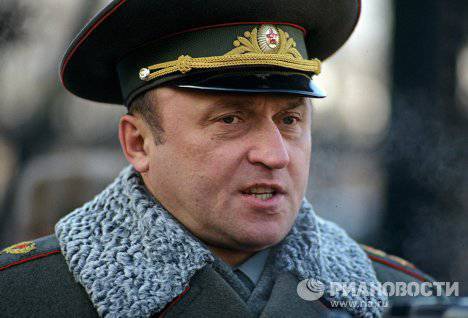 In the Moscow hospital named after Vishnevsky, the former head of the Ministry of Defense Pavel Grachev died. The cause of death in the medical institution did not specify, saying only that Grachev died today at 14: 40 MSK, reports RIA "News".


The details of Grachev's hospitalization have not yet been disclosed. It is known that he got 12 September in the intensive care hospital named. Vishnevsky. “Pavel Sergeevich is in intensive care. His condition is stable. There are no grounds for panic,” said a representative of the Omsk radio plant, where the former minister worked as an adviser to the general director.

The media therefore began to speculate that doctors hide the real reason for Grachev’s hospitalization. The hospital even refused to tell reporters where exactly the ex-minister was located, although they confirmed that he was treating him specifically. According to rumors, Grachev poisoned mushrooms at a friend's party: he returned home, suddenly felt bad and lost consciousness. The family was called for him, and the doctors took the general to the hospital.

Grachev left in the newest Russian stories ambiguous trace. Pavel Sergeevich was born on January 1 1948 in the Tula region in the family of a locksmith and milkmaid. After military service in the army, he entered the prestigious Ryazan Higher Airborne Command School and graduated from it in 1969 year. In 1981, Grachev was sent to Afghanistan, where he rose to the post of commander of the 103 Guards Airborne Division. In 1988, Mr. Grachev was awarded the title Hero of the Soviet Union.

Grachev was obliged to continue his brilliant career in the time of the new Russia due to the right choice, which he made in August 1991. As the commander of the Airborne Forces of the USSR, he first obeyed the order of the Minister of Defense Yazov to send troops to Moscow, but then went over to the side of Boris Yeltsin. In 1992, Mr. Grachev became Minister of Defense for the Russian Federation, and during the events of October, 1993 supported the president again.

The post of defense minister Grachev lost due to the beginning of the war in Chechnya. Responsibility for the failure of the Russian military at the beginning of the campaign was assigned to him. In addition, Grachev was accused of corruption and in the rejection of reforms in the army. In 1996, Grachev was dismissed and replaced by Igor Rodionov, by the way, the former commander of Grachev.

“In my 40 Army, Grachev was a good commander of the Airborne Division. He never rose above this level. He became the minister only because he ran to Yeltsin’s side in time,” Rodionov, who didn’t work well with Yeltsin, described him and was quickly fired.

Hero of Russia, Colonel General Gennady Troshev also spoke about Grachev not from the best side. According to him, he expected more from the experienced "Afghan" during the first Chechen campaign. At the same time, Troshev found a positive side in the activities of the ex-minister: according to him, Grachev "did not allow the army to be destroyed under the guise of military reform, as the young reformers demanded."

After his resignation, Grachev worked for a long time in the Rosvooruzhenie (Rosoboronexport) company. In 2007, he was discharged to the reserve and during the last years of his life he served as the head of a group of advisers to the general director of the Omsk Production Association "Radio Plant named after AS Popov".

Ctrl Enter
Noticed a mistake Highlight text and press. Ctrl + Enter
We are
The situation in the south-east of Ukraine. Chronicle of events. 3 May
261 comment
Information
Dear reader, to leave comments on the publication, you must to register.