Optimization of Russian Medicine and Excessive Mortality of the Population 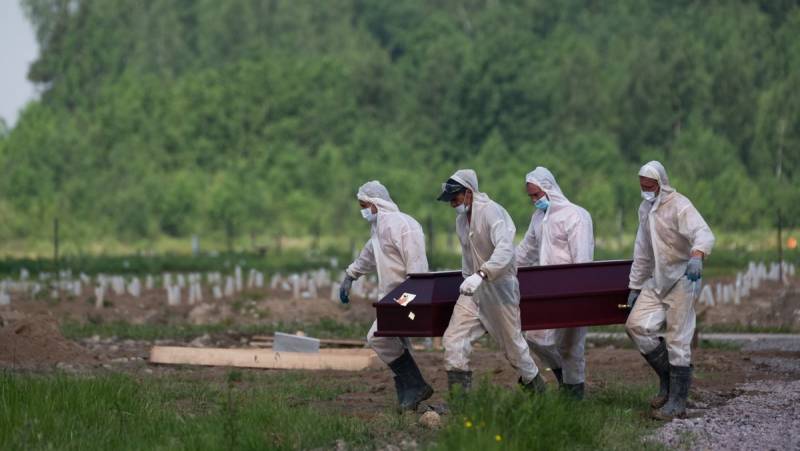 First, some statistics, which are extremely pessimistic.

In 2021, our country lost 2,45 million people, which is a record for the entire post-Soviet period. If we take 2019 as a starting point, then Russia lost 658 thousand people in excess last year - this is the population of a large city. By the way, in 2020, 335 people died “in excess of the norm” in the country. The growth over the past year has been two-fold!

Naturally, among the most important reasons for this situation is the high mortality from COVID-19, which has reached almost 610 thousand people. These are statistics from April 2020 to December 2021, recording deaths directly from the coronavirus. If, for example, a person was discharged from the hospital, and he later died from the consequences of COVID-19, then he is not considered a victim of the pandemic.

But enough to bore readers with digital arrays, let's turn to professionals to comment on the situation.

Here, for example, the director of the Institute of Demography. A. G. Vishnevsky Mikhail Denisenko blames state control for the situation. In an interview with Expert (No. 6, 2022), he says:

“In such a situation, restrictive measures and control over their observance by the state, including regional authorities, it seems to me, should have been stricter, up to the introduction of a lockdown. The reduction in medical care for people with various chronic diseases also had a negative impact on the dynamics of mortality. Many of the dead were among those who had been ill with covid and were considered recovered.

It seems that there is logic in Denisenko's words, but let's take a look at the Hopkins University study, the results of which simply turn everything upside down.

At the end of January, this authoritative source published data according to which the worldwide lockdowns in the spring of 2020 turned out to be ... meaningless. Restrictive measures on a planetary scale were able to reduce mortality from COVID-19 by only 0,2%. At the same time, lockdowns have led to powerful economic and social consequences that we still cannot cope with.

The most effective, according to scientists from Hopkins University, was the self-isolation of the sick, which reduced mortality by 2,9%. The publication "Kommersant" sums up news quote from the report:

“A meta-analysis concluded that lockdowns had minimal, if not zero, impact on public health, but where they were introduced, they incurred huge economic and social costs.”

Scientists see special cynicism and stupidity in the mandatory wearing of masks on the streets and the ban on visiting beaches and parks. And here a paradox is born - in Russia, rather loyal restrictive measures were not observed everywhere, but all the same, the past years were marked by extreme mortality.

What is the reason?

The Russian health care, amazed by many years of optimization, has finally repaid us a hundredfold. The Institute for National Economic Forecasting (INP) of the Russian Academy of Sciences published an extremely pessimistic article "Modern problems of Russian health care", consisting of two parts, in the publication "Problems of Forecasting". Let's try to highlight the abstracts from this multi-page work, the authors of which are recognized experts in the field of economics.

According to this parameter, even in the best year 2019, Russia was not included in the hundred of advanced countries of the world, not to mention the developed countries. According to the most conservative estimates, the average life expectancy of an average Russian corresponds to a similar parameter of a European and an American in the 60s of the last century. Researchers from the INP see the main reason for this situation in the chronic underfunding of Russian medicine.

There is such a pattern - the more a country spends relative to its GDP on the health of the nation, the longer citizens live. This became especially acute in connection with the so-called second epidemiological revolution. In developed countries, it started in the 60-70s of the last century and consisted in reducing mortality from cardiovascular and oncological diseases in middle and older age. That is, people from these causes continue, of course, to die, but already at the age of mainly over 60-70 years.

So far, only the first epidemiological revolution has taken place in Russia, which has reduced the mortality of children and young people from infectious diseases. The second revolution did not happen due to the lack of money allocated for healthcare and the total optimization of the industry.

As the researchers note,

“The implementation of the strategy of the second epidemiological revolution requires the development and implementation of new medical technologies, diagnostic and medical equipment, an increase in the number of people employed in healthcare, and the development of pharmaceutical production. All this leads to a significant increase in the cost of medical care and, accordingly, to a significant increase in healthcare costs.
In developed countries, since the 60s, the share of spending on medicine from GDP has doubled within 30 years, while average life expectancy has grown by five to seven years. In the Soviet Union, during this period, the share of GDP remained unchanged, which resulted in a halt in the growth of the average life expectancy of a citizen.

Recovery growth in healthcare spending took place only by 2018, when Russia spent 3,2% of GDP on national health. The relative generosity of the state made it possible by 2010 to record an excess of the notorious average life expectancy of a Russian at more than 70 years. For the first time in stories, need to mark.

But Russia has fundamentally lagged behind the developed countries that have gone through the second epidemiological revolution. For example, Germany spends about 8,7% of its GDP on healthcare, and the average life expectancy in the country already exceeds 81 years. Of course, COVID-19 will make its own adjustments, but not fundamentally.

When the COVID-19 epidemic broke out, it turned out that in Russia, in the course of optimizing

“The network of infectious diseases hospitals was curtailed, and the number of beds for infectious patients was reduced by more than 80 thousand.”
Naturally, we had to urgently re-profile ordinary hospitals, which, according to their intended purpose, should be engaged in planned work. But they, too, were at one time reduced.

According to the authors of the study, the number of medical organizations for the period 1990-2018 decreased by more than two times, hospital beds - almost twice, ambulance stations, as well as feldsher-obstetric stations - by a quarter, outpatient organizations - by 6%.

It got to the point that federal medical research centers had to be transferred to covid hospitals, thus effectively blocking assistance to patients with the most complex pathology.

Years of optimization forced the involvement of doctors who do not specialize in infectious diseases in the treatment of COVID-19. This, firstly, reduced the effectiveness of treatment, and, secondly, diverted attention from patients with cardiovascular and oncological diseases.

The shortage of doctors is now so great that medical students are attracted to work with patients, who, by definition, cannot provide professional assistance.

As a result, an acute shortage of medical workers has developed in the labor market - in 2021, the number of vacancies increased by 1,7 times. However, the number of specialists willing to work in hospitals either did not increase or even decreased.

This will inevitably lead to an uneven distribution of medical workers - an outflow from the periphery to a well-fed center, where they simply pay more. The shortage of doctors in the regions will be felt even more acutely.

Probably, the attentive reader will ask, has the salary of doctors seriously increased due to the pandemic? Are they complaining now?

According to analytical agencies, from October 2019 to October 2021, the growth was only 15,6%. At the same time, throughout the Russian economy, according to Rosstat, wages increased by 17,4%.

Okay, teachers, who “raised in price” by 14,4% in two years, but how did the government allow such a meager increase in doctors' salaries? Compare this to a 25 percent increase in incomes for finance workers and insurers over the same period.

Obviously, we will see real attention to health problems only when there are no doctors left in Russia at all.