The Mystery of the Bayeux Tapestry. And the fight broke out! 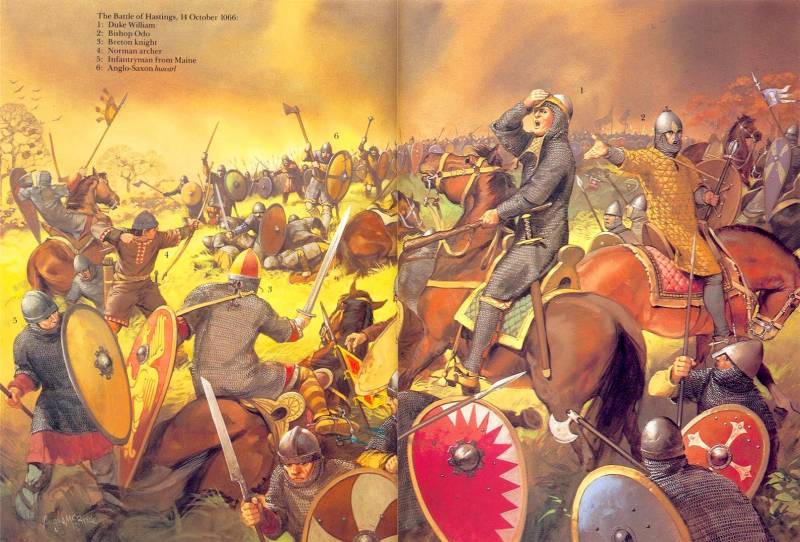 «Here he is, William!» The decisive moment of the Battle of Hastings. Rice. Angus McBride

Ravens gather more:
"Where are you flying from?" - "I'm drunk with blood,
I am flying from the Hastings field!
The Saxons didn’t have a king yesterday,
Lying between his he killed
The Norman feasts, dividing his land,
And we feasted there full.
Victory from York was the Saxon army,
Now they are quiet and quiet
And their corpse Harald can not be found
Mnihi wandering among the corpses ...
"Three Battles" Alexei Tolstoy
Rarities stories. Today we return to the theme of the legendary "Bayeux tapestry" and continue our story about the events depicted on it. We settled on the fact that the battle of the British and the Normans was about to begin. Today our story will be devoted to the course of this battle, and then we will talk about its consequences. 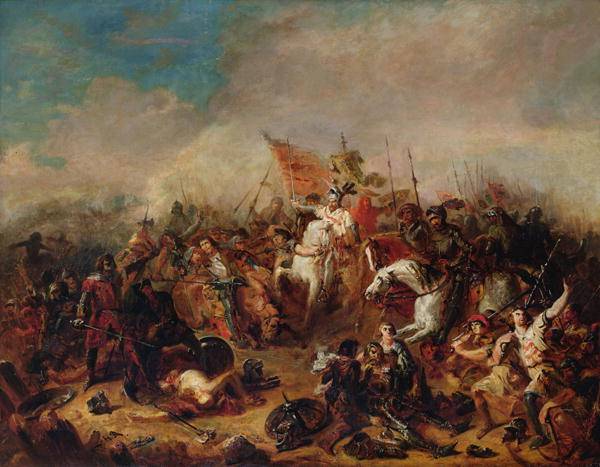 François Debon (1807–1872). Battle of Hastings 1066 (1845) Caen, Musée des Beau-Arts, France
So, let's start with the fact that many British historians believe that, although, judging by the results of recent research, only two people embroidered the tapestry, and these were most likely men, to find out exactly from it what really happened in the Battle of Hastings, impossible. Rather, there is a rather big difference between what is embroidered on the tapestry and the actual course of the battle.

Duke Wilhelm admonishes his warriors, and the battle begins... Scene 51
For example, it clearly shows that only one cavalry and a certain number of foot archers are active in the battle from Wilhelm's side. However, other sources that have come down to us tell us that large infantry forces operated in it. Moreover, the Norman horsemen at the very beginning of the battle stood in the rear, and only at the end moved forward. Although, if you look at the tapestry, we will not see it there. By the way, there are a lot of archers on the Bayesque tapestry: 29 figures. But 23 of them are on the border, and not on the main field, which clearly indicates their secondary role in the battle, and this despite the fact that many Saxon horsemen and foot soldiers on the main field are downright studded with arrows. Four Normans are depicted on the tapestry wearing protective weapons and with bows in their hands, but one single Saxon archer is dressed in ordinary clothes. There is only one horse archer, without protective weapons, and is depicted among the Norman knights pursuing the Saxons. And since all the details of the weapons are shown on the embroidery in great detail and with skill, this gives grounds for the conclusion that such an image clearly had some very specific purpose. But what? To rewrite history, how is it now fashionable to talk about it here in Russia? But what is the meaning of this rewriting? It was the Normans who won, not the Saxons. And this is known from many handwritten documents, and not just from one tapestry.

Scene 52a. Nothing is written here - and it's so clear that a fierce battle is going on

Scene 52b. And here is an explanatory inscription:Here fell Leofwyn and Girth, King Harold's brothers.»
Be that as it may, but in the school history textbook (and, by the way, not only in the school, but also in the university!) It is written that the main role in this battle belonged to the Conqueror's cavalry. That she several times attacked the British, who were hiding on a hill behind "shield wall”, and then, with a feigned retreat, lured them to the plain, where she surrounded and destroyed. That is, the English on foot rushed to pursue the fleeing horsemen (?) and, of course, completely upset their orders, and it was then that the Norman cavalry attacked and destroyed them.

Scene 53Here the British and French fall at the same time in battle»
Somehow it all looks ridiculous. But Harold, who led the British, was not a novice in military affairs. He had just won a decisive victory over the Norwegians. Quickly transferred his forces from the battlefield at Stamford Bridge to Hastings and for some reason, like a child, fell for such a simple trick as a false retreat. It is also unclear why his army on the tapestry consists exclusively of infantry, although the shields of his warriors do not differ from the horsemen's shields of the Norman warriors! It is not clear how Harold died.

Scene 54. It depicts Bishop Odo with a club in his hands. The inscription, however, reads:Here Bishop Odo, holding a staff, encourages the youths". Bakulum is exactly the staff, that is, the sign of his military command! 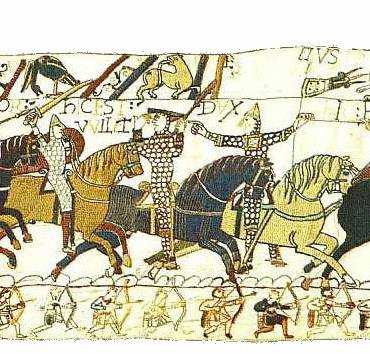 Scene 55Here is William!» It is interesting that Count Eustachius has a banner in his hands. It may be the same one sent by the Pope to show his support for Duke William's invasion of England.

Scene 56. A desperate fight between mounted and foot soldiers. There are many archers on the border. The explanatory inscription reads:Here the French fight and kill those who were with Harold". Interestingly, the word “Franci” is sometimes used to refer to the Normans in the inscriptions on the tapestry, although the Normans at that time did not consider themselves French, even though they already spoke French.
It is believed that he was first shot in the eye with an arrow and then hacked to death by the swords of the Conqueror's riders. Perhaps the secret of the tapestry lies precisely in the fact that at Hastings on the day of the battle it was not Duke William's horsemen who won, but the infantry and archers of Count Eustace (Eustace) of Boulogne, who literally bombarded the British with their well-aimed arrows. And only at the very end of the battle, the knightly cavalry of Duke William went on the attack on the British, and even then they acted unsuccessfully. After all, the horsemen, in order to get to the "wall of shields", had to overcome a steep climb up the hill. The hill itself is very narrow, similar to a curved ax blade, and there is simply nowhere else to fit on it except for the infantry that occupied it. 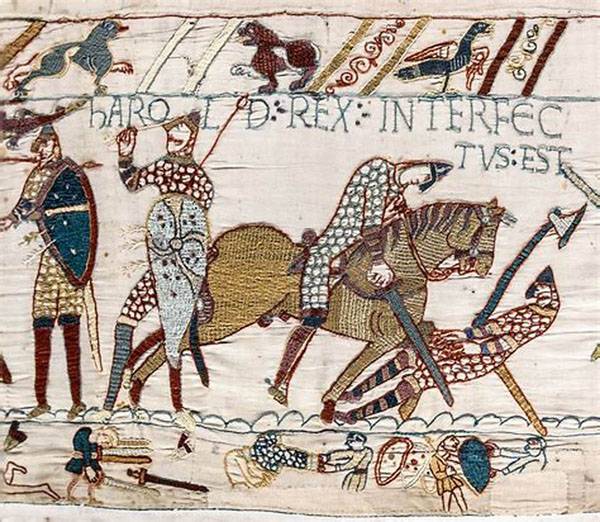 The 57th and one of the most celebrated and famous scenes of the tapestry: the death of King Harold. But it turns out that Harold is depicted here twice (the tapestry in this place is quite difficult to interpret). First, it is shown that Harold retrieves the arrow that struck him in the eye, and then he is already falling, chopping with a Norman knight's sword. The explanatory inscription explains little, except for the very fact of the death of the king: “Here King Harold is slain»
But the fact is that the Norman knights who reached the top of the hill could not gallop quickly, and would be completely helpless. One might think that this was exactly what happened, and that it was then that they were retaliated by Harold's Huskerl warriors. It was then that the rumor spread that Duke Wilhelm had been murdered. After that, panic began, and then it was Count Eustachius who organized an attack on the British from the flank, rode ahead of his people with a banner in his hands and shouted: “There he is, William!And just at that moment Wilhelm threw his helmet back on the back of his head. The warriors immediately recognized him and again rushed into battle. That's just to send the cavalry up the mountain to the wall of shields ... Well, Wilhelm could not do that. No person in their right mind would do that.

The last surviving piece of tapestry is episode 58: Harold's warriors flee, and the Normans pursue them. The caption reads: "and the British take flight»
As for Harold's warriors, his warriors were exactly the same horsemen as Wilhelm's warriors, except perhaps for those very famous huskerls, but there were not many of them at all. Perhaps Harold did not trust his warriors and therefore, fearing betrayal, ordered them to fight on foot, and the horses were in the nearby forest behind the hill. Because it was on horseback that they fled after the defeat, which the 58th episode of the tapestry shows us. 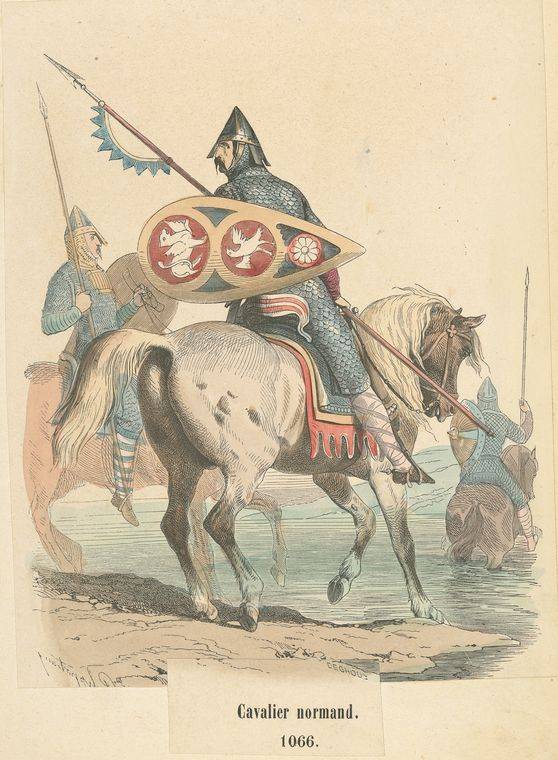 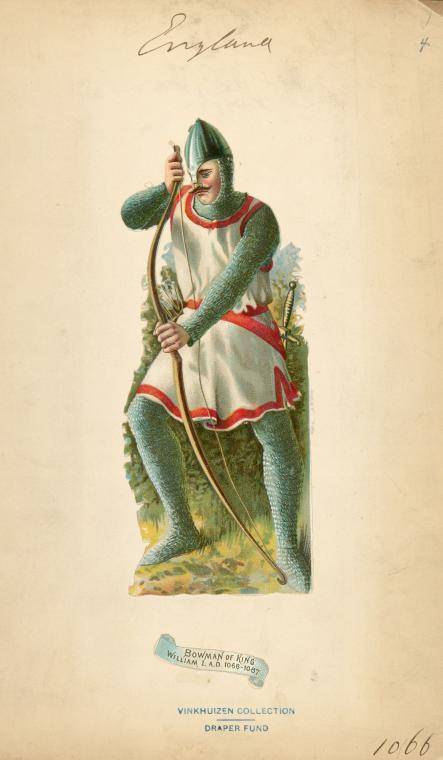 Norman archer 1066. Illustration from H. J. Winkhuizen's collection of images of military dress (1843–1910). New York Public Library
Then the characters from Aesop's fables on his border did not appear by chance. They clearly say:Here everything is the same as in Aesop, has a double meaning. Remember this!But, unfortunately, we can only guess if this is so in reality. 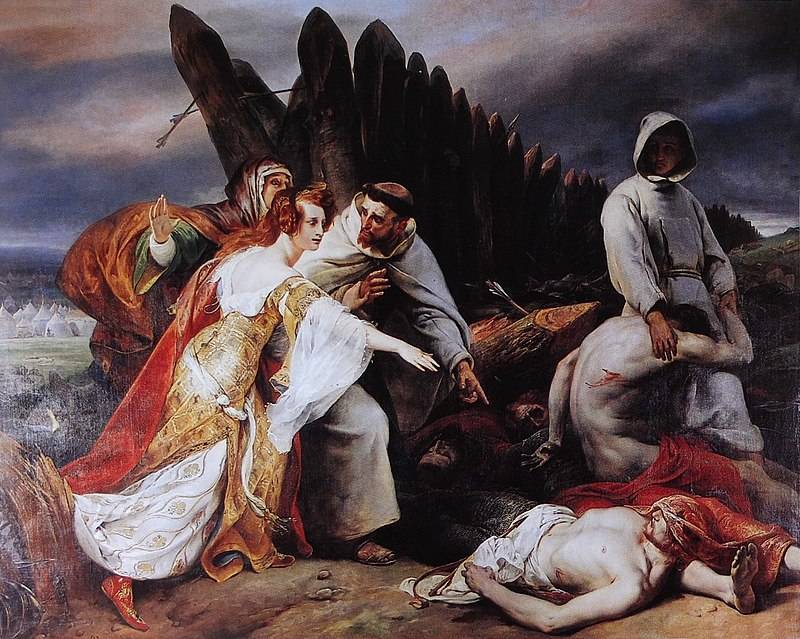 Horace Vernet (1789–1863). "Queen Edith Finds the Body of Harold" 1827 Thomas-Henry Museum, Cherbourg
And this is how the battle of Hastings could have happened - a modern reconstruction. 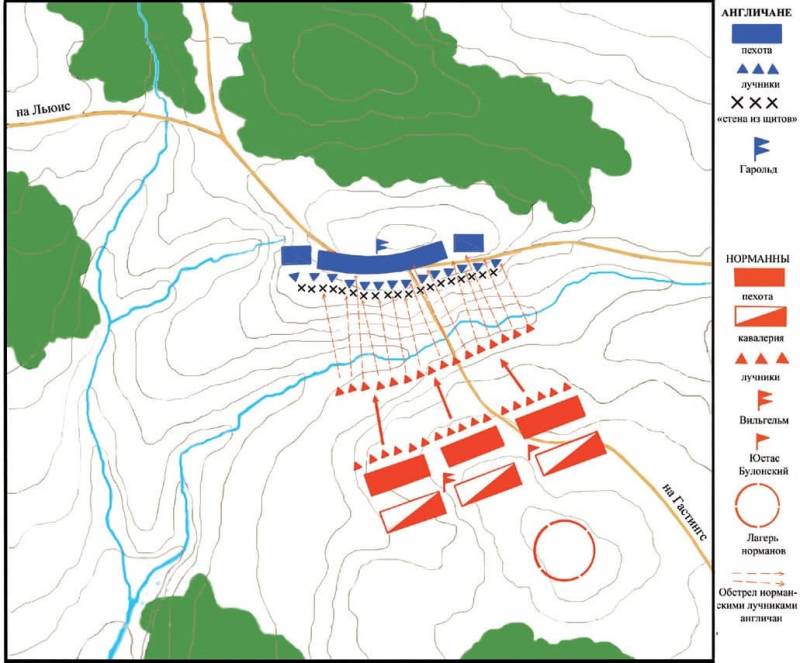 First phase: Harold's warriors stand at the very top of the hill, lined up in a long winding line, and cover themselves with "snake-like" shields. Their opponents the Normans move up in three lines. The archers go first, followed by the infantry, and behind all the detachments of the knightly cavalry. And there are few riders. The left flank is commanded by Duke Wilhelm himself, the right flank by Count Eustachius of Boulogne 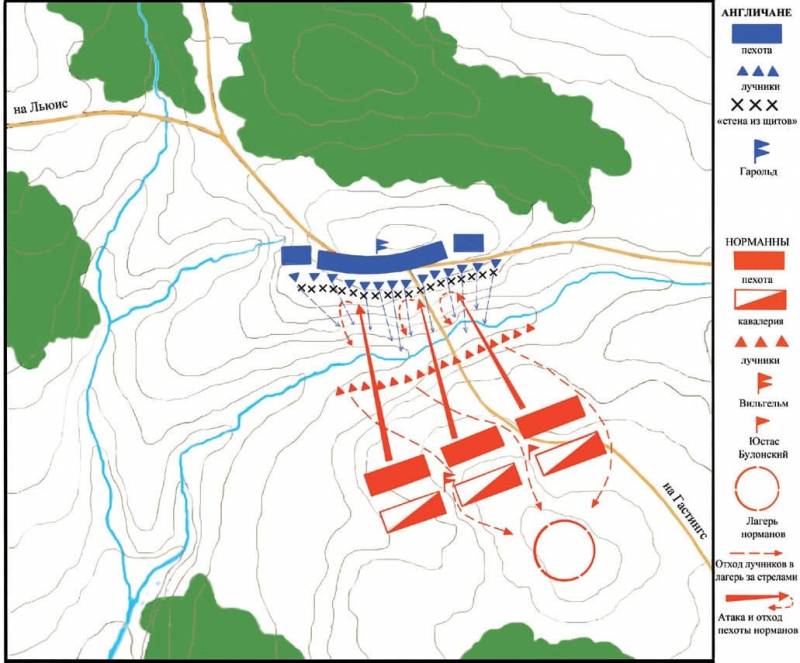 Second phase: The Norman archers have shot all their arrows and retreated to the camp to resupply them. The Norman infantry is attacking the "wall of shields", but it is successfully reflected 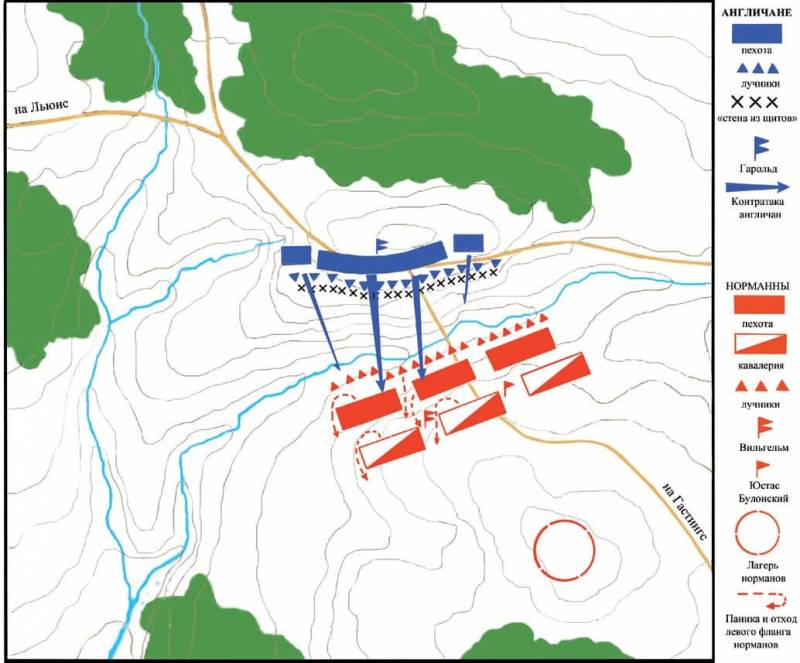 Third phase: archers reappear on the battlefield and bring down a hail of arrows on the British. King Harold is shot in the eye with an arrow. Here Harold's warriors do not withstand the shelling from the bows and rush to the archers down the hillside. There was no planned retreat, people were simply tired of standing and dying. Wilhelm's warriors, including the horsemen, are taken by surprise by this attack. There is panic. A rumor is spreading among the warriors that the duke has been killed. 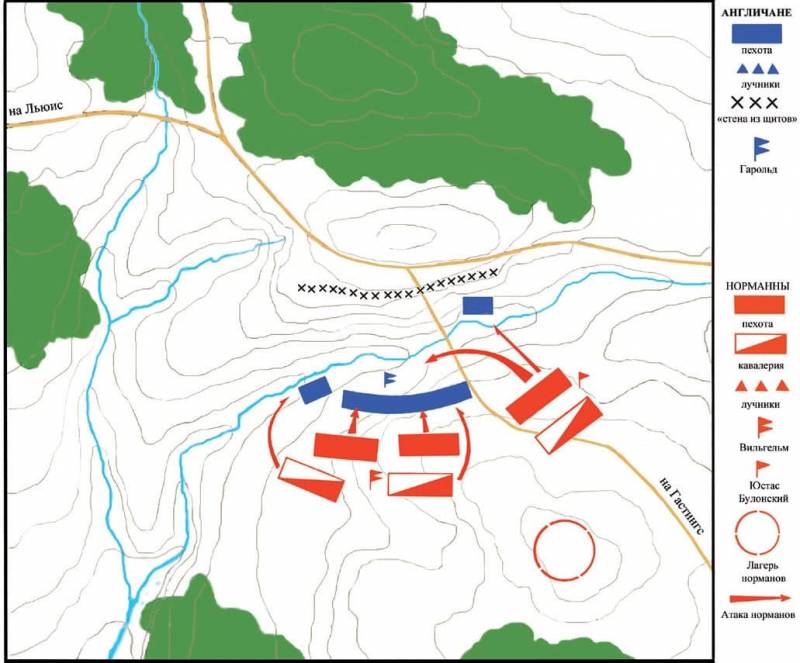 Fourth phase: Count Eustace of Boulogne, at the head of his cavalry, goes to the aid of William. A timely attack by the Count of Boulogne's cavalry on the flank and rear of the advancing British leads to a turning point in the battle. The Saxons stranded on the plain are surrounded and destroyed. 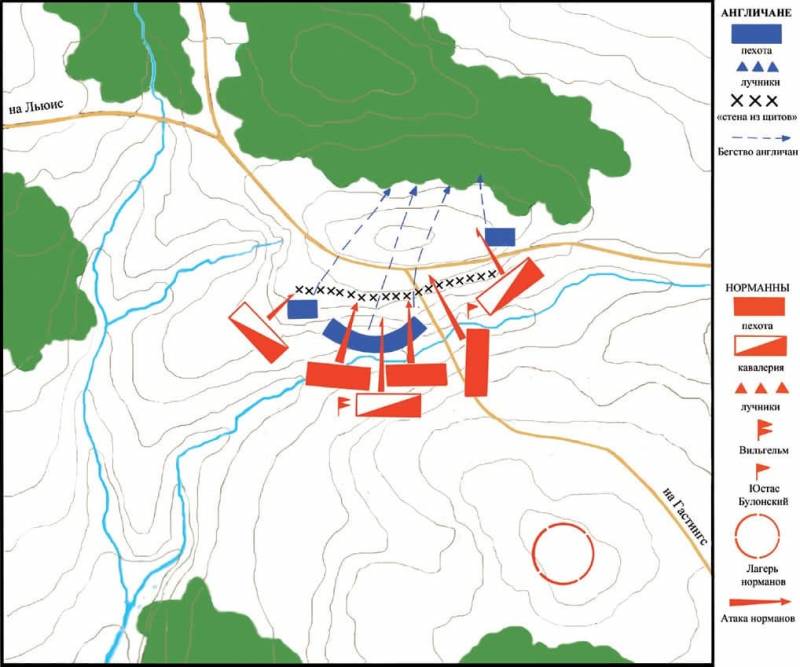 Fifth phase: The Norman infantry and cavalry work together to overcome the thinned "shield wall", Harold dies, and his surviving warriors are saved in the forest, where they mount their horses and take flight
To be continued ...