What happened in Kazakhstan and why Russia sent troops there 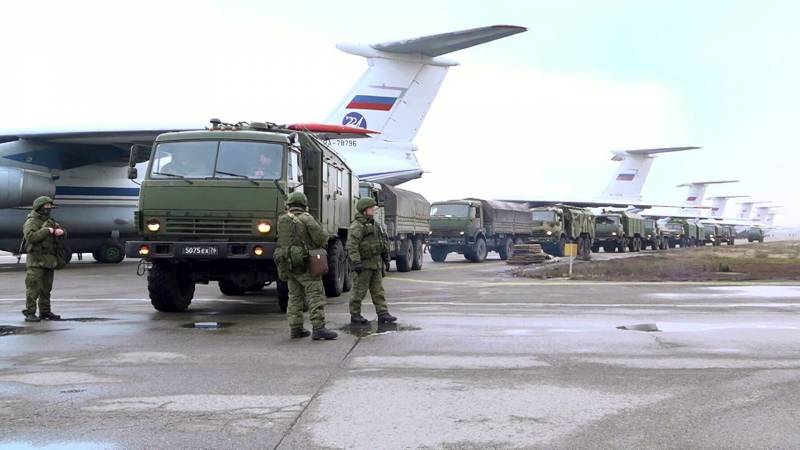 First, this is a classic revolutionary situation.

"The lower classes do not want to live in the old way."

A sharp exacerbation above the usual needs and misfortunes of the overwhelming majority of the people against the background of the constant enrichment of the ruling elite, clans-families, oligarchs, big business and the higher bureaucracy.

Sharp discontent of the lower classes, which for three decades were gradually deprived of the achievements and conquests of the era of socialism, which was especially aggravated in recent years, when the crisis of capitalism escalated into a hybrid fourth world war (the third cold world war ended with the destruction of the USSR and the social bloc), which is waged under information cover "Pandemic" has reached its peak.

The global "reset", in essence, is a light version of the world war, without missile and bomb strikes (although in places like Syria or Yemen, they are also present), without air armadas and tank avalanches, but the result is the same. Supermortality, the destruction of the world economy, a revolution in prices for literally the entire range of goods, in some places already hunger, a decline in welfare and a sharp impoverishment of the bulk of the people, the destruction of the middle class, the flow of capital into the hands of the rich and super-rich plutocrats.

And in Kazakhstan, the last straw was the sharp rise in the price of liquefied gas. It is possible that this was a deliberate provocation of a part of the local elite.

Secondly, at the same time, a situation is emerging that "the upper classes cannot govern in the old way."

The ruling elite of Kazakhstan as a whole behaved obediently and carried out the target instructions of the world elite-mafia on vaccination and digitalization (course towards the world “digital Babylon”).

Westernization of the top, with the transfer of capital, families, children, relatives, mistresses, lovers to the West.

Plus, albeit a mild, but consistent de-Russification, de-Sovietization, reduction and squeezing out of the Russian, Russian-speaking community of Kazakhstan.

The growth of nationalist, Islamist and pan-Turkic sentiments, with the increasing influence of Turkey.

Against the background of this, a split occurred at the top, some of which are dissatisfied with the omnipotence of the elbasy (head of the nation) Nazarbayev's clan, the division of power and property. Part of the elite decided to use the discontent of the lower classes to redistribute power and capital.

It is possible that the opposition elite had tacit support from outside. For example, through Turkey and Great Britain, with the involvement of the potential of local Islamist jihadists, criminals.

The grassroots protest itself would be immediately crushed if the ruling clans were united.

That is, the uprising was clearly being prepared.

There was information about the training camps under the control of the National Security Committee of Kazakhstan (KNB), a similar picture was earlier in Ukraine, where the Nazis were trained. The fact that some prisons and zones were opened, releasing criminals, hence the surge in crimes, looting. Thus, “international terrorists” appeared, on whom all sins could be blamed.

In addition, at the beginning of the riots, part of the Kazakh security forces clearly "merged", supporting the protests or not interfering with them (facilitating). Also, some arsenals were handed over to the rioters.

At the same time, the conspirators did not prepare an alternative center of power in advance.

The protesters, apparently reinforced by provocateurs and coordinators, were used to demolish the Nazarbayev clan. Ordinary people, like in Ukraine, were assigned the role of "cannon fodder". The Moor did his job.

The Nazarbayev clan was demolished.

It is very interesting that everyone immediately forgot about the “great leader and helmsman”. And "loyal" dignitaries and ordinary people.

A couple of days and that's it: forgotten and written off! This is how worldly glory passes. 30 years of personality cult.

And there was no personality. Only relatives and friends of billionaires, who for more than a generation have plundered and taken away the country to various foreign caches, and bought up palaces all over the world.

Nazarbayev was legally the life-long leader of the Kazakh Security Council, a shadow ruler. No suspension procedure.

Tokayev simply appropriated the powers of the head of the Security Council. But no one was outraged.

Such are the laws of the jungle. As long as you are strong, you are respected, at least outwardly. This is a signal to the Russian Kremlin. The transit of power is clearly curtailed.

Thus, it is a classic palace coup.

The realities of the "brave new world" on the periphery of the western metropolis. Nazarbayev and his clan were removed from power. And there and then the protesters, accusing everyone in a crowd of "terrorists", began to shoot. True, their siloviki did not want to become punitive, and the protests turned out to be more large-scale, they began to get out of control, so they attracted the CSTO (mainly Russia). The new rulers of Kazakhstan will establish their position with the hands of the Russian Federation.

Thus, the people will receive nothing. Some indulgences, which were given and promised, will not change anything.

Prices went up again. The impoverishment will continue. Family clans will redistribute power and property. They will show loyalty to the global mafia, driving people into a "digital concentration camp". Plus the tightening of control, new bans against the background of the fight against "terrorists".

It would still have to send troops

It is obvious that Russia in any case should have intervened in the Kazakh turmoil.

It is clear that the masters of the West are satisfied, a new "front" of the world war has been opened. Against the background of the alarming situation in Afghanistan, the uprising in Kazakhstan.

The Russian Federation has to use material resources to support the Central Asian regimes of bai khans, so that they do not slide even lower. Russia is scattering forces and means, moreover, it sends selected elite troops, saving Kazakhstan and Central Asia from sliding into a funnel of chaos, inferno.

Indeed, without Russians in Kazakhstan and wider throughout Central Asia, the current regimes will easily collapse. The remnants of the post-Soviet cultural shell will fly off. A bloody mess will begin. The wildest surge of nationalism, Islamism and Russophobia. Carving out the remains of the Russians. Zhuzes, clans and clans will begin the division of power and property.

Radicals from Afghanistan will climb there. There will be an analogue of the Taliban or the black caliphate. Russia's southern underbelly will be under dire threat. Millions of crowds of refugees, migrants, a surge in crime and jihadists already from the Russian Federation itself, the flow of drugs, etc.

But the problem is that by introducing peacekeeping troops into Kazakhstan, we retain the same power of the local mafia clans. Which parasitizes the people and follows the instructions of the older "brothers" from the IMF, UN and WHO.

Moscow will hold Kazakhstan for the time being.

Plus the support of China, which also does not need unrest in Central Asia, which threatens its Muslim, Turkic regions.

Prospects are vague - the positions of the West, Turkey and China will strengthen. The policy of de-Russification continued, as the growth of nationalist, pan-Turkic sentiments, Islamism (in which ordinary people will look for an opportunity for justice).

So far, it turns out that we see an analogue of the policy of legitimism of the model of Tsar Alexander I or Nicholas I, who saved the Austrian or Turkish empires from collapse to the detriment of Russian national interests. We saved Austria from the Hungarian uprising, Porto from the mutiny in Egypt, we did not use the uprising in the Balkans against Turkey.

How did they “thank” us?

Wars and extremely hostile politics. In particular, the Crimean War.

The situation is similar now.

It must be remembered that the Soviet government created the Kazakh statehood (like others in Central Asia or in Ukraine, in the Baltic States). The Soviets gave Kazakhstan the southern Russian regions of the Urals and Siberia, the lands of the Ural and Semirechye Cossacks. The USSR created the scientific, educational, cultural, economic potential of the Kazakh SSR. The Russian and Russian-speaking population (Little Russians-Ukrainians, Russian Germans, etc.) prevailed in the northern part of the country, creating the basic production potential of the republic.

How did the Kazakh authorities thank the Russian Federation?

A "soft" but confident course of purging the country from representatives of a non-"titular nation", from the Russian language. That led to the mass exodus of Russians and Russian-speaking, with the simultaneous and natural degradation of culture, science, education, medicine, and the entire public sphere. Towards archaization, strengthening the positions of local nationalists and Islamists. To a gradual strengthening of the positions of the West, China and Turkey.

So it turns out that Moscow, in the midst of a tough conflict with the West (NATO, the US and the EU), needs to restore the Union (USSR-2), at least partially.

With a course towards social justice within the country, new industrialization and a policy of protectionism for the revival of the domestic economy. And in foreign policy in Kazakhstan, to do what they did not dare to do in Ukraine in 2014–2015.

Since Tokayev's regime is now completely dependent on our bayonets, then Russia must dictate the conditions.

An immediate end to the persecution of the Russian language, to make it the second state language. Suppression of radical nationalists and jihadists. Purge of the elite with the nationalization of the leading sectors of the economy.

Autonomy for the regions of Northern Kazakhstan (West Kazakhstan, Aktobe, Kostanay, North Kazakhstan, Karaganda, Akmola, Pavlodar, East Kazakhstan and Alma-Ata regions), with their possible transition under the protectorate of Russia.

All Kazakhstan must enter the new Union, as well as Novorossia, Malaya and Belaya Rus, Transnistria, Moldova, the Baltic states. The remaining Central Asia is to become our sphere of influence, the source of the resources and labor force available there.

Labor force should not be used in line with liberal, pro-Western policies, tolerance and multiculturalism. When the Russian labor resources are suppressed, depreciated, there is a dilution, assimilation of the super-ethnos of the Russians. Strict control, suppression of ethnic crime.

In return, the new Union will provide the Central Asian republics with security guarantees, which is de facto being done now (our troops are in Tajikistan), the possibility of civilizational, cultural and educational growth, co-prosperity.

Solution of the water issue.

And most importantly, the peoples of Central Asia will get rid of the prospect of becoming “superfluous” in the “new brave world” that the global mafia is building. Where the overwhelming majority of ordinary people are "superfluous", or "two-legged tools" are slaves.

If this is not done, then the decomposition of Central Asia will continue.

Only some khans and bais will be replaced. As well as the impoverishment of the common people, the enrichment of the ruling clans.

And the Kremlin, also following the lead of the masters of the West, will receive a Ukrainian-Kazakh scenario already inside the country.

It is already obvious that the United States and the West as a whole will not accept Moscow's ultimatum. Westerners will not give up on Ukraine as the main "battering ram" against Russia. New tough sanctions are possible (for example, in the field of electronics), followed by a new collapse in the welfare of the people.

Then another provocation in the Ukrainian direction, or a new explosion in Central Asia. The conflict with Turkey, the withdrawal of troops from Syria and the scenario of 1917 or 1991.