Zheltoksan 1986: Difficulties in the Transit of Power 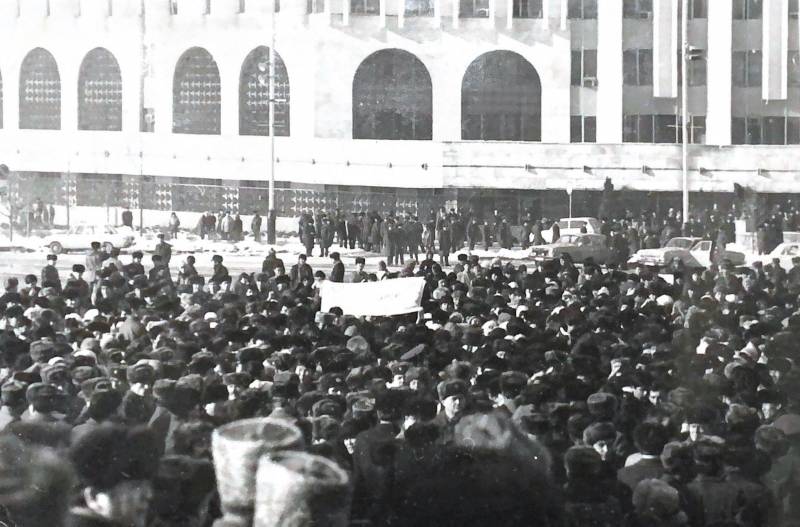 Kazakhstan has always occupied a special position in the Soviet Union.

First, the republic was very closely integrated into Soviet society and economy. The dependence was so great that in the era of the famous "parade of sovereignties" Kazakhstan last announced its withdrawal from the Union. Still, it was not so easy to make the inter-republican border the largest international one in the world.

Secondly, in the Kazakh SSR - the only one among the Union republics - the titular nation did not constitute an absolute majority. If we focus on the data of the 1989 census, then there were about 45% Russians and Ukrainians, about 6% were Germans, and the Kazakhs themselves were no more than 40%. By the way, up to 70% of ethnic Kazakhs used Russian.

The mass exodus of Russian-speakers happened in 1989-1999 - then at least one and a half million people left Kazakhstan. 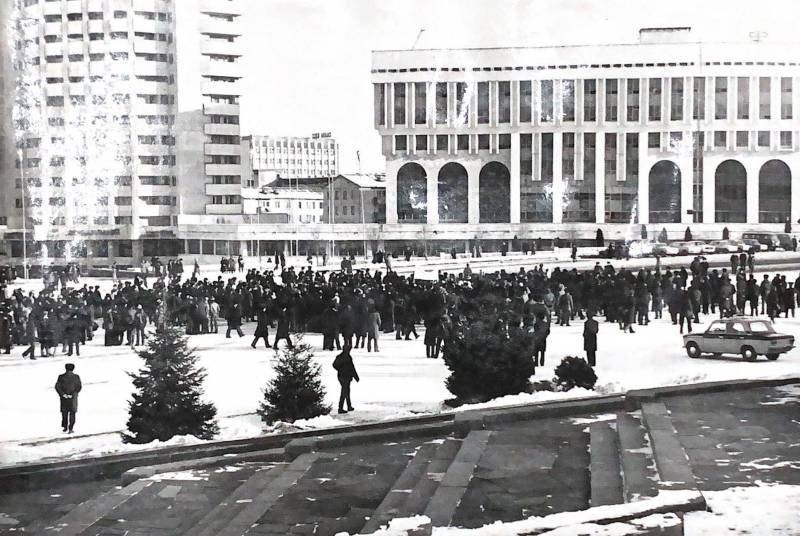 The first call for all representatives of the “non-titular” nationality was the events of December 17–18, 1986, which became the first in a series of bloody inter-ethnic conflicts in the late USSR.

A little background on the event.

Until the mid-80s, Brezhnev's principle of "confidence in national cadres" dominated in the Union republics. Thus, in Kazakhstan, the first secretary of the republican Central Committee of the CPSU was Dinmukhamed Kunaev, who was on very good terms with Leonid Brezhnev.

The Secretary General appointed Kunaev to lead the Kazakh SSR in 1964, and he worked happily in this post until 1986. In fairness, Kunaev was present in one way or another in the republican administrative apparatus since 1942, when he worked in the Council of People's Commissars. And the post of first secretary was not new to him - in 1960-1962 it was his chair.

If you look at the chronicles of the turnover of the first persons of Kazakhstan in the Soviet period, it turns out that there were only two ethnic Kazakhs - the mentioned Kunaev and Ismail Yusupov. However, some historians attribute the latter to the Uighurs. The rest of the leaders were of Slavic origin.

But by 1986, interethnic tensions reached their limit, which resulted in the December events that entered history as Zheltoksan, that is, the "December uprising." 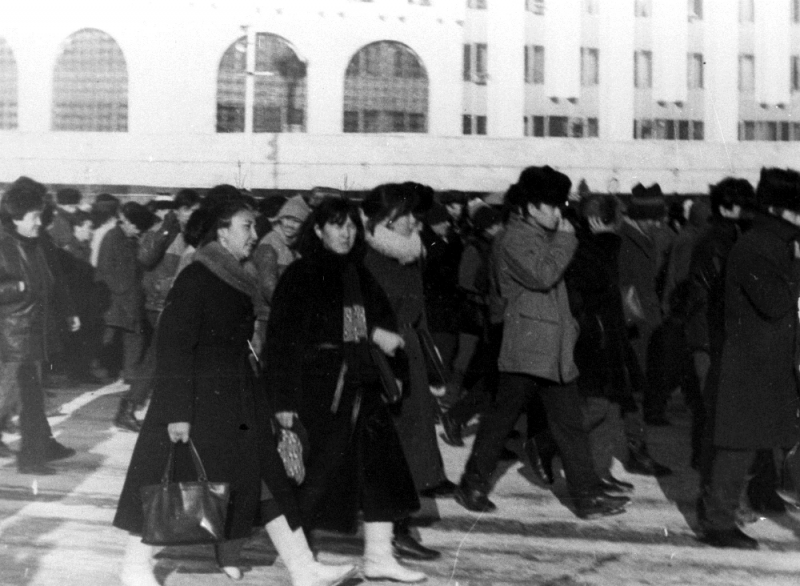 For the titular nation, everything was ruined by Mikhail Gorbachev, who, upon coming to power, organized a purge of the old nomenklatura guard.

Kunaev fit this definition very well - the "republican elder" turned 76 years old. Gorbachev was not the most far-sighted politician, which he will prove more than once before and after the events described.

The Secretary General in December 1986 decides to get rid of Kunaev and puts in his place Gennady Kolbin, the first secretary of the Ulyanovsk regional committee. Formally Kolbin's candidacy was proposed by Nikolai Ryzhkov and Eduard Shevardnadze, and the only one who opposed was Geidar Aliyev.

The new leader had nothing to do with the republic, he did not know Kazakh, and he did not understand how to behave with the local elites. Evil tongues claim that the newcomer showed himself very zealously during the anti-alcohol campaign, for which he was brought closer to the court of Gorbachev.

At the same time, Kunaev himself was removed very ugly - in absentia for health reasons and in just 18 minutes at the shortest plenum of the Central Committee of the CPSU.

Why was the budding Chairman of the Council of Ministers of the Kazakh ASSR Nursultan Nazarbayev not put in this place?

By the way, he was very suitable for the generalized portrait of the manager of the new Gorbachev formation - young, energetic and well-connected.

According to one version, Kunaev himself did not advise Nazarbayev to take the place of successor, which could have been decisive in the choice. In further history, it is the future Elbasy who will become the most controversial figure in the protests that unfolded in Alma-Ata on December 17-18, 1986.

According to another version, the Kunaev clan is so mired in corruption, nepotism and abuse that putting a local on the post of first secretary of Kazakhstan was like changing an awl for soap. According to the security forces, surrounded by Kunaev, 41 secretaries of the district committee, 3 first secretaries of the regional committee, three chairmen of the regional executive committees were prosecuted.

A trial balloon before the transit of power in Soviet Kazakhstan was the replacement of the chairman of the republican KGB, Kamaliderov, with Viktor Miroshnik in February 1986.

Less than a year later, it was Kunaev's turn.

In one of the studies of the chronology of the December 1986 events, there are such characteristic words:

“Such a command-administrative method of replacing leading personnel (Kunaev with Kolbin) carried out by the Center, and its disdain for local personnel of the republic, deeply offended the honor and dignity of Kazakhstanis and sowed doubts about the correctness of its management methods in Kazakhstan.”

These were the first political, rather than economic demands of the protesters in many decades of the existence of Soviet power.

Outraged by this state of affairs, young people took to the streets of Alma-Ata with placards "To each people - their leader!", "Long live Lenin's ideas!"

According to the liberal part of the observers, the protesters did not want anything reprehensible, but only tried to ask: why did they remove Kunayev and install the foreigner Kolbin?

And until now in Kazakhstan there is an opinion about the excessive cruelty with which the protest of student and working youth was suppressed.

Allegedly, in order to clean up Brezhnev Square (now it is Independence Square), the authorities raised up to 25 soldiers along with 15 combatants. Moreover, they flavored the army with a dozen armored personnel carriers and a dozen fire engines. 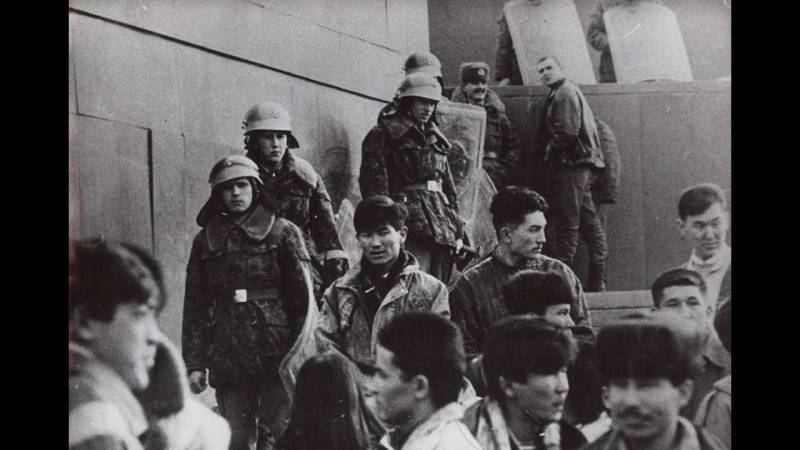 However, there is an alternative point of view on the events that unfolded in December 1986 in Alma-Ata.

In the early morning of December 17, several thousand aggressive people gathered on the square in front of the regional committee.

It is worth paying attention that the removal of Kunaev became known even in Moscow on the evening of December 16, and already at 7:00 the next day the people protested against the decision of the Central Committee in Kazakhstan. This is even by modern standards a lightning-fast reaction, and for the events of 36 years ago, it does look like science fiction.

Kunaev himself, together with Nazarbayev (or separately), raised the people to revolt.

At the same time, during Zheltoksan, the future Elbasy himself demonstrated in every possible way loyalty to the current government and, according to eyewitnesses, spoke to the protesters, “explaining the perniciousness of illegal actions.” A little later, he mentioned the protesters as

"extremist-minded thugs who were able to captivate the socially unhealthy part of the student youth."
But already in 1991, the events of Zheltoksan were glorified, and in his book “Without Right and Left,” Nazarbayev writes that he stood on the square shoulder to shoulder with the revolutionaries. 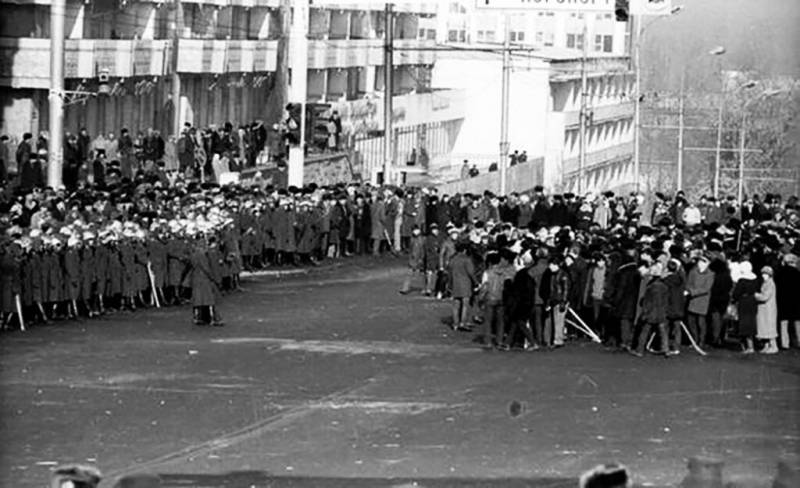 What happened in December 1986 in front of the regional regional committee of Kazakhstan was very reminiscent of the situation at the beginning of 2022, when thousands of rebels stormed the akimat of Alma-Ata.

Only now, 36 years ago, it ended in failure, although not without loss of life.

But at first, the protest developed peacefully - from the morning of December 17, the audience chanted slogans, and law enforcement forces did not even organize a cordon.

Closer to dinner, several hundred people went in an organized column through the streets of the city, gathering in their ranks a mass of new sympathizers. It was in one of these columns that Nazarbayev himself marched, as he himself later claimed.

A few hours later, several thousand excited protesters returned to Brezhnev Square, to which replenishment constantly arrived from all over the capital.

Law enforcement officers did nothing intelligible to stop the threat - the roads to the center were not blocked, the crowd was not cordoned off.

After the speech of the leadership of the republic, stones and pieces of reinforcement flew from the crowd at the military and police officers on duty.

And again, no decisive action from the security forces - exactly like in January 2022.

Didn't the republican leadership have the resources to contain the protesting crowd, which was already shouting nationalist slogans?

Of course, they were, but they could not use it or did not want to.

Everyone was waiting for the so-called "Moscow landing", consisting of Deputy Chairman of the KGB of the USSR F. D. Bobkov, Chairman of the CPC under the Central Committee of the CPSU M. S. Solomentsev, Deputy Minister of Internal Affairs of the USSR B. K. Elisov and Deputy Prosecutor General of the USSR O. V Magpie. Only after the arrival of the delegation, troops and fire engines were brought to the square, which abundantly watered the most aggressive protesters in the cold.

The key role in suppressing the impending uprising was played by the cadets of the Alma-Ata school, who were given only sapper shovels and clubs to restore order. Through the efforts of cadets and fire fighting equipment, by one in the morning on December 17, the last inhabitants of Brezhnev Square were dispersed.

But only to start the protest action with renewed vigor at dawn.

The law enforcement agencies began to act according to the usual scheme - for several hours they actually provoked the crowd, and then, with unexpectedly harsh measures, they dispersed it by late evening.

The operation to pacify the nationalists on Brezhnev Square went down in history as "Blizzard - 1986". 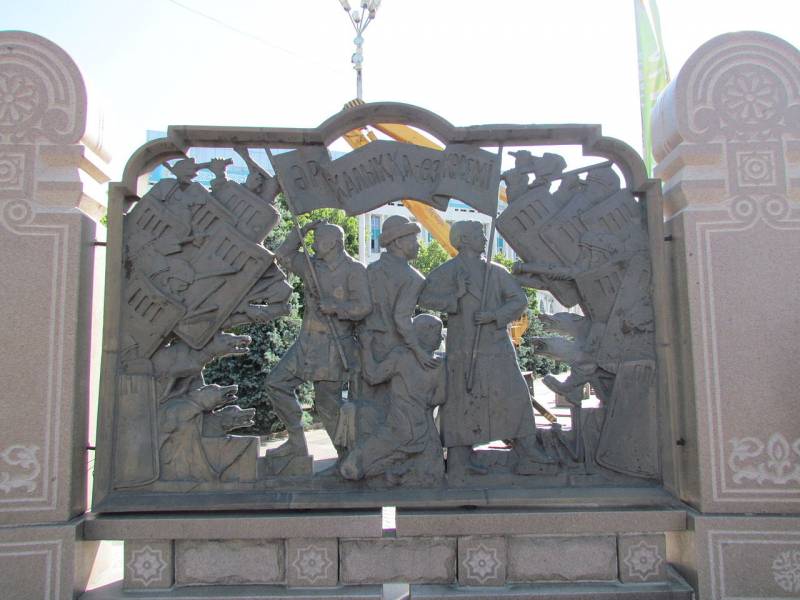 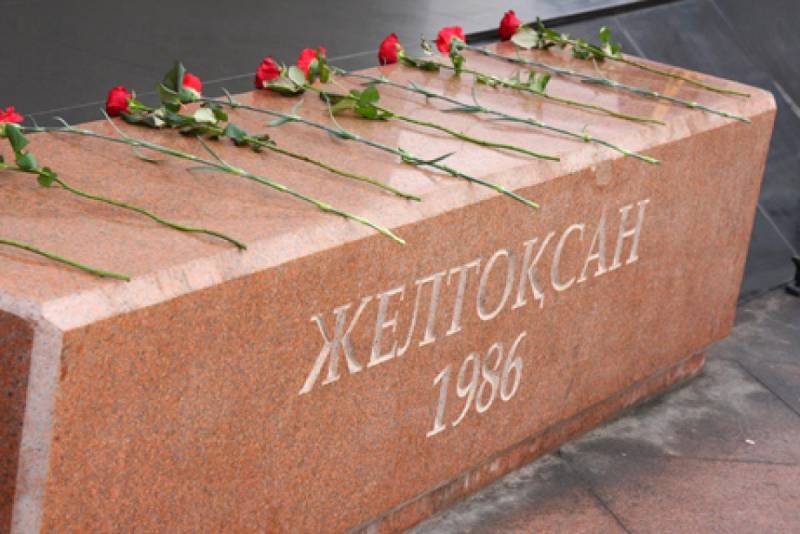 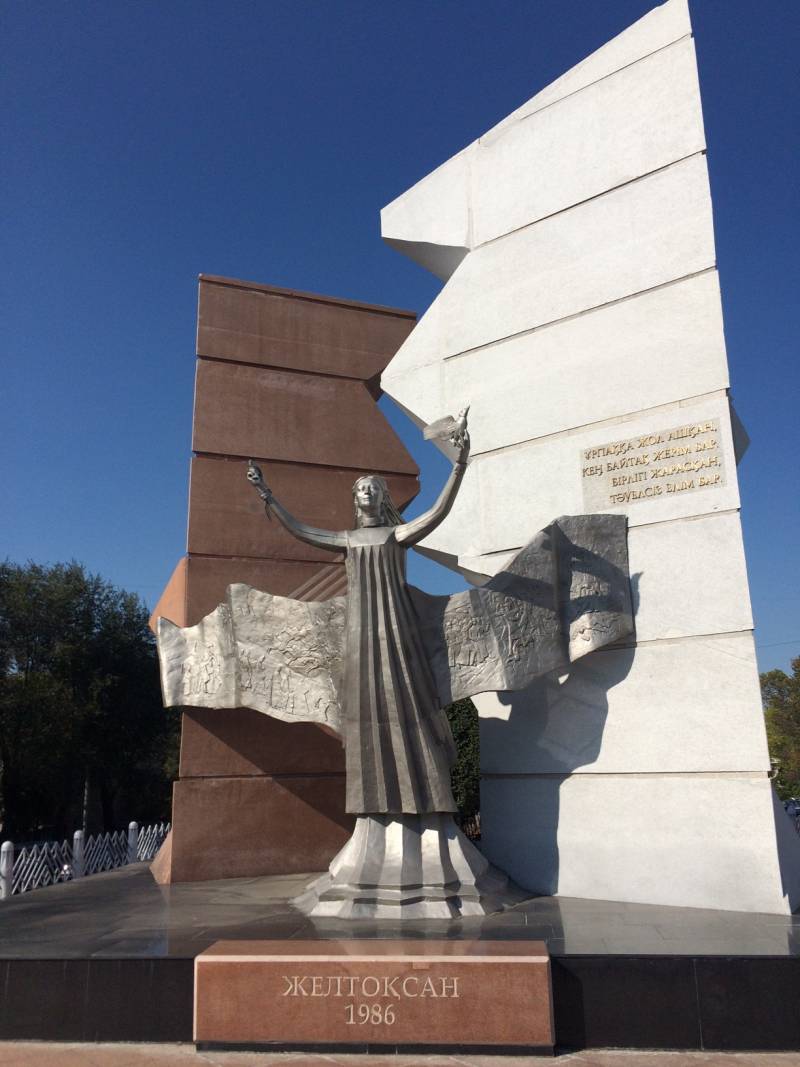 Memorial Zheltoksan. Source: wikipedia.org
According to the official version, 6 people died, several thousand were injured of varying severity, 99 were convicted, and two were even sentenced to capital punishment, which, by the way, was never carried out.

Over time, most of the convicts were rehabilitated, and the Zheltoksan protesters became almost national heroes of the new, sovereign Kazakhstan.

History has acquired a bunch of legends about several hundred killed, raped and tortured.

All the blame for what happened was traditionally placed on the same “Moscow landing”.