Russia is dancing to the tune of NATO, but pretends to be playing its own game 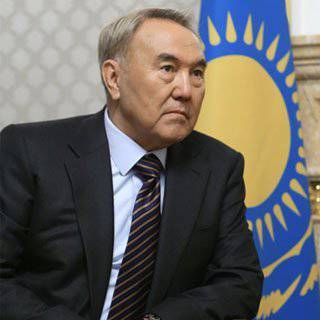 Therefore, another initiative of Nazarbayev will die without being born.

The idea of ​​the Kazakh leader Nursultan Nazarbayev can be called whatever you like - a project of the century, a utopia, a model of public relations or even nonsense, but one thing is sure: the very proposal to create a qualitatively new “platform of Euro-Atlantic and Eurasian security” is a significant event. If only because in the course of subsequent discussions, it is likely that masks will be torn off someone’s face, and the “partners” simply get to know each other better.

But it is at least. Nazarbayev himself is pointing far away - to unite representatives of the most different (sometimes diametrically opposed) structures of international security in order to finally deal with this very security, so far, according to a source close to the president of Kazakhstan, it’s not very good: associations in the Euro-Atlantic and Eurasian space the potential for cooperation in solving security problems is used to a minimum extent. Our idea is to fill this gap. ” At the same time, a source in an interview with Kommersant stressed that it is not at all about creating a new bulky structure burdened by administrative and bureaucratic means. Kazakhstan assumes that a qualitatively new superstructure must become flexible in its form and extremely concrete in content, i.e. be focused on specific results.

In this case, the "salad" is supposed to nastrogat of ingredients that seem radically incompatible. The structure should include representatives of the UN, NATO, CSTO, OSCE, CICA, SCO, EU and CIS. In Moscow, such an ambitious swing received a restrained and friendly assessment. “Any proposals aimed at improving the work of international organizations and strengthening ties between them can only be welcomed. However, taking into account previous efforts to establish such cooperation, I can say that this is not an easy task, ”a source at the Russian Foreign Ministry said to Kommersant. In the foreign policy department, Nazarbayev was also reminded of the previous unsuccessful attempts to establish cooperation between NATO and the CSTO, and the goal was then proclaimed very specific and one that it would have seemed to be simply indecent to refuse - the suppression of Afghan drug trafficking. But the novel ended, without having begun. “We ourselves are with a mustache,” the answer came from Brussels, and the topic was declared closed.

And now from the headquarters of NATO came a disappointing response. “We most often heard about such high-profile projects in 1990's, then everyone wanted to become a cook of some great institutional soup. Now is not the time of cumbersome initiatives, it is necessary to solve urgent problems promptly, ”a representative of the North Atlantic Alliance, interviewed by the publication, announced the verdict on the Nazarbayev initiative. At the same time, he himself called the proposal “quite good, albeit unrealistic.” It is all the more difficult to argue with the second after the thesis repeatedly stated in the American top that the CSTO and the SCO are governed by “non-democratic regimes”, and these structures themselves clearly contradict the presence of the West in Central Asia ...

But it’s still great that in the cynical world of politics there are still people who believe (and, it seems, sincerely) in miracles.

In a conversation with a KM.RU columnist, the chairman of the supervisory board of the Institute for Demography, Migration and Regional Development, the leader of the Development Movement, Yuri Krupnov, pessimistically assessed the prospects for the idea of ​​the Kazakh leader:

- Of course, this initiative does not have great prospects, but we must understand that it was generally proposed in a certain sense out of desperation, since Nursultan Abishevich, I am sure, is experiencing enormous difficulties in understanding the security policy pursued by Moscow. Indeed, on the one hand, in the Russian military doctrine, in the national security strategy, as well as in the decisions of the CSTO, the inadmissibility of NATO penetration into the Russian Federation and even into the CSTO zone of influence is clearly stated. And this is a tough setup.

But on the other hand, the Russian Federation concluded the standard NATO agreement on the transit of goods, undertook to ensure this transit through a staging post in Ulyanovsk, which in fact is a standard NATO logistical base of NATO. And, of course, all leaders of independent states (not only Nazarbayev) have a complete misunderstanding of Moscow’s position. From here, and attempts to somehow propose solutions, to create institutions that would really be able to carry out all this mixed policy of the Russian Federation in the format of some integrated complexes of the type proposed by the head of Kazakhstan.

It is clear that this initiative will not cause any sympathy and desires for Moscow or for NATO to begin its implementation. After all, NATO solves all questions as it sees fit, and directly with everyone, including with Moscow and Astana. Russia, in fact, is dancing to the tune of NATO, but at the same time it wants to pretend that it is playing some kind of its own, separate game, and therefore also will not participate in the events under this Nazarbayev initiative.

- How do you think, what will this initiative of the President of Kazakhstan ultimately result in?

- And nothing will pour out. It is proposed to involve very diverse institutions. And, moreover, their very heterogeneity, I would say, is due to the lack of a clear security policy on the part of Moscow. As a result, we have about a dozen different institutions sitting in the Eurasian post-Soviet space, and there is no increase in clarity where we are going. So the idea of ​​Nursultan Nazarbayev, unfortunately, does not have prospects.