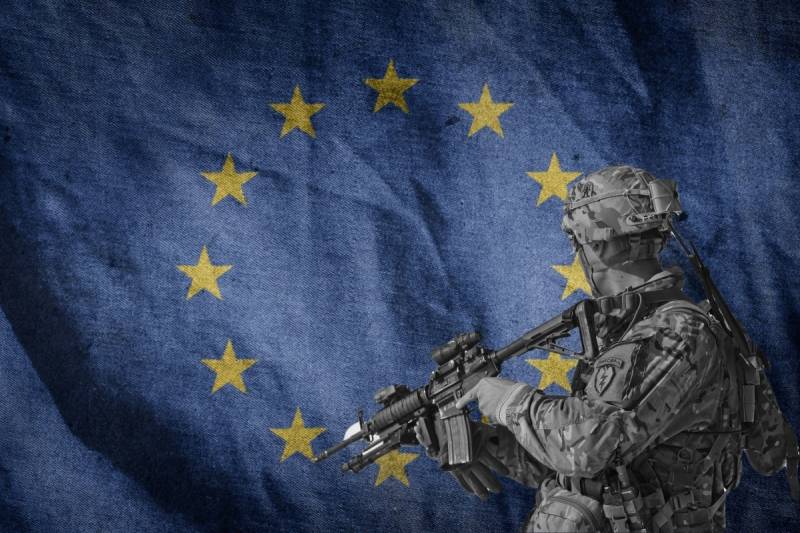 From time to time, as one or another NATO or EU official remembers the idea of ​​a unified European army, the press begins to discuss and analyze this idea and comes to the conclusion that now these are just dreams.


Indeed, why create another army when there is already a sufficiently strong NATO military bloc. We clearly see how most Europeans find it difficult to part with the money, which, according to the agreement, must be given for the maintenance of the alliance. This means that Europe will not have its own army.

Meanwhile, if you look at this idea a little more broadly, you can see that to some extent it has been implemented for a long time in Europe. This is how the European Program for Permanent Structured Defense Partnerships (PESCO) was adopted four years ago in December 2017. It became one of the components of the new "EU Global Strategy for Foreign and Security Policy".

It was then, at the end of 2017, that the EU first thought about whether the United States would defend Europe or abandon it at the most crucial moment. Remember the summit at which the EU just put forward the idea of ​​creating an autonomous European security and defense system.

The Americans, realizing that the creation of a military structure not controlled by the Pentagon would not only lead to the loss of complete control over the Europeans, but would cause enormous damage to the US military industry, actively opposed this idea and made PESCO become a kind of "public European organization", participation in not at all necessary for Europeans.

We have been talking and writing for a long time that the EU is actually occupied by the United States, and American bases in Europe serve not so much to defend against the Russian threat as to maintain regimes loyal to the United States in European states. This is understood not only by the Americans, but also by the Europeans themselves.

We remember President Trump and his policy towards Europe.

To quote the report of the Directorate General of the European Parliament for Foreign Policy:

“The new American president may disregard European security and make a deal with Russia, disregarding the opinions of Europeans and representatives of the former Soviet republics, who are trying to free themselves from Moscow's embrace.
There is also a possibility that in France and, possibly in Germany, political forces will come to power in the upcoming elections, taking a softer position in relation to Russia. "
It is clear that, having lost the support of the United States, as we see in the report, the Europeans are thinking. Accordingly, the path of a global confrontation with Russia without US support is not very promising. There remains cooperation with Moscow in some areas. In parallel with this, the creation of its own defense system.

By the way, in the same report there is a piece that will answer the question of sanctions against Russia.

Why, with so many sanctions, European countries cooperate with Russia in many areas?

“Moscow’s relative resilience to sanctions only fuels this disappointment: the sanctions certainly hurt the Russian economy, but they didn’t change Russia's position on the Ukrainian conflict and didn’t make it more flexible on international issues in general (we saw, for example, Syria, the suspension of the agreement about plutonium).
Calculations that the need to attract new European investments, in technology and industrial cooperation can restore pliability to Russia turned out to be short-sighted. "
So, on the one hand, American President Trump with his idea of ​​the onset of an "era of confrontation between global powers", on the other hand, the collapse of the policy of anti-Russian sanctions, which only help Moscow to develop its economy in the absence of competition from Western manufacturers, gave rise to the desire of Europeans to create their own security system ...

But there was another serious reason.

The Americans are using their dominant position in NATO to lobby for the interests of their military industry. At the same time, the cost of American weapons and equipment is simply off scale, and the quality raises questions. Military factories in European states, at best, work only for their own army.

Europeans cannot speak openly about their desire to make money on military orders. This will provoke a harsh reaction from the United States. But disguising your actions as the US and NATO assistance program is a way out.

The PESCO program lives and develops

In my opinion, there are really serious programs that cover many countries. These programs will in fact be of great help to NATO during this special period. For example, the Military Mobility program.

Remember the NATO exercises, at which such incidents took place that did not cause anything but laughter?

For example, stopped by bridges Tankswhen it turned out that heavy and large armored vehicles simply cannot be transported by rail. Or the ban on the landing of British Marines due to the lack of a quarantine permit.

"Military mobility" is precisely designed to quickly resolve such issues. Obtaining permits for travel through the territory of countries, permits from various sanitary control authorities and other things. Simply put, in the end, the program should create a military infrastructure that can solve fast logistics issues, as, for example, it is done in Russia.

Or a program for the creation of bases for the joint deployment of units and subdivisions. Not to mention the program of unification under one command of military warehouses in all European countries. This should also include the program of uniting cybersecurity specialists into a single whole. Cyber ​​Rapid Response Teams, CRRTs, Cyber ​​Rapid Response Teams.

But the main thing that the PESCO program is focused on is the creation of international partner organizations for the design and production of equipment and weapons for the European armies and for export. There are a lot of such programs.

Around a country that is capable of doing something in some area, several more countries are united that can produce components. For example, France has vast experience in the creation of space rockets and aircraft, so she will lead the corresponding programs.

The list can be long. The reach of the collaboration is impressive. From the EHAAP (European High Atmosphere Airship Platform) reconnaissance airship and the creation of European drones, middle-class UAVs (Medium Altitude Long Endurance) to the program of creating a structure for coordinating joint military and civilian medical operations.

As you can see, the EU's Permanent Structured Defense Partnership program is serious. This is nothing more than an attempt to create such structures that would allow, in the event of another American outburst, to quickly create and arm a European army proper.

When can we see the fruits of PESCO?

The question is quite serious.

Those programs that existed before November of this year and continue today, for the most part, are planned to be completed by 2025. Probably 2025 will be the real time for the implementation of the plan.

So far, the PESCO program is declared in all EU documents as an aid and addition to the actions of the NATO bloc. However, a little less than a month ago, in November 2021, the EU approved the addition of 14 more to the existing programs.

As a result, the program of permanent structured defense partnership today includes 60 programs!

Moreover, among the added programs there are a lot of those that are now being dealt with in NATO only by the United States. For example, the program for the creation of spacecraft protection. I have already mentioned the production of UAVs and new weapons systems.

Moreover, today the EU is developing a new defense concept "Strategic Compass". Moreover, they plan to adopt this concept no later than next spring. It seems to me that this document will already contain a certain independence of European units from the NATO alliance.

In general, if the PESCO program is not "strangled" by the Americans, with its competent implementation, without excessive fanfare and advertising, it may well become one of the cornerstones for creating a real European army.

Is the program a cause for concern?

Europeans, like us, remember the horrors of World War II. They remember the results of the campaigns to the East. Therefore, it seems to me, it will be much easier to negotiate with them than with those for whom World War II is nothing more than a war over islands in the Pacific Ocean.