Through the eyes of a man of that generation 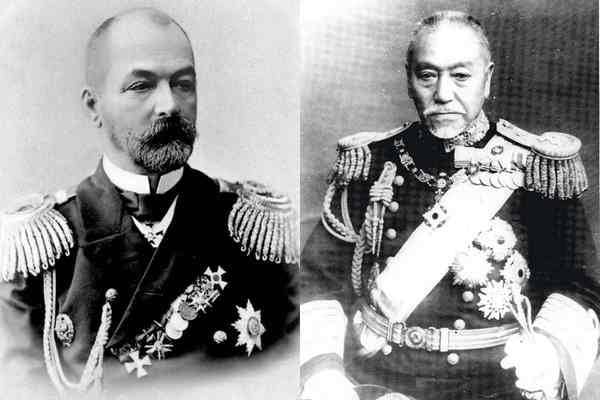 Immediately, I note that the Russian admirals studied the experience of previous wars carefully and carefully, the Russian fleet by 1903 was one of the most advanced, which is why it turned out that it happened. And the experience of past years clearly said that battleships do not sink from artillery fire. They can be threatened by mines, torpedoes, ramming, shoals, loss of control, but not drowning. There was no such thing. There were fires leading to the loss of combat effectiveness, but there was no drowning. The experience, by the way, was rich, armored ships in that era were used en masse.


1. Crimean War. Three floating batteries of the French - the first, in fact, battleships, approached the Kinburn Spit. The cannonballs of the Russian cannons did not pierce their armor, and they won:

“The French floating batteries opened fire at 9.30 am, and throughout the day their firing was remarkable for its accuracy and efficiency. The Russians responded readily, and the batteries were surrounded by columns of water raised by Russian cannonballs. The success of the experiment (armoring floating batteries) was perfect. They anchored just 800 yards from the Russian batteries. Enemy cannonballs, even at such a small distance, could not damage them - the cannonballs flew off their sides, producing an effect no greater than pistol bullets on a target in a shooting range. One could hear the distinct impacts of the cannonballs on the sides of the batteries, and see how they fly away from them in the direction from which they were released, and, having lost their strength, fall into the water. One of the batteries counted 63 holes from the cannonballs only on the plates of one of the sides - not counting the marks from the cannonballs sliding across the deck, or holes in the bulwark, but all the damage to the armor was reduced to three knocked out rivets. "
2. American Civil War. The famous fight between Monitor and Virginia. The long skirmish of battleships ended with nothing, well, except for the consumption of shells and the fatigue of the crews. The armor defeated the projectile again.

3. The Battle of Liss. "Palestro" died from the fires that led to the explosion of the BC, "Re d'Italia" was destroyed by a ram. The cannons did not destroy anyone. Moreover, the loss of crews on the surviving ships was moderate. The armor proved again that the projectile was never an argument in the battle of armored ships.

“On the one hand, there were 8220 tons of displacement, 800 crew and 40 cannons; the displacement of the "Huascar" only slightly exceeded 1/5 of this amount, and its armament consisted of five guns. And yet the British were unable to capture or destroy their enemy. The explanation for this circumstance can be found in the fact that these were cruisers built to fight cruisers, and not in order to engage in battle with ships like the Huascar, of a completely different type. The Shah was not armored, while the Huascar was fully armored. "
«Protected by armor”And decided the case. The Huascar, which had not lost its combat capability, retreated without problems. However, the British did not suffer, but here it is rather the inability to shoot the Peruvians. And this is already 1877, the period of the formation of naval officers Makarov, Stark, Vitgeft, Rozhdestvensky ...

5. Sino-Japanese War. Again a battle of guns and armor, and again a word to Wilson:

“So, the battle at Yalu not only did not prove the superiority of non-armored ships, but it showed that armor is necessary for those ships that have to take place in battle formation. As in the bombing of Alexandria, it has now been proven that in practice the resistance of the armor is much greater than one might imagine after its tests at the proving ground. It is best to protect the sides over a long distance with medium thickness armor, and this is what we see on the Majestic. This will save lives, and the ship itself will be very difficult to sink. "
The armor is stronger than the projectile. And finally, the Spanish-American war: pure artillery did not sink armored ships. They died from fires and loss of control, from the loss of squadron command and from poor crew training. The Battle of Santiago is already 1898 ...

Conclusions in Russia were made, and conclusions, logically consistent, from rams on early ships to torpedo tubes on battleships. From armored casemates to medium caliber artillery towers. Work was also carried out to increase the armor penetration - from the Makarov cap to armor-piercing lightweight shells. And then the Russo-Japanese War began.

And what did she show? The Japanese lost two ships of the line to mines and zero in three artillery battles. We lost one battleship and one armored cruiser on mines from artillery fire, but the crew opened the kingstones themselves, the Rurik was simply beaten with medium-caliber artillery until they lost control. In the same battle, Iwate got hit in the casemate, so what? And nothing, returned to the base. "Russia" and "Thunderbolt" after the battle, even docking was not required. Simply put, the old rule, known since the days of Kinburn, was confirmed - battleships do not sink cannons. The Yellow Sea was no exception - not even the semi-linear "Peresvet" and "Pobeda" were killed. And so, a typical picture - beaten superstructures, damaged artillery and very rarely the hull. And no one sank.

Conclusion - you need to be afraid of mines, destroyers and the beating of ships that lagged behind the squadron. Another risk factor is the loss of control, which happened all the time during that war. And Rozhdestvensky took into account all the factors to a single one. The tree was removed (fires), the command was built in such a way that it became almost impossible to lose it, they rushed into the strait in the morning, hoping to slip through the narrowness during the day. But it turned out completely different, unexpected for the Japanese as well. But this is already another conversation, and the conversation is more likely about the fact that the RIF admirals were strong professionals, but not geniuses and innovators. Therefore, they could not calculate the factors that led to the destruction of the squadron. Basically, the effective concentration of enemy fire and the degree of beating of our ships of the line, which did not have a base to take cover, and a solid commander in order to retreat.

After all, Tsushima has confirmed the same old rule - armored ships cannons very rarely sink. During the day only "Oslyabya" was killed by artillery fire, which is not quite a battleship. "Suvorov" was finished off with torpedoes, "Alexander" did not cope with the flooding, in other words, was beaten and did not receive help in time, "Borodino" - most likely, an explosion of ammunition, again did not cope with the fires. If the distance was a little more, and the intensity of the fire was less, and eight to ten ships of the line would have passed to Vladivostok. This is confirmed by the cruisers, which also fought a superior enemy all day, but were not constrained in a maneuver by a multi-type column, did not receive critical damage, apart from the target named "Ural". Zinovy ​​was counting on something like this, but he could not foresee the complete lack of initiative of the younger flagships and Baranov. If you are to judge strictly, it should have been, of course.

Well, it got too close, but this is understandable: the Russian artillery was really considered the leading one in armor-piercing shells, and it was a sin not to try, having 35 heavy barrels of only new types, versus 17 from the Japanese. And in addition, a little outdated in the amount of 6 units, which only added optimism. After all, even without a speed advantage, breaking the distance shouldn't have seemed like a problem.

The rest is a search for the extreme, so beloved in Russia, and a black cat in an unlit room, given that she is not there. Everything is in sight: the failure in logistics, and the hope for guns, or rather shells, and the lack of geniuses among the command staff. The Japanese did the same, but Togo was not hurt, and their logistics was not lame.