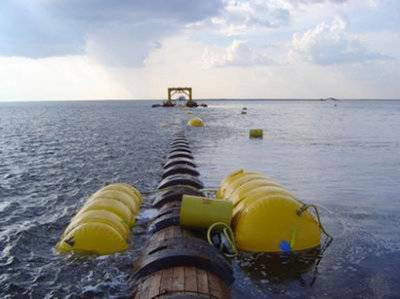 The South Stream project is a key part of the strategy to diversify gas supply routes to EU countries. The new route should directly connect hydrocarbon suppliers with their customers.

On data of the project specialized site, now experts agree that in the medium and long term demand for gas in the EU will increase. Europe, whose resources will inevitably shrink, will eventually require a significant increase in natural gas imports. According to the forecast, the EU's need for additional gas imports by the year 2020 may reach about 80 billion cubic meters. m, and by the year 2030 - exceed 140 billion cubic meters. m

The main declared goal of "South Stream" is just to meet the additional European demand for natural gas. In fact, the implementation of this project takes into account not so much the current interests of suppliers and consumers, as well as tomorrow's. Prepare a sleigh in the summer, and a cart - in the winter!

As for the gas pipeline route, at the pre-investment stage of the project Several options are being considered.. The route includes the onshore parts of the gas pipeline passing through the territories of a number of European countries, and the offshore gas pipelines through the Black and Adriatic Seas (in case of choosing the option of gas supplies to the southern part of Italy).

To provide South Stream with a sufficient amount of natural gas, it is planned to expand the existing and construction of new gas transmission capacities in Russia. A new gas pipeline system with a length of approximately 2,5 thousand km must pass from the Pochinki compressor station to the Black Sea coast. The gas pipeline will cover eight regions: Voronezh, Volgograd, Rostov, Nizhny Novgorod, Penza and Saratov, Mordovia and Krasnodar Territory. Design and survey work has been going on since 2010.

The sea section of the South Stream, about 900 km in length, will run along the bottom of the Black Sea - from the Russkaya compressor station to the coast of Bulgaria. There are several options for the South Stream route along the seabed, but so far the route passing through the exclusive economic zones of Russia, Turkey and Bulgaria is being worked out as the main one.

However, as the Russian proverb says, it was smooth on paper, but they forgot about the ravines and walk on them.

Atomstroyproekt has a serious problem with Bulgaria, more precisely, with its National Electric Company. It would seem, what does the Bulgarian NEC and the Russian Atomstroyproekt have to do with the South Stream? But - have.

Atomstroyexport decided that the National Electricity Company of Bulgaria owed her about 1 billion euros, since the Bulgarian side had abandoned the project to build Belene NPP, panicking over the “post-Fukushima syndrome”. Now the case is being considered in the International Court of Arbitration at the International Chamber of Commerce in Paris. Previously, it was about 58 million euros penalty. “The increase in claims is due to the fact that the project has been prematurely terminated by the Bulgarian government, the agreement expired on 29 in November 2006, and the NEC EAD continues to refuse to reimburse Atomstroyexport for costs and losses,” they say in the Russian company.

Previously, despite the abandonment of the construction of nuclear power plants and the friction over 58 million euros that arose because of this, the South Stream agreements seemed to be moving forward quite well: 29 August 2012, the Russian side achieved positive developments in the negotiations on the gas project (between Gazprom and the Bulgarian government signed the relevant documents). However, not everything was simple here: Bulgaria bargained 11-percent from Gazprom discount on the gas.

When it came to 1 billion euros and the International Court of Arbitration - because of the rejection of Belene NPP - Bulgaria showed claws. Bulgarian Prime Minister Boyko Borisov openly declared that Russia may have problems in implementing the South Stream project, and in addition promised to arrange a “unhappy welcome” to Russian President Vladimir Putin.

According to the Prime Minister, his country fulfills all obligations under the South Stream. As for the nuclear power plant, then by it, as noticed the head of government, “we continue negotiations ...” And since “we continue, then“ we were extremely and unpleasantly surprised by this (Russian) demand. ” Borisov said that in connection with the lawsuit, Bulgaria intends to defend itself in court, despite its “century-long friendship” with Russia.

And yet, Mr. Borisov called Russia’s “treacherous” claim for compensation for the abolition of the construction of nuclear power plants and сказал: “I sincerely hope that President Putin does not know about this. If he knows, he will not like our November 9 meeting in Bulgaria. ”

It is interesting that in the schedule of foreign visits of the President of Russia there is no visit to Bulgaria. About it the other day said Press Secretary of the Head of State Dmitry Peskov. V. Putin is not going to fly to Bulgaria, however, as Comrade Peskov clarified, despite the absence of plans to visit Bulgaria, contacts with Sofia will continue through diplomatic channels.

Where did Mr. Borisov get the information about the upcoming visit of Putin to Bulgaria? Most likely, from the media, which could suggest that the Russian president will give up everything and immediately go to settle the atomic-gas conflicts. As it turned out, no, do not quit.

It should be noted here that the Russian-Bulgarian agreement on the construction of Belene NPP was signed the parties in 2006, and two years later, in 2008, Bulgaria concluded an intergovernmental agreement on South Stream with Russia. In 2009, an agreement on cooperation between Gazprom and the state-owned Bulgarian Energy Holding was signed. In the same 2009-m in Bulgaria, the government changed. The newly elected cabinet headed by Mr Borisov decided to revise the existing energy agreements with Russia. It was Borisov who said that Bulgaria would not build Belene NPP, and also, according to media reports, would also come out of South Stream.

As it was written at the beginning of the article, the route of the South Stream should, according to the main variant, pass along the bottom of the Black Sea, and then through the territory of Bulgaria. Alternatives to the Bulgarian route are less attractive ways to transport gas through Turkey and Greece, or through Romania. The construction of the gas pipeline is scheduled to begin in December 2012, while Bulgaria plays cat and mouse with Russia.

It seems that the newest Sofia policy is based not only and not so much on the conflict over “Belene”: after all, you have to pay a penalty, and still the billion euro will not award arbitration. There is one more important factor due to which Bulgaria can abandon the “South Stream”.

In March, 2012 was discovered on the sea borders of Romania and Bulgaria, an oil and gas field was discovered on the Khan Asparuh shelf area (15 thousand square meters). The offshore oil and gas shelf begins near the port of Burgas and extends to the sea border with Romania. Thanks to these stocks, like сказал Prime Minister Boyko Borisov, Bulgaria will be fully supplied with gas until 2030.

True, the appearance of Sofia’s large gas prospects brought geopolitical surprises. In the government of fraternal Romania, for example, it was decided that the shelf should be disputed by Bulgaria. Especially since Romania has a positive experience of similar (rather long, by the way) disqualification: for example, Ukraine has 2004-2009. through the International Court of Justice of the United Nations, the southern part of the Snake Island shelf was seized.

However, in Bulgaria they believe that the two countries will somehow share the common resources. In Sofia count them.that the dispute is not in the gas wealth itself, but in the fact that the proposed route for the construction of the South Stream just goes through the disputed area. Romania is an investor in the competitive project “Nabucco West”, and she probably expects that, thanks to the court, she will block the Russian project for five years.

Thus, the route of the South Stream depends on whether Bulgaria and Romania agree. Start of construction is scheduled for December 2012, but in which direction to build, it is still not clear.

Romania is interested in pushing the negotiation process with Bulgaria, creating a serious obstacle to the “South Stream” on the Bulgarian route. Bulgaria also wants to divide up resources as soon as possible and start offshore gas production. As in the case of long negotiations or an international court, and in the case of a quick divide, Gazprom will have to change the route. Bulgaria can make concessions only if the shelf is very quickly recognized as completely Romanian - then Russian gas at a discount to Sofia would be very useful. But such issues are not quickly resolved - say, by December 2012, -. This is well illustrated by the practice of litigation between Romania and Ukraine.

Now - to positive news. According to the project, with the “Yuzhny” branch, which is supposed to start in Bulgaria and continue in Serbia, in order then to pass through Hungary to the Austrian gas distribution station in Baumgarten, there were no problems. Serbian President Tomislav Nikolic invited Vladimir Putin to the ceremony of starting the construction of the Serbian section of the South Stream in December.

“We are awaiting the start of work on the construction of South Stream, which will pass through Serbia. This may be at the beginning of December, and since some of my colleagues lacked enough courage, they asked me to invite you to take part in the ceremony to start building the Serbian section of the South Stream, - сказал Serbian president, addressing Putin on September 11 in Sochi.

Thus, Serbia is preparing to fully fulfill its obligations on South Stream.

As for the lover of suing off the oil and gas shelves of Romania, she, like an old woman from a fairy tale, can be at the bottom of the trough: first, it is not known what the court will decide; secondly, it is absurd to consider the fantastic Nabucco project a competitive “South Stream”: even the question is not solved by whose gas to fill the pipes. According to the New York Times, Nabucco can count only for gas supplies from Azerbaijan, and this is no more than 12% of the huge volumes envisaged for the project (which is considered more political than economic: see more on "Military Review"). But at present, real supplies from Russia - of course, without forecasts for South Stream - cover almost a third of the gas demand of the European Union.

The bottom line is: Bulgaria can count on shelf gas - but only after settling the issue of territories with Romania, inspired by recent successes with the International Court of Justice in a dispute with Ukraine. But neither Romania nor the court will not hurry. In the meantime, the court case, Sofia may miss a good chance to get gas at a discount in 11%. How would Prime Minister Borisov, who was at the same time confronting the acute question of a forfeit on nuclear power plants, not be left at the back of the trough with Romania?