November 19, 2021
249
In general, we live in a strange world. There would be a reason to raise a noise - and it will be raised. These are the modern laws of the infosphere.


The main instigators of the noise, oddly enough, are the Americans. There is not a single specialized publication that does not pay attention to the events in Dubai. Well, we are also no exception, we will also express our point of view. 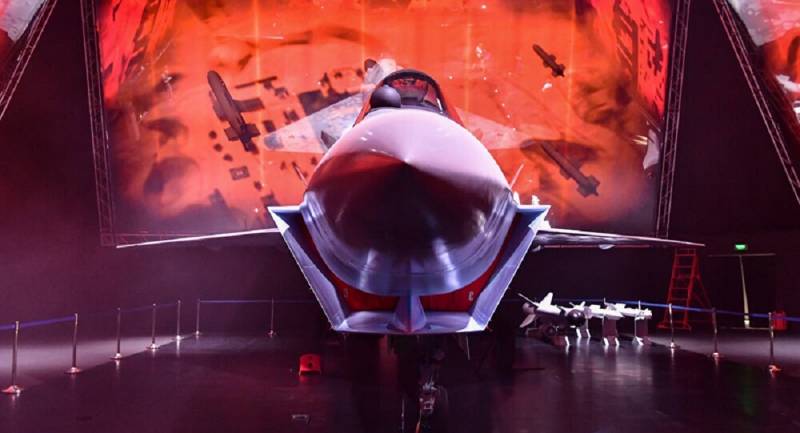 To begin with, I'll take a few quotes from Brad Eastwood, writing editor of 19FortyFive or 1945. A fairly balanced media, without distortions.

“The Su-75 Checkmate, a fifth-generation stealth fighter, is being touted as cheaper than the F-35 Lightning II. The cost of the Su-75 is estimated at about $ 30 million, while the F-35 can be purchased for about $ 80 million. The Russians believe that countries with an average but growing air force, such as the United Arab Emirates, India and Vietnam, will want to buy it. "
Let's look honest and straightforward. There was a model at the air show. No longer made of plywood, most likely sheathed with metal. But - the layout. And we can say that the layout may cost $ 30 million, but we will not. When in 2023, as promised, the Su-75 will fly, then, perhaps, it will be possible to talk.

You can talk about what characteristics can be if ... If the engine is ready, which is "product 30", if then, if this ...

The plane may indeed be able to carry 7 tons of weapons over a distance of 2000 km at a speed of 1,8M. But we will talk about this in full in 2023. When there will be something to talk about. There is no reason yet.

The Americans have a reason. History with the model of the aircraft at the airshow, the American media used it to the fullest in order to advertise its F-35. This is also normal and expected, even though the comparisons are often more than clumsy. After all, when the Su-75 becomes an aircraft, it will belong to a different class.

“The first flight is scheduled for 2023 and full production is scheduled to begin in 2026.
Despite the fact that a delegation of high-ranking officials of the Emirate inspected the plane at the air show in Dubai, there are no orders yet. And the Russians tried their best to make just 12 of their other fifth generation fighters - the Su-57. Thus, production estimates for Mata may be optimistic. "
Here one can agree with the Americans. Indeed, if you remember the hype with the Su-57 and how it all ended, then no one will be surprised if history repeats itself with the Su-75.

In fact, there is nothing special about showing the concept layout. If you don’t shout about the fact that in just 10 years the plane will go to the troops, then everything is within the framework of conventional marketing. At air shows, as well as at car dealerships, many manufacturers show concepts. That is, what can go into series. And they carefully study the reaction of potential buyers. If the buyer is ready to vote with a dollar - green light for the concept in the series. If not, why translate resources?

Of course, in the story of the Su-75, in its possible history, the Su-57 did much harm, around which there was a lot of noise, a lot of comparisons. And how did it end? Nothing. The plane has been mutilated since 2010 and so far there is little sense. The Indians refused to work together because they believe that Russian-developed combat avionics, radars and sensors do not meet the standards of a fifth-generation combat aircraft. Well, there are also complaints about the engine, although it is difficult to say why the AL-41F1S1 did not suit them. The engine is quite good. Indians can do this themselves - good luck.

So all these comparisons of the Su-75 and the F-35 are nonsense. The American plane has one undeniable advantage: it does. He is flying. Released in a series that the Su-57 and Su-75 are unlikely to shine. Yes, a lot of credit goes to American managers, who can easily sell the drug for sharks to the Eskimos, but nevertheless.

Australia, Canada, Denmark, Italy, Netherlands, Norway, Turkey, Great Britain. Japan, South Korea and Belgium are next in line. Israel generally used its own avionics, software and weapon systems, resulting in a candy that makes life difficult for enemies in full.

That is, the F-35 is, it is being developed and modernized. The fact that it will be very difficult to catch up with him is understandable. And here these "ifs" begin. If there are orders for the Su-75, if the plane turns out to be really successful (again, as to judge now, on theoretical calculations), if it flies, if the engine is adjusted, if the Su-57 really costs $ 30 million less, than the F-35 ...

But the main component that calls into question the whole case with the Su-75 is in the Far East. In Komsomolsk-on-Amur.

Over the past week, many information channels have begun to circulate rumors that the assembly of "several samples" or that, as some super-patriotic channels have stated, "the first batch of aircraft" has been started. They refer to the words of the head of the UAC, Yuri Slyusar.

I will allow myself to question what has been said and written, since at KNAAZ itself, perhaps, some preparatory process is underway, but there is no information on this topic yet.

In general, the situation at the manufacturer is very, very alarming. The main question here is: who will assemble these planes? To reduce the number of people reduced, today the need for workers at the enterprise is estimated at 750-1000 people. And the list of vacancies is quite extensive, you can be sure. But experts are in no hurry to plug the gaps, since the level of salaries does not correspond to the present day.

I talked with the residents of Komsomolsk-on-Amur, and you can read a lot on this topic on social networks. Yes, not everyone writes adequately, but I think that in many ways they are right: living in the Far East today is very difficult. And if everyone says out loud that 40-45 thousand is nothing at the current prices, it means that it is so.

For comparison, I looked at vacancies in my region. A milling cutter of the 5th grade costs from 70 thousand, and you can get a job on watch and for 85-90 thousand. A 5th grade boring turner in Voronezh costs 60-70 thousand, in Lipetsk at NLMK - from 90 thousand. But our prices for living are not comparable to the Far East, whatever one may say.

KNAAZ offers 45 thousand. It is understandable why people are not standing in line at the personnel department; it is not clear how this problem will be solved. Lack of working hands will lead to another "shift to the right". And the blame for this will not be the United States or the sanctions, but the greed of the company's management. Good hands are expensive. Today this fact, which only an outright fool will dispute.

And the entire Internet is clogged with complaints against the management of KNAAZ, which regularly deprives workers of earnings under various pretexts. And this is suggestive.

Whose hands will build these planes? The same as the Su-35 and Su-57? Three shifts? Well, we passed it. At KBKhA, after which dozens of rocket engines for space launch vehicles were turned off at the plant. Because everything has ceased to fly.

In general, having shown the model at the exhibition, having amused ourselves with videos and numbers in comparisons, we plunge into the world of everyday working days. Yes, in 2023 we will see how well everything turned out to be thought out and calculated. And let's talk in detail, when the brand new Su-75 takes off and shows everything that it is capable of.

So far, I draw your attention, no one rushed to place orders for the Su-75. All, including the listed "potential buyers", preferred to look from the outside, what would happen in the end. Will it be assembled, how and when it will take off, how it will fly. What will be equipped.

It makes sense. Indeed, those who have money today find it easier to buy the proven F-35. Those who have less money can buy the equally proven, but cheaper Su-35. Who can wait will wait.

The main thing is that no one today will risk the dollar to buy, don’t understand what. A dummy with numbers of promises - it really costs very little. Now, if there was a flying prototype, it would be more significant. But there is no flying prototype, and in the next 3-4 years, in the current situation, there will be no.

If we recall the malicious story with the Su-57, then there were also many sparks and special effects. The sense, however, did not work out at all. The plane has not yet come out as promised, and therefore lost its battle for the Su-57 market with a bang. Let's see how the Su-75 will have it. Two years is not such a period in fact.

Then it will become completely clear and understandable who will be in check and whether checkmate will follow.

The only positive I got out of all this is the commercial. Well done, jokes in every shot, and, I think, even in the West they understood them. You can be glad for the authors.

But the product is not strong for advertising, although it is also a video. The main thing is that in 2023 the plane should really fly and fly beautifully. Then it will be possible to dream of orders.

And if the deadlines again fly, if they "move", or if instead of the declared equipment there is "and this is still flying" and so on (see Su-57), then, of course, there will be no orders. Because all over the world people who make loud statements, make a fuss, and then do not fulfill the declared, are called approximately the same. And they are valued just as low.