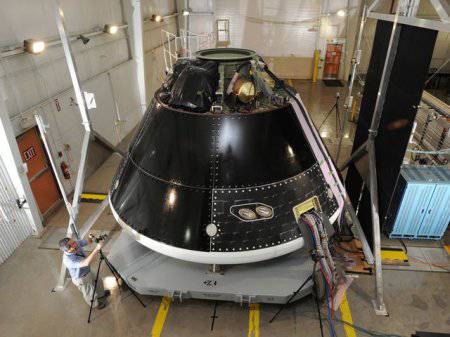 The creation of the new Orion spacecraft, on which the American astronauts should go to Mars in about 20 years, is going according to plan. The first test apparatus will be held in 2014 year. This was announced at a hearing in the US Congress by Assistant Director of NASA Daniel Dumbaker.

According to ITAR-TASS, "Orion", designed for a crew of four, will allow flights to deep space, including the moon, an asteroid, and "ultimately - to Mars."

Commissioned by the US space agency, the ship, in collaboration with its contractors, is being developed by Lockheed Martin.

Speaking at the Senate Committee on Science, Space and Technology, Dumbaker said that the ship will go on its first non-crew test flight in 2014 using the Delta-4 rocket. And three years after that, Orion will be launched for the first time with the help of a new heavy carrier SLS, which is being developed by another giant of the US aerospace industry - the company Boeing. On 2021, NASA has scheduled tests of the ship with the crew aboard.

Lockheed Vice President Cleon Leysfield, who also spoke at the hearing, reported on the successful testing of several key systems of the new ship, aimed, in particular, at ensuring the safety of the crew.

Already passed the test of the emergency launch, navigation and docking systems, as well as parachutes, which are used when landing capsules with astronauts on Earth. The cabin of the ship was delivered to the assembly hangar at the cosmodrome at Cape Canaveral, work continues on the service module.
According to Leisfield, during its first flight in 2014, Orion will move about 6 thousands of kilometers away from Earth - 15 times farther than the International Space Station.

"When returning, it will enter the dense layers of the atmosphere at a speed of almost 32 thousands of kilometers per hour, and its surface temperature will exceed a thousand degrees Celsius. This has not been the case with a single manned ship since the astronauts have flown to the Moon on Apollo,” added the vice president of Lockheed Martin.

In turn, his Boeing colleague Jim Clifton said that the creation of a new heavy SLS launch vehicle is also going according to plan. In its design, both completely new elements will be used (for example, the first step with a diameter of 8,4 meter) and those already used in other projects (RS-25D engines on liquid hydrogen and oxygen, solid fuel boosters from the shuttle system, and the upper stage of the rocket "Delta-4").

SLS will be created in different versions and will be able to launch into space cargo weighing from 70 to 130 tons. According to NASA calculations, one launch would cost about $ 500 million — one and a half times less than each mission of the space shuttle cost.

The new launch vehicle and the Orion spacecraft together will constitute an integrated multifunctional system for manned flights into deep space.
As Dumbaker reported, if necessary, they can also be used to deliver crews and cargo to the ISS. However, this task will mainly be performed by new American ships developed on a commercial basis.

The first of them, Dragon, successfully made a test journey to the station in May and is preparing to set off again for it in October. The agreement between NASA and Space-X, which built the Dragon, provides for 12 expeditions to deliver cargo to the ISS. The contract is estimated at $ 1,6 billion.
Currently, Dragon is the only reusable cargo ship. Its launch is carried out using the Falcon-9 rocket, and an automatic station hand arm helps it to dock with the ISS.

Another company, Orbital Sciences, is also developing a cargo ship and plans to carry out its demonstration flight in the coming winter. Work continues in the United States on the creation of manned spacecraft that will be used on a commercial basis.

In particular, Sierra Nevada intends to build its Dream Chaser, designed for seven people, by 2016 year. Boeing Corporation is also working with partners from Bigelow Aerospace to develop its own version of the spacecraft, called CST-100.

A month ago, NASA announced that it was allocating a total of $ 1,1 billion to these companies for the construction and testing of spacecraft. "We are expanding opportunities for the commercial use of space and at the same time creating completely new conditions for further study of the universe," said Charles Bolden, director of the US space agency. He also stressed that these projects will give the United States thousands of new jobs.