Vectors Dushanbe - Russia will understand everything and forgive everything 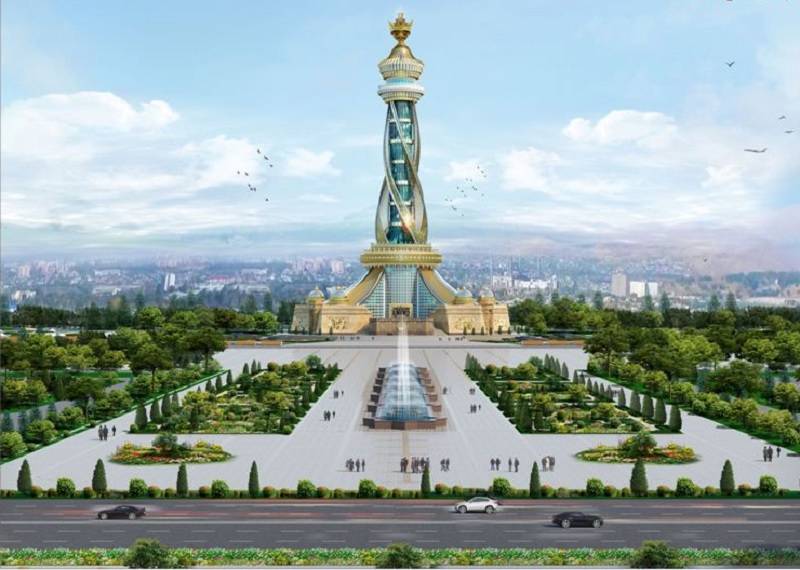 What would it mean?

Against the background of the growing concern of the leadership of Tajikistan about the possibility of a Taliban "invasion" of this country, Dushanbe is initiating a more active participation of the CSTO and, above all, Russia in patrolling the southern borders of the country. Note that the Tajik side does not apply to the Ukrainian authorities with such requests.

On the other hand, Dushanbe, not at all hiding, at the same time actively develops relations not only with Ukraine, but also with NATO member Turkey. Moreover, in the latter case, even an agreement on military cooperation and on the abolition of the visa regime is implied.

Despite the fact that Ankara's position regarding the Russian Crimea and Ukraine's relations with the Russian Federation, we recall, remains unequivocally anti-Russian. This is evidenced, for example, by the information of the Tajik news agency Avesta.Tj dated October 13.10.2021, XNUMX:

“The Chairman of the Majlisi Namoyandagon (Parliament of Tajikistan) Mahmadtoir Zokirzoda, within the framework of his working visit to Turkey, met with the Minister of Foreign Affairs of the Republic of Turkey Mevlut Cavusoglu. 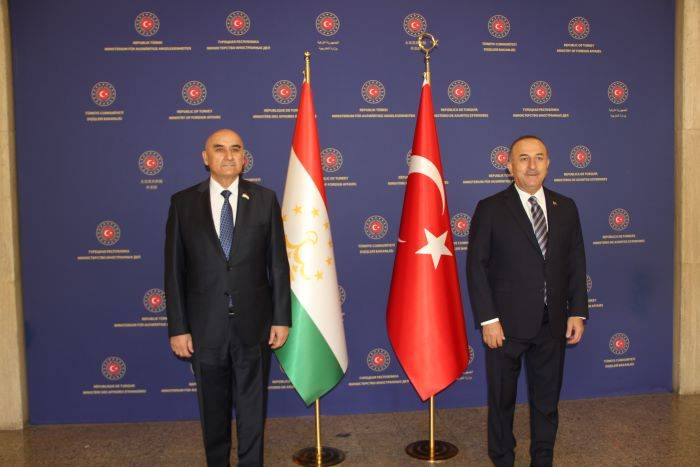 According to the interlocutors, some draft agreements under consideration may serve to intensify Tajik-Turkish relations. Among them - an agreement between the governments of Tajikistan and Turkey on military cooperation, an intergovernmental memorandum on cooperation in the field of free economic zones, an agreement between the governments of the two countries on the withdrawal of visas ”.
The details of the agreement on military cooperation are still not officially disclosed by both sides.

But it is still unclear how this agreement fits into the CSTO system, in which Tajikistan initially participates?

And which his authorities are urging every day to defend the vast - almost 1 km - Tajik-Afghan border?

Meanwhile, on March 28-29, the head of Tajikistan E. Rahmon paid an official visit to Ankara. There is no detailed official information about the documents signed there (or about their projects), just as there was no press conference following these negotiations. But upon their completion, the same Mevlut Cavusoglu laconically and clearly stated to the media: 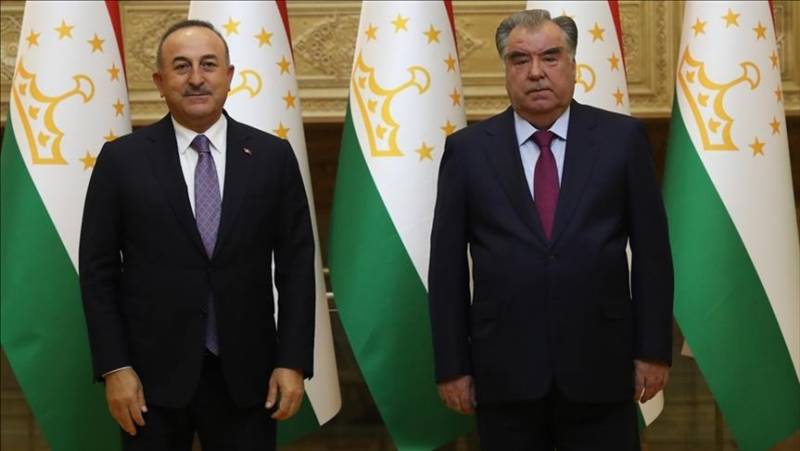 The brisk Cavusoglu managed to talk to Tajik President Emomali Rahmon long ago.

It is noteworthy that the aforementioned events in Turkish-Tajik relations coincided in time with the Ukrainian "accents" of Dushanbe's foreign policy. For example, here is the message of the Tajik news agency Avesta.Tj dated 15.10.2021/XNUMX/XNUMX:

“On October 14, the Sheraton Hotel in Dushanbe celebrated the 30th anniversary of Ukraine's independence, as well as the Day of Defenders and Defenders of Ukraine. The event was attended by representatives of ... a number of ministries and departments.
Ukraine celebrates its "Independence Day" on August 24. The situation with the COVID-19 pandemic did not allow us to mark this event in a timely manner. And we decided to celebrate this holiday today ”, - emphasized the Ambassador of Ukraine to Tajikistan Vasily Servatyuk. According to the ambassador, another holiday is also celebrated - the Day of Defenders and Defenders of Ukraine.
In honor of this Day, the Embassy of Ukraine organized an exhibition of 12 paintings by the Lithuanian artist Beata Kurkul, dedicated to the feat of the Ukrainian Armed Forces in the war. " This refers to the war in the east of Ukraine.
The epilogue of the report states that

“Such events have not been held in Tajikistan for a long time”, which is why “we and Tajikistan have lost a lot. Such exhibitions will help us to get closer and further develop our friendly relations ”,
- noted Vasily Servatyuk.

Developing the theme of bilateral friendship, Tajik Ambassador to Ukraine Davlatali Nazrizoda told Asia-Plus on October 26 that contacts within the framework of the intergovernmental commission - its Ukrainian co-chairman Igor Petrashko recently visited Dushanbe at a meeting of this commission - have been going on for many years.

At the same time, “in 2020, a Group of Friendship and Cooperation between the parliamentarians of the two countries was created in Dushanbe. The same group was created in January 2021 in the Verkhovna Rada of Ukraine ”.

Let us add here, by the way, that the anti-Russian theme was officially voiced by the Ukrainian embassy in Dushanbe and earlier, even before the complete victory of the Taliban in Afghanistan. This was the case, for example, on January 22, 2019 at an event in this embassy in connection with the 100th anniversary of the conciliarity of Ukraine.

According to the embassy itself, "Special attention in the speech of V. V. Semenov, Charge d'Affaires of Ukraine in Tajikistan, was paid to the current political and military-political situation in Ukraine in the context of the ongoing Russian aggression."

Do not speak to me for Crimea

By the way, Tajikistan, like most other "allies" of Russia, to this day does not recognize the Russian status of Crimea either. This was actually confirmed during the aforementioned negotiations with the Ukrainian side and the joint celebration in Dushanbe of the 30th anniversary of Ukraine's independence. 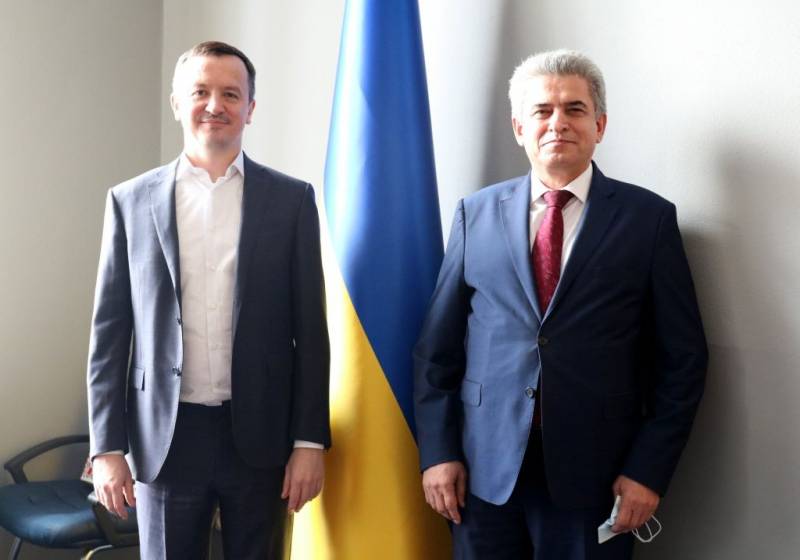 Ex-consul in St. Petersburg, Tajik Ambassador to Ukraine Davlatali Nazrizoda with Minister of Economic Development, Trade and Agriculture of Ukraine Igor Petrashko, Dushanbe, October 26, 2021
According to Andrey Kazantsev, Director of the Analytical Center of the Institute for International Studies of the Moscow State Institute of International Relations of the Ministry of Foreign Affairs of the Russian Federation,

“It is customary for us to regard Tajikistan as an ally: this is so in fact, for many reasons. But this country, dependent on foreign aid, is pursuing a multi-vector policy. And, being a partner of Russia, he tries not to spoil relations with the West, including the United States. "
In turn, the Tajik political scientist Rustam Gulov notes the ambiguity of Dushanbe's position on Crimea, urging it to be preserved:

“Can we go beyond the position of our“ older brother ”who tirelessly calls the new leadership of Ukraine“ nationalists ”,“ fascists ”,“ militants ”? But, at least on the issue of Abkhazia and South Ossetia, we kept silent. Maybe we will be able to keep silent this time too. "
Still, it is still difficult to explain why exactly the second half of October 2021 saw such a "breakthrough", or rather a "breakthrough" in relations between Dushanbe with Turkey and Ukraine. But, in any case, the synchronicity of such a "leap" is characteristic.

Most likely, this is due to the uncertainty of the ruling regime in Dushanbe in its stability against the background of the victory of the Taliban in Afghanistan and even despite the military-political support of the "Rakhmonov" regime from Moscow.

Therefore, it is necessary to enlist in advance, using the conventional thesis about the Taliban threat, the support of Ankara and Kiev. Moreover, it is obvious that to the detriment of the interests of Russia and the CSTO.

As for the role of the "Taliban threat" for Dushanbe, the assessment of the Carnegie Moscow Center on October 21, 2021 is noteworthy.

"... Recently, President Rahmon has returned to the topic of the misfortunes of Afghanistan under the Taliban in almost every speech - even those that are not related to foreign policy."
The regime in Dushanbe is indeed "going through hard times due to economic difficulties and general fatigue from its almost 30-year rule." Therefore, "playing as a radical nationalist and defender against the" Taliban threat "remains the only way for Rahmon to maintain his popularity."
What is the reason for such a demonstrative activity of Dushanbe in relations with political opponents of Russia?

Why is Tajikistan signaling to Russia's opponents that Moscow, even together with the CSTO, is now not the only military-political priority of the leadership of this country?

There is almost no doubt that the whole point is in the full confidence of official Dushanbe that Moscow is interested in the current Tajik regime. Among other things - due to the massive "export" to the Russian Federation of cheap labor, which is more and more profitable for Russian business.