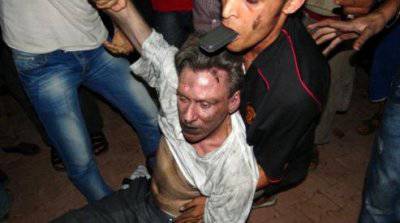 Strange deja vu must have been experienced by those people who saw the image of the American ambassador to Libya, Chris Stevens, which had been replicated by AFP, which was being dragged away by a crowd of people. As recently as last October, the whole world was discussing amazingly similar shots made in Libya. Only the protagonist was the overthrown Libyan leader Muammar Gaddafi. Is bitter irony stories still has a place to be. So then do not believe in fatalism and the irony of fate ...

11 September 2012, the American ambassador to Libya Stevens arrived in the so-called eastern capital of new Libya - the city of Benghazi. His arrival from the diplomatic mission of the United States, located in Tripoli, was timed to the opening of the cultural center. However, instead of the cultural action in the city, a real bloody drama broke out, the causes of which are still the subject of wide discussion.

The original version, which is considered official, looks like this. In Benghazi, thousands of people took to the streets for a rally, which was organized so that local Muslims expressed their indignation at the recently released film by the American director Sam Besil “The Innocence of Muslims” or “Mohammed, the Prophet of Muslims”. The trailer for this film can now be found on the vast expanses of the Internet. In his film, Basil decided to show the Prophet Muhammad the most real asocial type, which leads in fact an immoral way of life, is gay and calls on his supporters to violence. It is reported that one of the co-authors of this clearly scandalous film is the equally scandalous pastor Terry Jones, who once had time to cause resentment of Muslims to himself by having publicly burned the Quran. The pastor himself says that the film was shot not at all to discredit Muslims, but to show the “destructiveness” of their religion ... Director Basil said that the film was shot with the money of a certain Jewish community in the USA and shows that “Muslim faith is a cancer "...

For obvious reasons, a new insulting attack on Islam by certain US citizens caused a real storm of indignation throughout the Muslim world. Benghazi was among those cities where it was decided to hold a speech against the release of the movie “The Innocence of Muslims” in the rental and in general against the very idea of ​​attacking the Islamic faith.

The initial information from Benghazi was reduced to the fact that the crowd, infuriated after the information processing, literally rushed to the American consulate, where by tragic accident was Ambassador Chris Stevens. What exactly happened inside the building of the American diplomatic mission in Benghazi is not reported, but the victim of this entire action was the American ambassador, who died on the way to one of the local hospitals. According to the Associated Press, the cause of death was severe asphyxia. Dr. Abu Zeid said that this reason may be related to carbon monoxide poisoning.
If we consider all the events described in Benghazi, it turns out that the ambassador was the victim of the crowd by pure chance. This is the version that the American authorities put forward. They say that the “peaceful” Libyans, who had finally ’democratised themselves definitively since October of last year, didn’t intend to kill Chris Stevens at all. They say that this is all a fatal accident, connected exclusively with the protests of civilians, who “made some little noise”, as a result of which Mr. Stevens became an accidental victim.

It is obvious that such official explanations only fueled interest in the tragedy, especially from American citizens from among Republican supporters. The pro-republican press in the United States described the tragedy in Benghazi as a complete failure of the policy of the current American administration.

After a detailed study of personnel with the very "peaceful" Islamic demonstrations in the second most significant Libyan city, it turned out that among the "peaceful" Libyans there were suspiciously many people in whose hands were machine guns and grenade launchers. This makes it possible to say that the attack on the American diplomatic mission in Benghazi was fairly well planned. Obviously, the demonstration itself for certain forces served only as a background. The background on which the main action was unfolding was the murder of an American diplomat. And after all, the militants have thought everything over to the smallest detail: the organization of the action against the film directed by Besil is one, the indignant crowd is two, the arrival of the US ambassador to Benghazi is three. Indeed, everything looks like a fatal accident, but for coincidence there are too many coincidences.

It should be noted that Chris Stevens is a man who at the time of the start of the revolution in Libya was the main functionary of the United States in his plans to connect the American authorities with the armed opposition. In fact, Stevens can be considered a key figure who provided direct assistance to armed anti-government forces in Libya to overthrow Muammar Gaddafi. The opposition, as is known, overthrew Gaddafi (not without the help of the United States). Frames with a bloody colonel, whom a crowd raging with delight drags somewhere along the streets of the city, saw billions of people around the world. But here - they dealt with Gaddafi ... American democracy in Libya triumphed ... Freedom of speech, human rights and everything else ... And again we see a person on the screens with blood on the head and lips that Libyans are dragging somewhere ... Only this person - “The winner”, the ideological inspirer of the Libyan people, who aimed this people to fight the “bloody tyrant” Gaddafi. As the saying goes, "and everyone will be rewarded according to his deeds ..." Yes, not to subtract, not to add.

Apparently, the American political elites who started the car of regional revolutions did not know well how these revolutions usually ended. If they sat down at least for school textbooks on the history of world revolutions, they would see that very often a revolution is inclined to grind not only those against whom it was organized, but then also those who organized it. The case of US ambassador Chris Stevens is a good example.

Washington, realizing that it had fallen into a rather ambiguous position, began to look for ways to solve the problem that had been formed. On the one hand, the Obama administration cannot abandon "democratic achievements" in Libya, calling the victorious terrorists, but on the other hand, it (the administration) will have to demonstrate willingness to defend "the democratic values ​​won by the Libyan people." Apparently, two American warships (destroyers McFaul and Laboon), fifty Marines from the FAST unit (special forces fighters designed to protect American diplomatic missions), unmanned aerial vehicles and the FBI investigation team were sent to protect these “values” in Benghazi. FBI drones and agents, according to Washington’s plan, will have to identify the organizers of the action and the direct killers of Christopher Stevens ... Now the announcement that the terrorists who attacked the American consulate in Benghazi were found is a matter of honor for the current US President Obama.

By the way, it will not be surprising if in the near future we are presented with a photo of a certain terrorist who was accompanied by the text that it was he who 11 of September 2012 had killed the American ambassador to Libya, strangling him with carbon monoxide. And now, they say, this outcast, whom the Libyan democratic people literally cursed for killing the ambassador of a friendly state, was destroyed by American marines in his closet, well, or in the bedroom ... Then the body of this man will be dumped into the sea. And again deja vu ...

It is obvious that after this, the current American president may again crawl up the rating. But this growth is really very necessary for Obama today ... So, both Republicans and Democrats can play Ambassador Stevens’s card in the United States today.

And the closer the elections are in the most democratic country in the world, the more terrible it becomes from such a democracy ...

PS While this material was being prepared, information was received that the wave of anti-American actions literally overwhelmed the Muslim world. They attacked not only the diplomatic mission in Libya, but also the US embassies in Egypt and Yemen. In the city of Sana'a (Yemen), at least one person was killed as a result of pogroms, several were seriously injured. Around the US Embassy building burned cars of American diplomats. By the way, Yemen is another country of the "victorious" democracy, to which the Americans put their hand.

The grindstones of the Arab revolutions spun in full swing, but in the opposite direction.