Eurocopter handed over to Germany the first modernized helicopter CH-53GA 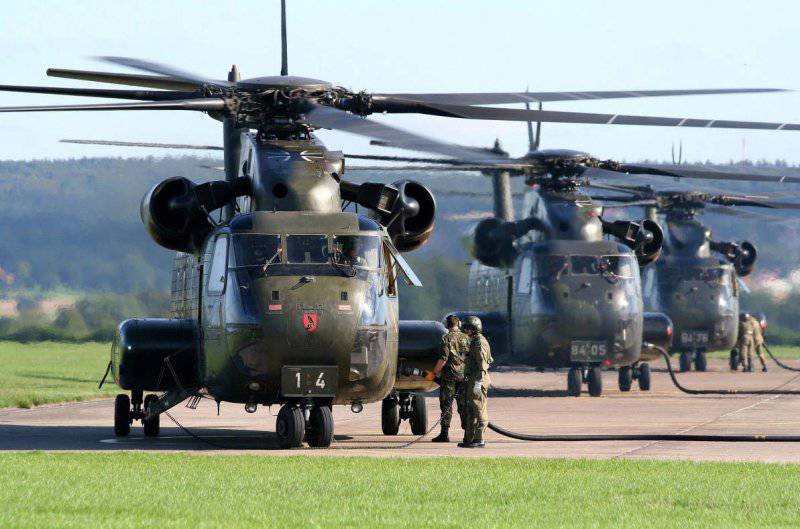 During the exhibition, the Eurocopter ILA-2012 officially handed over the first modernized medium transport helicopter CH-53GA to the German Armed Forces.

The contract provides for the modification of structural elements and some helicopter assemblies, which will extend their lifespan for 4000 flight hours (from 6000 to 10000 hours). In addition, the entire electrical system will be completely replaced.

According to Flight International, with reference to Eurocopter’s program manager Stefan Emig, the company conducted all the necessary tests and certification using two prototypes. By the end of September, it is planned to complete additional certification of helicopters.

In addition to the machine presented on the ILA-2012, three modified CH-53GA helicopters from July 2012 have been used for crew training. By the end of the year it is planned to transfer four more cars to the German Armed Forces.

Germany intends to send upgraded CH-53GA helicopters to Afghanistan by the end of next year.

CH-53G helicopters are in service for more than 35 years and in the medium term will remain the main platform for operations to deploy units of the Armed Forces of Germany and the transport of goods in international missions. The helicopter can be used in adverse weather conditions.

At the plant of the concern Fokker (VFW-Fokker) in Germany from 1971 to 1975. The X-NUMX CH-110G helicopters, which are a version of the C-Steel CH-53D heavy helicopter, were built.

According to existing plans, the German Armed Forces will rely on the 66 of the 84 currently available CH-53, including the 20 machines in the GS version and the 6 in the GE version.