The attack on the Chechen parliament is a threat to the Kremlin protege ("Christian Science Monitor", USA) 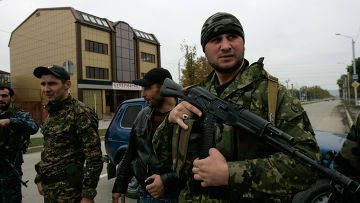 The militants ’major attack on the Chechen parliament raises doubts about the boastful statements by the Kremlin’s appointee Ramzan Kadyrov that he had established peace in Chechnya.


A brutal attack in broad daylight on the Chechen parliament not only led to the death of at least seven people. It refuted the Kremlin’s claims that peace and order had been restored in this war-torn republic under the effective leadership of strong pro-Moscow leader Ramzan Kadyrov.

Russian news agencies reported that on Tuesday morning, from three to six militants entered the parliament building in Grozny, who put their car among the cars of deputies who arrived at work. One of the attackers blew himself up near the entrance to the building, and the rest penetrated inside, where they managed to kill at least two employees of the Chechen security service and an assistant deputy. Responsibility for the attack did not assume yet no one group.

State news agency RIA News reported that part of the attackers reached the fourth floor of parliament, before they were "liquidated" by the security forces. The attack took place just during the official visit to Chechnya of the Russian Interior Minister Rashid Nurgaliyev, who addressed the legislators with a speech shortly after the completion of the operation to destroy the attackers.

"We will not allow anyone to come to us with a sword," Nurgaliyev said to shocked Chechen deputies, "they must know that this sword will die."

Just two months ago, a group of suicide bombers carried out an attack on the family village of Kadyrova Tsentoroy, killing 10 people. This attack was a grim reminder to Kadyrov that his frequent statements about the liquidation of the Islamist and separatist underground in Chechnya are premature.

“This shows that resistance continues, that it is increasing,” says Alexey Malashenko from the Moscow Carnegie Center, “Kadyrov insists that he controls the situation, that he has restored stability and security, but these events have demonstrated the absurdity of such statements.”

From nationalism to jihad

For the Kremlin, which has relied on Kadyrov and does not seem to have prepared any reserve plan for establishing peace in Chechnya, this is a very serious dilemma. Over the past twenty years, Russia has twice waged cruel wars in Chechnya in order to suppress separatist resistance, which cost it approximately 200 000 lives.

Although the Russian security forces have largely successfully eliminated the old generation of Chechen separatist militants, a new pleiad of young rebels, for whom the main motive for the struggle is no longer Chechen nationalism, but the ideas of pan-Islamism, has expanded their ranks today. The rebel movement crossed the borders of Chechnya and embraced a number of neighboring, mostly Muslim republics.

However, Kadyrov, who was put in charge of the republic after his father died in the 2004 year of the stadium as a result of a spectacular explosion, managed to “chechenize” the conflict. He has achieved some success in restoring the war-torn Chechen cities (for Moscow’s money), as well as in reconciling the population, using the techniques of police terror and selective amnesty for former militants. But experts note that he had excessive ambitions, and he became more of a burden than an assistant for his Kremlin sponsors.

“Last year, Kadyrov claimed that Chechnya is the best example for all the republics of the region,” says Alexei Mukhin, director of the independent Moscow Center for Political Information, “he began calling himself the 'young father of his nation' and began to brag to the Kremlin that he controls every square centimeter of the Chechen territory. [Former President and current Prime Minister Vladimir] Putin, who was Kadyrov’s chief patron, is beginning to tire of him. "

There are also signs that the export of terrorism from the volatile North Caucasus to the central regions of Russia may resume. Over the past decade, more than a thousand Russians have died as a result of the terrorist attacks there. In March, there was a double terrorist attack in the Moscow metro that killed at least forty people, and in May, terrorists killed six people near the theater building in the Russian city of Stavropol.

Little is known about the details of life in Chechnya under Kadyrov, since a large number of journalists and human rights activists who tried to work in the republic were killed there. This shows how great the threat is to those who ask too many questions. Oleg Orlov, chairman of the largest human rights organization in Russia, Memorial, calls Chechnya a "totalitarian black hole", where even the most basic human rights that Russians in other regions enjoy are absent.

“The methods used to control the situation in Chechnya are unacceptable for many people,” Orlov says, “the Chechen population [under Kadyrov] has no legitimate channels to express discontent. There is no free press, no free elections, and even discussion politicians are life threatening. This is a totalitarian regime in which people have to talk, act, and even dress like the authorities order them. The only possible way to express their displeasure is to join the ranks of underground resistance, and that would be of course, fueling terrorism. "

But despite increasingly numerous evidences that Kadyrov’s main task - to stabilize the situation in Chechnya - has not been fulfilled, experts say that the Kremlin is unlikely to send him to resign.

“Even if the Russian authorities wanted change, there is no longer any alternative,” says Alexei Makarkin, deputy director of the independent Moscow Center for Political Technologies, “there is no one left in Chechnya, only Kadyrov’s group. The Kremlin created it, relied on it, and now has hostage. "