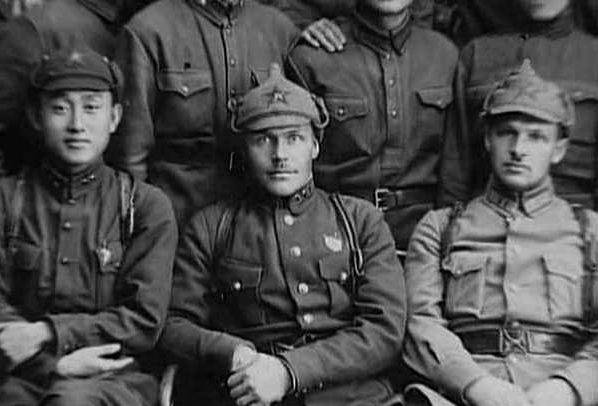 I’ll make a reservation right away, if it were different - and it is possible that Dmitry Grigorievich would have ended the war in 1945, commanding tank army or, with luck, even the front, would have died in the 60s and 70s in honor and entwined with the laurels of the winner, and they would also write about him as about Chuikov or Rybalko.


But история He does not know the subjunctive mood, and our hero ended up where he found himself: in that very terrible June 1941, he served as commander of the Western Special Military District. But the road that brought the rather inexperienced commander to such a height was interesting.

A peasant son from a wealthy family in the Kostroma province (a two-year school and exams for the fourth grade of a gymnasium were not cheap), at the age of 17 he went to the front as a volunteer. He rose to the rank of non-commissioned officer, was captured on the Stokhod River, where he remained until 1919. Upon returning home, he worked for his father, then as an official, and only by the end of the year was mobilized in the Red Army.

A couple of conclusions suggest themselves at once: a smart and ambitious person, he did not hold on to the village, on the contrary, he was eager to get into the city with all his might, a war in this capacity is also a way, because from a free operator to an officer in wartime there is only one step. He was also not an ideological communist, he did not volunteer in the Red Army, although he had considerable military experience.

Although it was the Red Army, in need of literate people who were not associated with the old regime, that gave him everything. There he joined the RCP (b), there he received a military education, served in administrative positions and in just two years became a regiment commander in the cavalry.

Pavlov's combat experience during the Civil War is specific - Turkestan. The Basmachi were, of course, a fanatical and strong enemy, but that RIA, that the Red Army always beat the sons of the steppes and deserts, even with a ratio of one to ten not in their favor. Technique and tactics are primary, and personal courage in the era of the industrial revolution is secondary.

In 1925, a perspective shot was sent to the Frunze Academy. Promising, of course, not in terms of awards and experience, but in origin and education. We had few literate peasant sons who had a non-commissioned school and four grades of gymnasium behind them, plus some sort of combat experience. In this, Pavlov's career is very similar to that of Zhukov and many others: the former officers were not trusted and they were being prepared to replace them.

Further - Spain, where they were selected, young (Pavlov - 40 years old) and promising. He showed himself there well, as the commander of a tank regiment and brigade, and the result: from July 1937 Pavlov - head of the armored department of the Red Army.

His participation in Khalkhin Gol and the Winter War is purely decorative - he did not lead troops into battle, and in the summer of 1940, a year before the war, Pavlov took over the Western Special Military District (ZOVO), which he led to the disaster.

What's wrong with his career?

Pavlov commanded neither a platoon, nor a company, nor a battalion, he immediately received a regiment. Moreover, the regiment is cavalry, it has its own specifics, especially during the Civil War, in Turkestan, where there was no front, but there was an anti-partisan operation.

Further - the mechanized brigade, the case for the Red Army is new and incomprehensible. In theory, everyone understood what tank troops were and how to use them, but in practice ... In reality, even the Germans in Poland were mistaken at first and took a long time to select the optimal staff for a tank division.

After the brigade commander - an administrative position, the chief tanker was engaged in training, mastering and choosing equipment, generalizing combat experience, but did not command real troops, and then - the district. District through the steps of division commander, corps commander and army commander. The divisional commander would have come out of him, probably, good, and the corps commander too, but he had four armies, mechanized corps, rifle corps, airborne corps and so on.

And the weakness of the staff, so young and early in the Red Army was the sea. The Air Force and tank troops were created practically from scratch in the 30s, and in the traditional branches of the army, old personnel were removed with might and main, and new ones ... One part burned down in 1937, the other had little experience.

To put it bluntly: professional cyclists were entrusted with KAMAZ at the Paris-Dakar rally.

There were no others, and this, on the one hand, justifies Pavlova, but on the other, it is the other way around. For a career in the Stalinist USSR, they were not forced, hardly an evil Chekist with a revolutionary revolver stood behind Pavlov's back, and even Commissar Mehlis hardly. Actually, Pavlov combined two positions for a long time - commander and commissar.

The language of law

And if the language of law:

193_17. a) Abuse of power, excess of power, inaction of power, as well as negligent attitude towards the service of a person in command of the Workers 'and Peasants' Red Army, if these acts were committed systematically, or for selfish reasons or other personal interest, as well as if they had as their consequence the disorganization of those entrusted forces, or the case entrusted to him, or the disclosure of military secrets, or other grave consequences, or even if they did not have the indicated consequences, but certainly could have them, or were committed in wartime, or in a combat situation, entail -
imprisonment for a term of not less than six months.
b) The same acts, in the presence of especially aggravating circumstances, entail -
the highest measure of social protection.
The inaction of the authorities and disorganization are evident. And also there is:

193_20. a) surrender to the enemy by the head of the military forces entrusted to him, abandonment to the enemy, destruction or rendering into disrepair by the head of the fortifications, warships, military aircraft, artillery, military depots and other means of warfare, as well as the failure of the head to take appropriate measures to destroy or disabling the listed means of warfare, when they are in immediate danger of being captured by the enemy and all methods have already been used to preserve them, if the actions specified in this article are committed in order to assist the enemy, entail - the highest measure of social protection with confiscation of property.
Abandoned mountains of equipment, captured soldiers and fortifications. Moreover, there can be no question of a scapegoat - many were tried in 1941, but not all.

And the problem was not defeat; defeat was inevitable. The fact is that from the second day of the war the front commander lost control of the troops and did not understand the situation (from the word in general), giving inadequate orders.

As, for example, the impact of the 6th mechanized corps of Khatskilevich into the void without air defense and air cover. Either the non-withdrawal of troops from the Brest citadel, or the concentration along the border of a double set of aircraft, or ... Pavlov had a lot of these “ors”.

But, let's say, this did not work out to the north:

On June 18, 1941, parts of the corps were raised on alert and withdrawn to the concentration areas, thus, by June 22, 1941, the 2nd Panzer Division was in the area of ​​the Gaizhuny station, Rukle, the 5th Panzer Division was concentrated several kilometers south of Alytus, and 84 -I motorized division in the woods near Kaishadoris.
So Kuznetsov remained the commander of the army.

The rest is politics from Nikita Sergeevich to the current decommunization.

If we consider the issue from the legal and factual point of view, on what the court was based when it pronounced the verdict, then the grounds for conviction were obvious. Why did I, occupying such a post where I could influence one way or the other in deciding important issues, agreed to their rehabilitation? I agreed because it was not Pavlov who was to blame at the core, but Stalin.
Stalin is to blame, and to the point, he forced poor Pavlov to command the district, forced him not to be able to control the troops and not to control inexperienced subordinates.

Another analogy is that a maniac killed hundreds of people, but he must be justified, because the state is guilty at the core: the school brought up the wrong way, and they did not see it in time.

Stupidity, but about Pavlov, everyone perceives it as the norm.

And so he is a victim, of course, that of an era when you needed a lot and at once, and there was nothing that his career ambitions, when the peasant's son himself at some point believed that he could do everything and knew more than others.

And behind this tragedy of one little man, terrible figures: 625 thousand servicemen entered the battle, 417 thousand killed and wounded, the front was defeated, hundreds of thousands of lives were lost, the Germans advanced 600 kilometers.

And who will be responsible for them?

After all, you can't blame everything on Stalin? And Pavlov was rehabilitated, with whom it does not happen ...