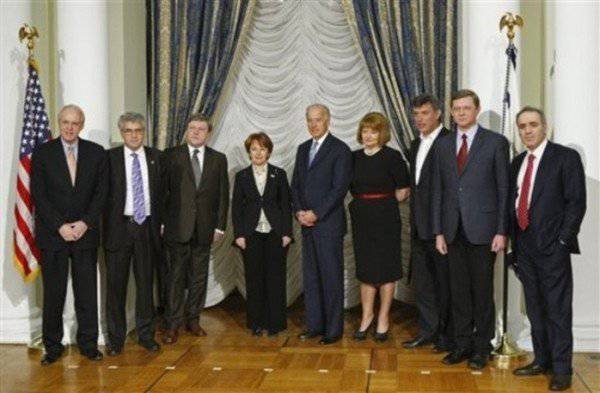 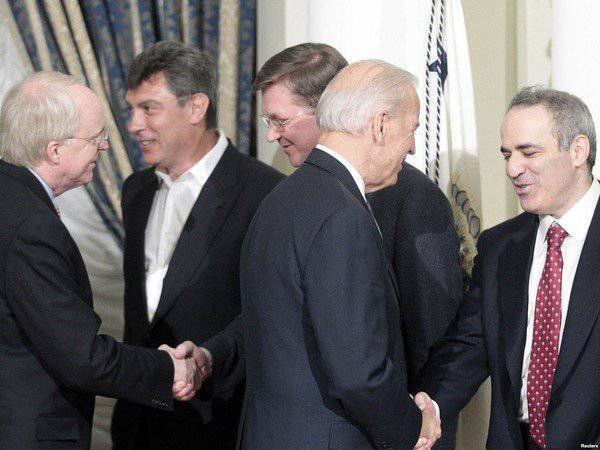 This technology has received overseas the name "victory without war" ...

Several years ago, at a meeting in Washington, a well-known American figure in the presence of the author of these lines nostalgically shared his memories.

In 1980, he received a delegation from the Soviet Union, in which Gavriil Popov was. Soviet guests went to the store. Popov wanted to buy some thing, but he lacked a few dollars. The narrator told him this money otklyunyavil (without demanding return), and Popov was so glad, so happy and so grateful! "And then I told myself," continued the Washington figure, "if we had distributed ten thousand dollars like this, the Soviet Union would no longer exist."
In fact, it still took more than $ 10. But it did not take an open war. The Soviet Union was not destroyed tanks and enemy airplanes, and quiet glanders: systematic subversive work, psychological impact on leadership, buying loyalty of power circles and fooling the masses with false promises and propaganda. In Washington, this is called "victory without war."

HOW ARE PREPARED SPLITS

It would seem that they destroyed the USSR - they achieved what 70 longed for years. But no - the same thing continues today. Russia is still too big and rebellious. Until they break it into an 4 piece, as Sakharov suggested, and even better at 50, as suggested by the leaders of the Interregional Deputy Group at one time, or not put someone like Saakashvili at the head (Navalny is an excellent material for modeling dictator!) Washington will not calm down.

For more than twenty years, American and Western European governments, private foundations and large companies have built up a vast multi-level subversive infrastructure in Russia. Painstaking work! We need to recruit personnel, train them, rebuild organizations, reach out to various sectors of society, establish links between these organizations, conduct thousands of trainings, constantly master new information technologies, create groups in different Facebookbooks, promote their people to the authorities from urban to federal and etc. So that the activity does not look political, it is necessary to finance everything in a “carpet” way - children, pregnant women, the unemployed and migrants, treatment of tuberculosis, fire fighting and forest protection - there is enough forest protection in our country. The preparatory phase becomes active when Washington feels that the situation is ripe. Elections provide a very convenient reason for organizing "spontaneous" protests.
Injections into the Russian society were made billions. Over the past 15 years, the United States Agency for International Development (USAID) alone has “invested more than 2,6 billion dollars in Russia”. But this is a meager amount compared to the cost of the war, if it had to be waged against Russia - even the United States would spend over a trillion dollars on Afghanistan and Iraq. And how many good American guys would die at the hands of Russian barbarians!

Much cheaper and smarter to fight against Russia with the Russian hands. The US has Nemtsov, Ryzhkov, Navalny, Kasyanov, Kasparov, and the list goes on. From Washington, they pour water over the entire battery together with their networks from the shower and see who will shoot louder - then they will bet on it. For now, the internal competition between the “oppositionists” is very useful for the Washington business: everyone is zealous for choosing him. Glory and power are attached to money - a super stimulus for the ego of our non-systemic oppositionists.

Charity in the headquarters

Who does the allocation of grants from the American side? Charity, (not) surprisingly, in the biographies of these people does not appear. Charles North, director of USAID in Moscow, is a graduate of the National Military University with a master’s degree in national security strategy. The recent deputy head of USAID for Europe and Eurasia, Douglas Menarchik served 26 for years in the US Air Force, was an instructor at the Air Force Special Operations School (he taught counterterrorism, counterinsurgency operations and crisis management), was in charge of strategic planning for countering terrorism in the Pentagon.

The boards of trustees of Western and Russian NGOs that have been cloned by them abound in members of intelligence communities. The Council of the Moscow School of Political Studies is chaired by Sir Rodrick Braithwaite - although he is more accustomed to chairing the United Intelligence Committee of Great Britain. Moreover, this fact is absent in the official biography of the venerable Sir in the Russian version of the site of this “school” (compare it with his biography in the English Wikipedia). Among the members of the Board of Trustees of the Eurasia Foundation is Fiona Hill, from 2006 to 2009, she was responsible for Russia and Eurasia at the National Intelligence Council, which coordinates all US intelligence agencies. And of course, oil interests in American “non-governmental organizations” cannot be avoided in any way: the main place of work of Yana Kalitsky, Chairman of the Board of Trustees of the Eurasia Foundation, is Chevron Corporation, where, as an executive adviser on international strategy, he is engaged in “developing international business, negotiations and interaction with the authorities. "

Some forces in Europe are in a hurry to serve America. 9 - 10 November The 2011 of the Year in Helsinki brought together the Alliance of Liberals and Democrats for Europe from the European Parliament and Mikhail Kasyanov and his comrades. Together, they called on Europe "to refuse to recognize the results of the upcoming Russian elections as legitimate" - a month before they were held! The capital of Finland was not chosen by chance: the conference was held under the name “2.0 Helsinki” - as the organizers explain, a symbolic reminder of the 1975 Helsinki Accords of the year. We explain: the final act of these agreements has transferred human rights from the sphere of good wishes to the sphere of rigid real politics. If before that, the CIA was engaged in “promoting democratic values” - and this was called subversive activity, the Helsinki Accords allowed to do it openly, calling it “democratization”.
There is criticism aimed at improving affairs in the state — this is normal criticism that should be present in any country. And there is a criticism aimed at the destruction of statehood, and it is precisely such criticism that today's “Western dissidence” deals with - as Vladimir Bukovsky called himself and his associates. Today, like 20 - 30 years ago, we are witnessing the same efforts of the West to destroy our statehood. But this time we can not go on about a handful of purchased fringe. We have nowhere to disintegrate - the next “victory without war” of Washington will bring Russia to the borders of the Moscow kingdom of the XVI century.

What do you think?