The power struggle continues. "Siloviki" while ahead of the "liberals" 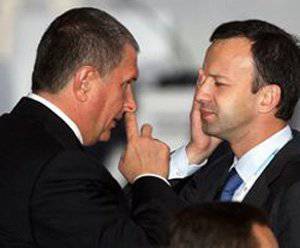 The tacit opposition of the conditional power and liberal bloc in power continues and becomes like a protracted series. The last move of the liberals in the form of an open letter to Dvorkovich to Putin did not bring the desired results - the president did not even read it. But the response to this demonstrative gesture followed immediately.

The other day, V.Putin introduced new members to the presidential commission on the fuel and energy complex by decree. They were the head of the Ministry of Internal Affairs V.Kolokoltsev, the head of the SVR M.Fradkov, the deputy head of the foreign ministry G.Karasin, the first deputy chairman of the State Duma Committee on property issues, Yu.Petrov (former member of the board of directors of Rosneft OJSC), the chairman of the committee of the Federation Council on agricultural and food policy and nature management G.Gorbunov and rector of the University of Mines V.Litvinenko.

But the former head of the USC R.Trotsenko, on the contrary, was expelled from the commission by presidential decree.

Such castling, carried out by V.Putin, can be interpreted as a response to the increased pressure of the liberal team. The presidential commission was replenished with representatives of the power block. The resignation of Trotsenko is not out of this logic - he had previously lost his post as head of the USC because of the protracted conflict with the Ministry of Defense. Trotsenko, as an experienced marketer, tried to adjust the work of the USC on the relevant principles, but did not find mutual understanding with Serdyukov on pricing issues.

As for the aforementioned letter of Dvorkovich, according to some information, Putin did not read it and handed it down at the instance where it fell to the former Sechin employee, presidential adviser Anton Ustinov. Following this, the president instructed Dvorkovich to speed up the recapitalization of RusHydro according to a scheme with Rosneftegaz, that is, to do what the vice-premier urged to refuse in his letter.

It seems that the odious program of Medvedev's privatization cannot be implemented either. It is again postponed indefinitely, despite numerous thematic meetings and government declarations. Thus, the Minister of Economic Development of the Russian Federation, A. Belousov, yesterday acknowledged that the privatization of a number of companies planned for 2012 could be postponed to the beginning of 2013.

“We have never fixed the exact dates of privatization of a separate company. It has always been said that this will be connected with the global situation, with the conditions, with the possibilities, ”said A. Belousov.

In the context of the impending second wave of the global economic crisis, it is difficult to predict when the desired “conditions and opportunities” will appear, therefore Belousov is cautious in his statements: “I don’t want to fix specific dates now and wouldn’t want to record whether this will happen this year or early next year, because it depends on many factors. "

Thus, so far all the actions of the conditional “Medvedev team” do not bring her the expected result, but “the Sechin team”, on the contrary, is gaining political weight due to Putin’s protection. It is still difficult to predict how this hidden struggle will affect the state of the industry. According to one version, Putin consciously stimulates the confrontation between the two camps in power, trying to achieve a balance of interests. If so, in the near future we can expect concessions towards the liberal bloc.