A year before Chernobyl. Disaster in the Chazhma Bay 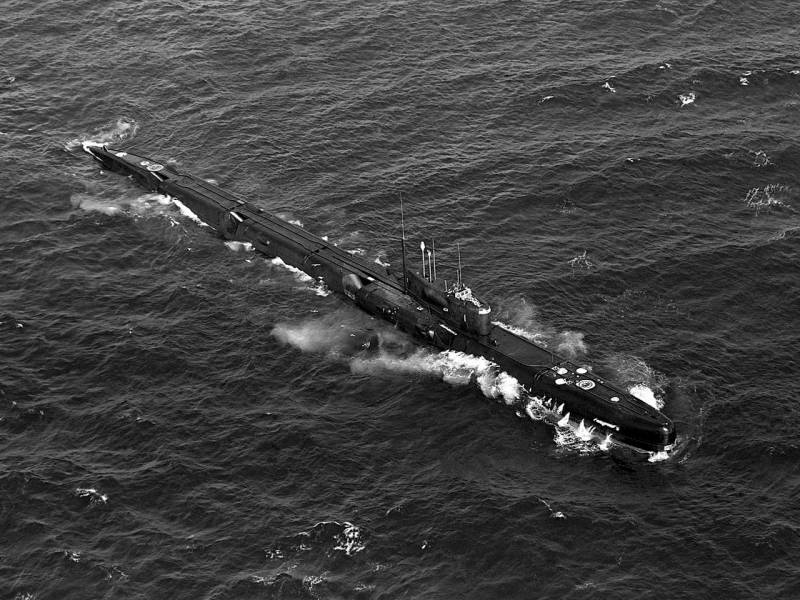 В stories In our country, the disaster at the Chernobyl nuclear power plant occupies a special place. The accident, which became the largest in the history of nuclear energy, attracted the attention of the whole world. To eliminate the consequences of the Chernobyl disaster, colossal forces of people and technology were thrown. Hundreds of thousands of people from all over the USSR became the liquidators of the accident.

Today, films and books are still being made about the events at the Chernobyl nuclear power plant in April 1986. At the same time, the Chernobyl disaster attracted all the attention of people for many years. Although even in the USSR there were other tragic accidents and incidents associated with human attempts to use the peaceful atom, including for military purposes.

So, a major radiation accident occurred on August 10, 1985 on a submarine of the Pacific fleet... A year before the events at the Chernobyl nuclear power plant and 40 years after the bombing of Hiroshima and Nagasaki, a nuclear reactor exploded on board the Soviet submarine K-431 in Chazhma Bay.

Specifically, the K-31 submarine (renamed K-431 in 1978) was laid down at the shipyard in Komsomolsk-on-Amur on January 11, 1964. Already on September 8 of the same year, the boat was taken out of the workshops and launched. Factory tests of the nuclear submarine lasted from December 1964 to May 1965. State tests were successfully completed on September 30, 1965, after which the boat became part of the Pacific Fleet. Until the accident, the boat had been in service for almost 20 years.

During the years of active service, the boat managed to make 7 autonomous voyages for combat service, including the waters of the Indian Ocean. In 1974-1975, the procedure for reloading the reactor core was carried out on the submarine without any incidents. Also, during its service at the Pacific Fleet, the boat managed to undergo repairs twice. By 1985, the submarine K-431 managed to cover 181 miles, spending 051 sailing hours on this.

Scheme of the nuclear submarine project 675, image: war-book.ru
On the boats of the 675 project, a power plant was installed, which produced 35 hp. The power of the installation was enough to provide the ship with an underwater displacement of 000 tons with a maximum speed of 5760-22 knots in the submerged position and 23-14 knots - on the surface. The heart of the boat's power plant were two VM-A reactors (15x2 MW).

The VM-A reactors belonged to the first generation of reactors designed for installation on Soviet submarines of projects 627 (A), 658, 659, 675. The VM reactors created at NII-8 in Kurchatov were a series of pressurized water nuclear reactors using thermal neutrons. Uranium dioxide, highly enriched in the 235th isotope, was used as fuel for the reactors of this series.

On the day of the accident, August 10, 1985, the submarine was at pier No. 2 of the Navy shipyard in Chazhma Bay, Strelok Bay in the Sea of ​​Japan. The defense enterprise of the Pacific Fleet was located near the Danube village (then called Shkotovo-22). The shipyard No. 30 located in the village was engaged in reloading the cores of nuclear reactors, as well as repairing Pacific Fleet ships.

The procedure for replacing the cores of the two VM-A reactors installed on the boat was planned. The specialists of the shipyard had to replace the spent nuclear fuel with fresh rods of fuel elements. The starboard reactor was reloaded without incident. But after the reboot of the left side reactor, it turned out that the reactor cover did not withstand the tightness tests. On the night of August 10, experts discovered a leak here.

By that time, all 180 rods had already been replaced, but the cover from the left side of the reactor had to be removed and reinstalled correctly to ensure tightness. As it was possible to establish, between the reactor lid and the gasket, a cinder of a welding electrode accidentally fell, which blocked the hermetic closure of the lid.

The submariners and the personnel of the coastal technical base, in violation of the instructions, did not draw up any acts and did not notify their higher authorities about the identified emergency situation and the results of hydraulic tests. The sailors also did not resort to the help of the Technical Directorate of the Fleet, whose representatives could monitor the situation and monitor compliance with the necessary protocols.

Obviously, the sailors and the staff of the enterprise did not want unnecessary problems and proceedings, so they decided to cope on their own. On Saturday, August 10, a floating workshop with a crane began lifting the reactor lid. The ensuing accident was a series of events, each of which was not critical, but in the aggregate led to a disaster. If the work was carried out on the basis of the established requirements and in compliance with all technologies, the explosion would have been avoided.

Sectional view of the VM-A reactor, image: biblioatom.ru
As the commission later established, the work on the boat on August 10 was carried out in violation of nuclear safety requirements and existing technologies. For example, to lift the reactor lid, conventional slings were used instead of shock absorbing standard hard stops. In order not to waste time, the sailors and the personnel of the coastal technical base decided not to fasten the compensating grid with slings. To do this, they would have to additionally cut off the interfering knit, located in the reactor compartment of the boat, with gas cutters.

Realizing that lifting the reactor lid would also result in the lifting of the compensating grid, which could trigger the process of an uncontrolled nuclear chain reaction, the officers in charge of the work calculated the maximum height to which it would be possible to lift the lid without any consequences.

The lifting of the reactor lid by the bow crane of the floating workshop PM-133 began closer to lunchtime on August 10. At that moment, a torpedo boat entered the bay, which ignored the warning signs at the entrance, limiting the speed of movement. The boat sailed along the bay at a speed of 12 knots, raising a wave. The wave lifted by the torpedo boat reached the shores and quay walls, rocking the floating workshop, which was not stabilized in any way. The reactor lid was not secured with rigid shock-absorbing stops.

As a result of the pumping, the crane lifted the reactor lid above the target level. At the same time, the cover pulled the compensating grille, from which it was not disconnected, and the absorbers. The reactor went into startup mode, a nuclear reaction began, which led to a powerful thermal explosion. The disaster, which claimed the lives of at least 10 submariners, occurred at 12:05 pm local time.

Elimination of the consequences and victims of the accident

In a matter of seconds, a huge amount of energy was released. A powerful explosion completely destroyed and burned the reloading house, which was installed on the hull of the boat above the reactor. In the outbreak of the explosion, the officers who were engaged in the refueling of the reactor were almost completely burned out. The whole shift in the amount of 10 (according to other sources, 11 people). Only insignificant body fragments remained from them, which were then collected in the bay and in the adjacent territory. 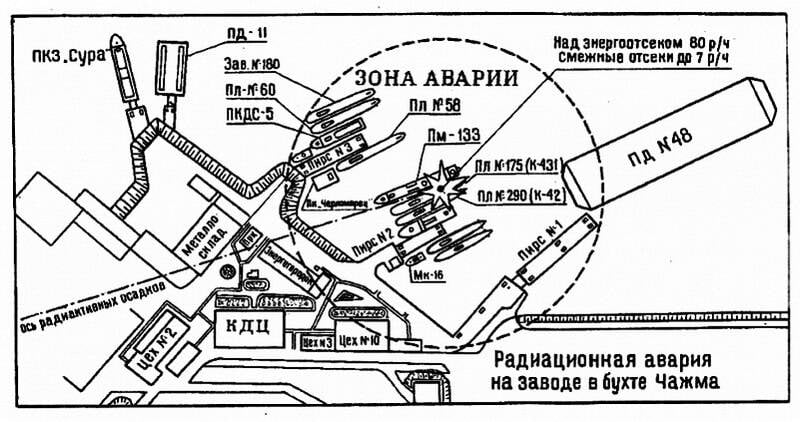 In a matter of minutes, everything that was thrown into the air from the exploded reactor turned out to be on the K-431 boat, floating workshop, pier, in the water area of ​​the bay, on local hills and a factory. It also covered the neighboring K-42 nuclear torpedo submarine of Project 627A "Kit" with radioactive emissions. The boat was subsequently decommissioned.

According to the found gold wedding ring of one of the submariners who died at the time of the explosion, it was possible to establish that in the epicenter of the explosion the level of radioactive radiation reached 90 thousand roentgens per hour, which is about three times higher than in a year it will be in Chernobyl. In the rest of the territory, the level of gamma radiation was tens and hundreds of times higher than the permissible sanitary standards.

To extinguish the fire that began after the explosion, the crews of neighboring submarines, as well as workers of the shipyard itself, were involved. These people did not have any special protective clothing and equipment, as well as special equipment for working in such conditions. Despite the complexity of the situation, the team of liquidators was able to cope with the raging fire in 2,5 hours.

Almost instantly, the information blockade mode was activated at the scene of the accident. In a nearby village, communication with the outside world was cut off, access control was increased at the shipyard, and the territory of the plant itself was cordoned off. At the same time, there was no explanatory work with the population, which was the reason that many people received a serious dose of radiation. It is noteworthy that even then the explosion of a nuclear reactor on a submarine that took place in the bay was called "cotton" in official documents.

In total, according to 1990 estimates, as a result of the accident, 290 people were recognized as victims, 10 died immediately at the time of the explosion, another 10 people were diagnosed with acute radiation sickness, and 39 people had a radiation reaction - reversible changes in the body. Already in the mid-1990s, the number of people officially recognized by the government as victims of the accident in the Chazhma Bay increased to 950 people.

For obvious reasons, this tragedy remained little known for many years, and the disaster at the Chernobyl nuclear power plant eclipsed it many times. The "top secret" stamp from the events that took place on the nuclear submarine K-431 on August 10, 1985 in the Chazhma Bay was removed only in the 1990s.