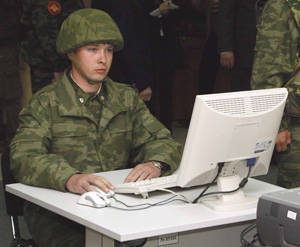 In September, 2010, Robert Gates, stated that “... the Russian minister has an interest in professional military education,” noting that it is difficult to prepare defense and security professionals. It is difficult to argue with this, and the actions of Anatoly Serdyukov’s team evoke critical reviews from political and public actors.


Reforming the military education system is a challenge for any country. Let us analyze the plans and actions of the Russian Ministry of Defense in this regard.

FORMULATION OF THE PROBLEM

The state and quality of military education affect the security of the modern state. The German philosopher Schmitt believed that “the concept of a nation is a concept of education. Only an educated nation in the sense of such qualities as human will and human self-consciousness is a nation. ” These thoughts are fully realized in the politics of modern states, when the most educated and experienced people who understand the real will of the people and are aware of the essence of the national welfare fall into the elective authorities. Literate politicians and gosdeyateli understand that the reform of education is necessarily preceded by a consensus among all participants in the socio-political process.

A similar understanding of the preliminary scientific and social adjustment of any reform seems to have developed among the domestic elite. Rector of Moscow State University Lomonosov at the international conference Yaroslavl-2009 noted: "Every proposal in the education system should be accompanied by a wide discussion in the expert community, it is necessary to take into account the opinions of teachers, teachers, professionals and scientists." We will agree and pose a problem: why did the reform of the Russian military education start without public consensus? Why is the public poboku?

Indeed, the public and experts in our country "sound the alarm", constantly notice the "flaws" and "inconsistencies" in the actions of the Ministry of Defense, the illogicality of some steps. However, it seems that no one pays attention to public concern. Several September appearances on the central TV channels of the actual head of the military education system, Fraltsova, left some experts bewilderment and questions: is it really possible to reform the military education according to a single and clear plan? If there is a plan, then what is its essence? What is the realism of this plan?

In our opinion, there are several reasons why a public discussion of the military reform plan did not take place.

First, in our country, traditionally, the leading minority is convinced that, without prompting from below, he knows how to bring the “dark” majority to a bright future. So it was in 1917 and 1991.

Secondly, in Russia, any reformer believes that the success of transformations lies on the path of democratization, which is understood as a process that has not been known by anyone. Therefore, the reform of social relations, as a rule, is carried out at random.

Thirdly, the military initially never discuss orders in their midst, and with civilians, in their opinion, it’s simply seditious to discuss their problems. That is, the domestic military authorities and the officer corps were not psychologically prepared for drastic actions by the leadership of the state.

Fourth, we believe that the need for a radical reform of the armed forces and their control system was caused by the rather chaotic military campaign with Georgia of 2008.

The calculation of the number of military universities is simple and boils down to bringing the quantitative and qualitative parameters of the military education system in line with the structure, size and objectives of the Armed Forces. This is described in the RF Government Decree No. 352 on the federal program “Reforming the system of military education in the Russian Federation before 2010 of the year”. The reduction in military colleges is justified by the fact that from 1990 to 2001 there was a significant reduction in the number of aircraft, while the network of military schools was not reduced in the respective proportions.

But why the places for the service of officers were reduced, and their overproduction continued? How to explain such a disproportion on the part of the Ministry of Defense? Calculations about what was more profitable than cutting? The desire of the military department to intensify the adaptation of military education to the modern tasks of the Armed Forces and the transformation of society is understandable. At the same time, the foundations are being laid for the possible unification of military education to a single pan-European system of collective security. For the Ministry of Defense, management of universities is simplified and the competition increases when they enroll in them in the future, financial savings and a number of advantages are provided.

Will such actions of the Ministry of Defense be able to solve the real problems of the Armed Forces and military education? In our opinion, it is doubtful, since the place, role and functional duties of the officer in the new moral and organizational system of the troops are not defined, in which, according to the plan of transformations, the emphasis on teaching and educational work with the soldier during peacetime and wartime is transferred to the sergeant under the contract. But the sergeant is not yet prepared in the literal and figurative sense. They exist virtually, but they are not yet real. At the same time, the material and technical base is deteriorating in higher education institutions, the intellectual level of teaching staff is decreasing, and many of them still do not understand the essence of transformations, and intellectual teachers do not want to work for a penny.

What will the sun give a numerical reduction in higher education? At the first stage, there are many difficulties in bringing the number of officers to the optimum. Already, officers who want to serve offer sergeant positions with no clear career prospects. In the following it should be assumed: 1) most likely - a shortage of young officers for the needs of the troops, especially in obtaining officers in rare specialties; 2) difficulties with motivation for the service of a large part of the officers; 3) increase of problems with recruiting officer positions in military units "beyond the Urals". Reflections on the problems that will result in a reduction in the number of universities, we have systematized in the tables that are offered to readers on page 7.

The plan of the Ministry of Defense, which consists in replacing a significant part of the officer positions in higher education institutions with civilian specialists, has been formed for many years. And when, after the next reform, there were not enough officers in the army, successful recruits were made from among students of non-military universities. Consequently, it is possible to repeat this experience, only the other way around: “drive off” a part of officer positions and replace them first with reserve officers, and later with civilian specialists in general. This is the plan of the Ministry of Defense.

But what will be the return? In our opinion, social benefits for military personnel will decrease, which will lead to financial savings. In many non-specialized posts of teaching staff, civilian teachers will appear, which will increase their mobility. At the same time, the number of officers, especially senior ones, will decrease, their motivation for teaching will be lost. Perhaps the initial significant decline in the quality of education in higher education. But at the same time, the existing problems of the army and military education will not go away. There will be a low social security of servicemen and civilian personnel, low remuneration of teachers. As a result, in the conditions of a shortage of funds for military reform, saving becomes an end in itself.

What is the result? It is possible that part of the teaching staff in higher educational institutions will be freed from the duties of military service and will be able to go to other universities, but the Ministry of Education and Science also makes reductions in them. Consequently, scientists and teachers in uniform are left to the mercy of fate, and the Ministry of Defense saves again. The officers have lost motivation for pedagogical activity. And we believe that very soon the Ministry of Defense will begin to order PPP to civilian universities for itself. Sad forecast.

The reduction of about 200 thousand officers demanded that the Ministry of Defense take emergency measures. Among them is the suspension of admission of applicants to military schools over the next four years. Universities gradually "die" themselves, and the dream of many boys to be officers became unrealizable. With such tough measures is the alignment of the number of officers in connection with the new look of the army.

In our opinion, this inevitably leads to problems with the succession of personnel officers in the military, the higher educational institutions simply do not have time to restructure themselves to the Bologna process, the attractiveness of military service in Russian society decreases. By the way, the Soviet society "shook" more than once when it allegedly did not need officers.

What is the result? Already today Russian military traditions are being violated, the threat to Russian military dynasties is real. The generation of today's 17 – 19-year-old young men is left without the possibility of going to school to get an officer’s rank, which reduces the educational level in general in the Armed Forces and creates new problems with the training of officers in the future. We also predict increased turnover of non-military PPS in higher education institutions.

What and who will benefit from this?

What is the interest of the Russian Ministry of Defense when it seeks to bring its institutions of higher education outside of Moscow and other major cities?

“Only that army in which military-scientific literature is flourishing can be good and reliable,” emphasized our compatriot A.A. Svechin. Without science and its development, not a single human sphere of life can successfully exist, and the army even more so. However, the Ministry of Defense is making an unprecedented reduction in the number of design and research structures in the Armed Forces. The interest of the Defense Ministry is clear: 1) reduce the number of senior officers and the cost of their social security; 2) eliminate mechanisms for the participation of officers in commercial and corruption schemes; 3) eliminate a group of non-combat officers; 4) release real estate for sale.

However, how is the Defense Ministry going to eliminate the pronounced lag of the domestic military-industrial complex in scientific, research and development activities? How can this neutralize the inability of the Ministry of Defense to organize effective scientific and research work in the Armed Forces? So far no one has heard the answers to these questions.

In our opinion, the result of reducing the number of design and research structures in the Russian Armed Forces will be a further reduction in the impact of internal scientific, research and development work. At the same time, the significance of the joint-stock scientific research institutes and design institutes, as well as enterprises and scientific research institutes of the military-industrial complex, is greatly increasing for the Ministry of Defense. We believe that it is expedient for the Russian defense ministry to urgently create an outsourcing structure in the military administration system.

Thus, changes in the domestic system of military education have matured long ago. But, unfortunately, all branches of state power, the public and the media were out of the preparation and implementation of these changes. These changes already affect the military security of Russia. We do not support the desire to save on military education. At the same time, real informatization, computerization and Internetization of military universities will be a blessing.

Reforming military education is not an internal affair of the Armed Forces. The Ministry of Defense will have to reckon with the requirements of the Bologna process for national educational systems and it makes sense to seek support for their actions from the public and the media. It remains to understand: is the Russian Defense Ministry ready for this?