Russia's role in the existence of Moldova 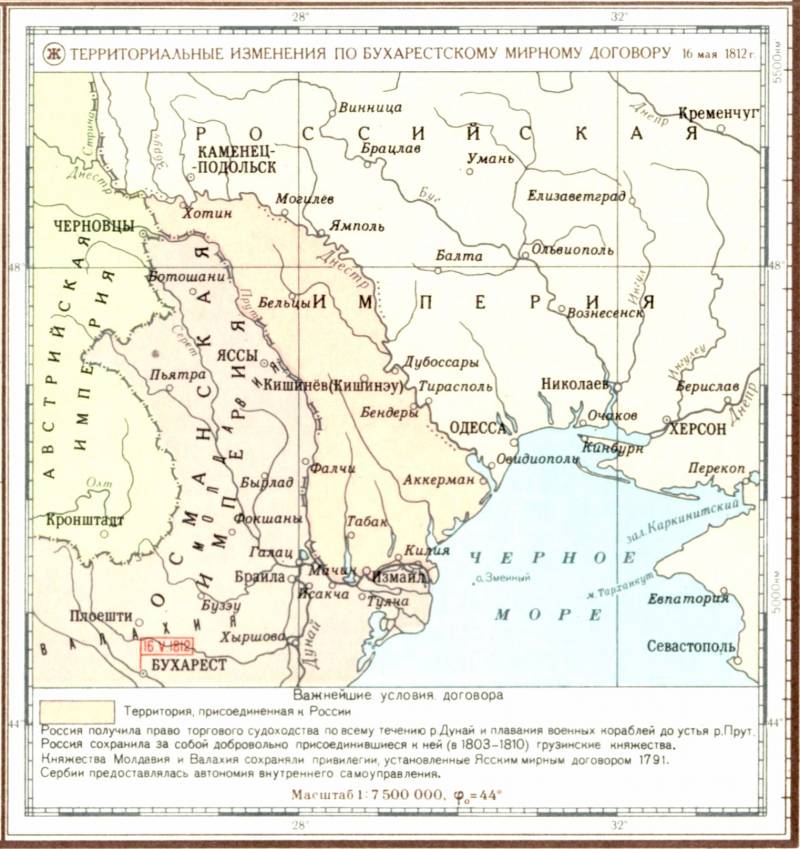 Russian-Turkish War 1806-1812 Territorial changes under the Bucharest Peace Treaty on May 16, 1812 Source: Marine Atlas of the USSR Ministry of Defense

Transnistria has been part of the sphere of influence of the Russian civilization (Hyperborea - Aria - Great Scythia - Russia) since ancient times. The immediate ancestors of the Rus-Russians lived in the local lands - the Aryans, Cimmerians and Rus-skolots (Scythians). These lands were the site of a fierce confrontation between our ancestors and the Romans. Since that time, the romanization of the local population begins.

In the course of the great migration of peoples, new Slavic-Russian tribes, in particular, the Wends and Antes, entered the region. Subsequently, the Slavic element became the main population of Transnistria. The Tale of Bygone Years says that

“... catch the Tiberians seyahu along the Dniester, squatting down to the Dunaevi. Not a multitude of them; I'm gray along the Dniester to the sea, and the essence of their gradients to this day ... ”.
In the XNUMXth century, the Slavic tribes that lived in the Dniester-Prut interfluve became part of the Kiev state. In the XI-XIII centuries. in the southern part, nomads-Polovtsy appear, in the northern forest-steppe part between the Carpathians and the Dniester lived Rusyns-Russians and the Vlachs (Volokhs) moved from Bulgaria and Serbia.

In general, the region was part of the Russian principality - Galician Rus. Also on the Dniester, in the lower reaches of the Danube, the Vygons, roaming and Berladniks settled. These were the predecessors of the Cossacks, immigrants, fugitives from various Russian lands, who fled because of feudal oppression, looking for a better life in the rich southern lands. Byrlada land, with its capital in Byrlad, was one of the political predecessors of the Moldavian principality.

The Transnistrian-Carpathian lands did not escape the pogrom during the invasion of Batu. The southern part of the region became part of the Golden Horde, the rest of the territory retained its autonomy, but was in a certain dependence. In the southern ports - Belgorod and Kiliya, Italian (Genoese) merchants appear. During the reign of the Golden Horde, the Vlachs became a significant part of the population of the Dniester-Carpathian region. It is obvious that the Russian population, pressed from the West by Catholics, Hungarians and Poles, found allies in the Orthodox Volokhs.

The collapse of the Russian Galicia-Volyn principality in the second half of the XIV century led to the expansion of Hungary, Lithuania and Poland. Subcarpathian Rus was captured by the Hungarians, the lands of Southwestern Rus were included in the Kingdom of Poland (Galician Rus) and Lithuania (Volyn).

During the weakening of the Golden Horde, the Hungarians pushed the Horde out and founded their own brand in the 1340s. Its first ruler was the governor Dragos. Soon, the voivode in Maramures, Bogdan I, quarreled with the Hungarian king, raised a mutiny, seized the Moldovan mark, displacing the grandson of Dragos Balk. He created an independent Moldavian principality. Hungary recognized the independence of Moldova in 1365. After an unsuccessful attempt to introduce Catholicism, Orthodoxy was consolidated in the country.

The Moldavian principality was created by local Russians (Rusyns) and Volokhs. Most of the cities that became part of the Moldavian principality are named in the Novgorod and Voskresenskaya annals as Russians, since they were founded by the Russians, and the Russian population predominated in them. Among them are Belgorod, Sochava, Seret, Banya, Yassky bargaining, Romanov bargaining, Khotin and others.

In fact, Moldova was founded on the foundation created in Kievan and Galician Rus. Including more than 20 city-cities with a rich material and spiritual culture, developed craft and trade. The first rulers of Moldavia Bogdan (1359-1367) and his son Lacko-Vladislav (1367-1375) were Rusyns by origin. Lacko's premature death prevented the establishment of the Russian dynasty in Moldova.

The strengthening of the Moldavian principality was facilitated by the victory of the Grand Duke of Lithuania and Russian Olgerd (in Lithuanian Rus 90% of the lands were Russian and the majority of the population was Russian) over the Horde on the river. Blue waters in 1362. As a result, Lithuanian Rus restored its power to the Black Sea and to the right bank of the Dniester (like its predecessor Galician Rus). The Tatar presence in the region was weakened. The Moldavian principality included the area between the Prut and Dniester rivers.

At the same time, despite the large number of Russians in Moldova, they mainly settled in the north and north-east of the principality: Bukovina, Pokut'e, Khotinsky, Soroksky, Orhei and Yassky cinutes (counties, districts). In the XNUMXth century, the ethnographic situation remained generally the same. Russians (Rusyns, Ruthenians) inhabited Chernivtsi and Khotyn districts, the entire Dniester region, Soroksky and Orhei districts, along the Prut - half of the Yassky district and half of the Sucevsky district.

Moldovan statehood was formed on the basis of the Russian one. The very name "Moldova" comes from the Slavic "molid-mold" - "spruce". The rulers of Moldova were called rulers, voivods. The boyars were large landowners, the monetary system was created on the model of the Galician one. Districts were called powers, in Moldovan documents - cinutes (from the word "hold").

The Russian beginning prevailed for a long time in many spheres of Moldavian life. The Russian language was not only ecclesiastical, but also judicial, business documentation and state acts were written in Old Russian.

The Orthodox Church played an important role in the Russian-Moldovan synthesis. The Moldovan ethnos and language itself was created under the strong (if not leading) influence of the Russian people and language. Most of the local Rusyns eventually became part of the Moldavian people. But this process was lengthy.

Only by the beginning of the XNUMXth century, the Moldovans assimilated most of the Rusyns in central and even northern Bessarabia. Well, the essence of this phenomenon is conveyed by the Moldovan proverb of that era: "Tatel Rus, Mama Ruse, Numay Ivan is Moldovan", that is, "Father is Russian, mother is Russian, and Ivan is Moldovan." As a result, Moldovans are very different from other groups of Romans, including the Vlachs. In particular, in anthropological terms, Moldovans belong to the Eastern Slavs.

Thus, the Moldavian principality was Volosh-Russian. At the same time, the Volokhs underwent Russification, received a powerful anthropological, state, cultural and linguistic impulse from the Russians. The Russian population prevailed in the north and northeast and for a long time retained its ethnocultural identity. From its inception to the beginning of the XNUMXth century, Moldova remained a bilingual country.

As part of Russia again

In the XNUMXth century, a new threat arose in the Balkans - the Turkish one. Moldovan rulers tried to resist the Ottomans.

Stephen the Great (1457–1504), the most famous Moldovan ruler, successfully resisted Turkish expansion for a long time. From the beginning of the XNUMXth century, Moldova fell into vassal dependence on the Ottoman Empire. Stephen's son, Bogdan, recognized himself as a vassal of the Port. Also, the Rzeczpospolita began to lay claim to Moldova.

Since that time, the Moldovan rulers, trying to save the country from Islamization and oturization, have repeatedly asked for Russian citizenship. The rapprochement with Russia was supported by the Orthodox clergy and a significant part of the Moldovan nobility. At the same time, a significant part of the elite of the Moldavian principality retained Ruthenian origin. In 1711, the Moldovan ruler Dmitry Cantemir in Iasi swore allegiance to Russia. After the unsuccessful Prut campaign, the gentleman had to flee to Russia with his family and families of many boyars.

Since 1711, Moldavia was ruled by the rulers from the Phanariot Greeks appointed by the sultan's government (the Phanar quarter of Constantinople, which enjoyed great privileges in the Port). Turks populate the southern part of Moldova with Tatars and Nogais (Budjak Horde). Russia's victories over Turkey led to the liberation of the principality from the Turkish yoke. In 1774, according to the Kyuchuk-Kainardzhiyskiy peace, Moldova received great freedom, the patronage of Russia. True, Austria used the victory of Russia in its own interests and occupied Bukovina (Russia returned it in 1940).

According to the Bucharest Peace of 1812, after defeating the Ottomans in the war of 1806-1812, Porta ceded to the Russian Empire the eastern part of the Moldavian principality - the Prut-Dniester interfluve (Bessarabia). The rest of the principality remained under Turkish rule. The border between Russia and Turkey was established along the Prut River. Turks, Tatars and Nogais were evicted from this area. Most of the Turkic population went beyond the Danube, the other was evicted by the Russian authorities in the Azov region. The Bessarabian province was created on these lands.

After the Russo-Turkish War of 1828-1829, the part of Moldavia and Wallachia that remained under Turkish rule received greater autonomy and fell into the sphere of influence of Russia. The Russians carried out a series of progressive reforms that contributed to the creation of a new state - Romania. After defeat in the Crimean War, Russia lost power in the Danube principalities and ceded part of Bessarabia. In 1859, the Moldovan lands united with Wallachia into one state, Romania was created in 1862. Having defeated Turkey in 1877-1878, Russia returned South Bessarabia. In Europe, Romania was recognized as an independent state.

Bessarabia, annexed to Russia, after long wars, was devastated by the Turks and Tatars. The population dropped sharply to 275-330 thousand people. Bessarabia as part of Russia has made huge strides in development. Chisinau from a handful of dugouts became one of the most beautiful cities in the empire. Security and improvement of the socio-economic situation led to a sharp increase in the population of the province.

If in 60 years of the XIX century the population of Russia increased more than 2 times, then in Bessarabia in 50 years due to immigrants and natural growth in 1812-1861 - 4 times. Khotyn district was especially populated. In 1812, 15,4 thousand people lived here, in 1827 - more than 114 thousand. From 1812 to 1858, the population of the district increased by 11,5 times. Most of the inhabitants of the district were Russian-Rusyns. Many migrated to Bessarabia from Bukovina and Galicia, which belonged to Austria.

Previously empty lands in the central and southern parts of the region are quickly being reclaimed. Cities and urban populations are growing. The population of Chisinau from 1811 to 1861 increased 16 times. Chisinau becomes one of the largest cities of the empire: in 1856, in terms of the number of inhabitants (63 thousand), it was second only to Petersburg, Moscow, Odessa and Riga.

After the Russian Revolution of 1917, Bessarabia was occupied by Romania in 1918. In the summer of 1940, the Soviet Union returned Bessarabia and created the Moldovan statehood - the Moldavian Soviet Socialist Republic. During the period of entry into the Russian Empire and the USSR, Bessarabia (Moldavia) reaches its peak in its stories.

Modern Moldova is an impoverished and dying country, which is considered by the West and the Romanian elite as the future province of “Greater Romania”. In general, the Moldovans outside of Russia have no historical perspectives. Only total de-Russification, Romanization and Catholicization, a poverty-stricken agrarian appendage of Romania. 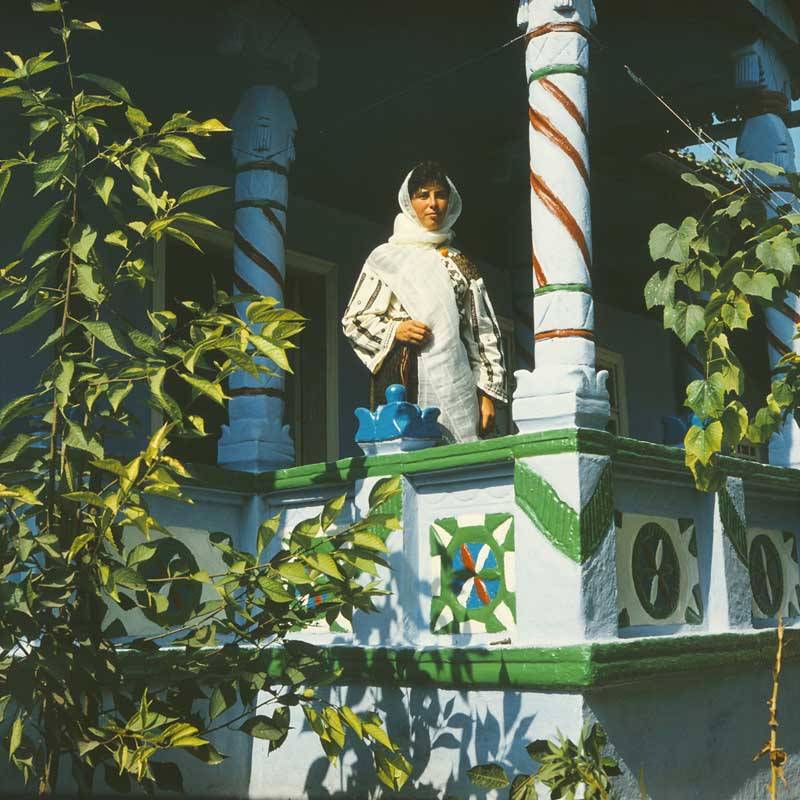