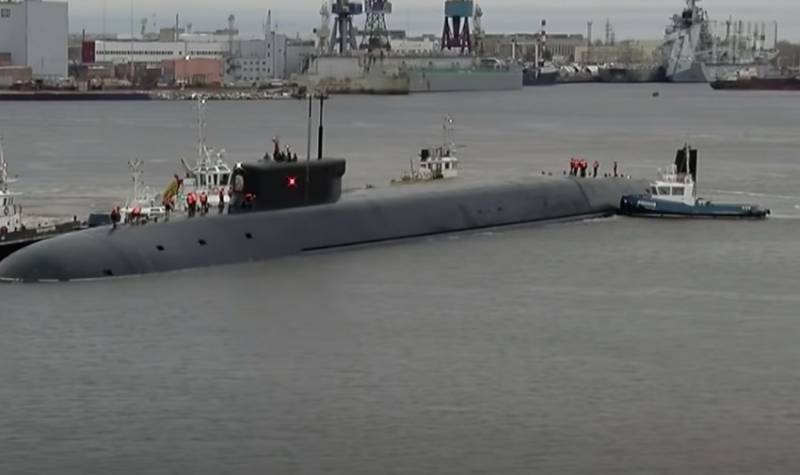 
Submarine missile carrier, which this year should be part of the Russian fleet, began its first trip to the sea ranges of the Northern Fleet as part of the tests that had begun. Moreover, the submarine left even earlier than planned. Earlier it was reported that the "Prince Oleg" will go to sea in early June, and not at the end of May, as it happened.

According to a source in the OPK, whose words are quoted by TASS, the launch of the missile carrier for testing took place on Sunday, May 30 in the evening. There is no information about the test program at this stage.

According to the information announced earlier, the Knyaz Oleg APRKSN will become part of the Russian Navy in the fourth quarter of this year, that is, not earlier than October. Until that time, he will have to go through the entire test program, including the Bulava launches.

Four Boreas are in service with the Russian Navy, of which three projects 955 (Borey) of the 4th generation are strategic missile cruisers Yuri Dolgoruky, Alexander Nevsky and Vladimir Monomakh, as well as one submarine missile carrier of the modernized project. " Borey-A "-" Prince Vladimir ".
Ctrl Enter
Noticed oshЫbku Highlight text and press. Ctrl + Enter
We are
APRKSN "Prince Vladimir" of the project "Borey-A" entered the second stage of runningDecember 2010 years. Russian March. Senseless and merciless? Notes not a Russian person
Military Reviewin Yandex News
Military Reviewin Google News
12 comments
Information
Dear reader, to leave comments on the publication, you must sign in.