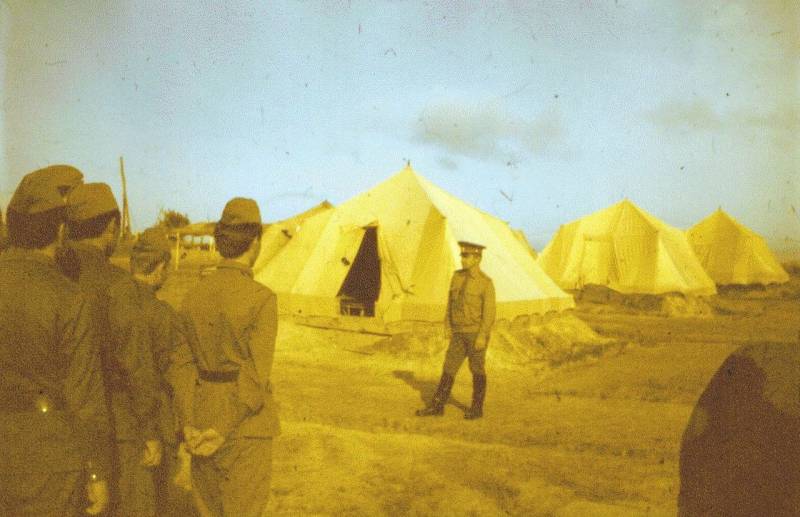 In our world, everything begins with paper, the collection of 1941 also began with a document:

No. 306. Extract from the minutes of the decision of the Politburo of the Central Committee of the CPSU (b)

155. On the conduct of training camps for military reserves in 1941 and the attraction of horses and motor vehicles for training from the national economy.

1. Allow non-profit organizations to call for military training in 1941 in the military reserve in the amount of 975 870 people, of which:

2. Allow non-profit organizations to attract 45 horses and 57 cars for training camps from the national economy for a period of 500 days, with distribution across republics, territories and regions according to the appendix.

a) in reserve rifle divisions in three stages:

The armies of the period of the second half of the XIX - XX centuries were mobilization, their personnel was relatively small, and in the event of a war, reserve ones were called up, who completed the existing divisions and formed new ones, namely mobilized ones, and became the basis of the army and bore the burden of the war. This was the case in all wars of this period, and World War II was no exception. And even more so, the USSR could not be an exception, with our vast territory, uneasy relations with neighbors and a chronic shortage of workers.

Actually, until 1939 there was no general military service in the USSR, and a significant part of the conscripts served in a non-military way, by going through training camps. By 1939, when they finally introduced general military service and began to increase the army, everything was difficult with the reserve contingent. Part of it served, but served earlier, before the advent of new technology and new tactics, part of it “served” at training camps in the first half of the 30s, that is, it had only basic training of a very curtailed nature, and some percentage did not serve at all. All these people had to be pulled up / trained / retrained, units and crews had to be assembled from them ... All the more so was the experience of the "Liberation Campaign" in 1939, when they were called into service, calling it large training fees:

2 610 136 people, who on September 22, 1939 by the Decree of the Presidium of the Supreme Soviet of the USSR and the order of the People's Commissar of Defense No. 177 of September 23, were declared mobilized "until further notice." The troops also received 634 horses, 117 vehicles and 300 tractors.
The collection of mobilized people and equipment was slow, during the campaign itself there were a lot of problems with the qualifications of personnel. All this had to be corrected and put in proper order. Any training camps, in addition to training fighters, are trained by military enlistment offices, and military units for the reception and distribution of spare, and transport, for the transportation of huge masses of people, increasing the general mobilization readiness.

It seems to me that there was still one more consideration - by replenishing the army with a mass of people in periods threatened for an attack, the authorities also increased the general level of combat readiness of the Red Army, and accelerated, in which case, mobilization as a whole. This is not in the documents, but just a guess - why not? In the end, the training camp was carried out in the reduced divisions, and the lion's share of the reserve ones took place in special districts. So, in 1941, the Western Special Military District received 43 people, the Kiev Special - 000, but the Far Eastern Front, together with the Trans-Baikal Military District - 81.

To strengthen mobilization readiness during 1940, conduct training camps for the assigned personnel for a period of 45 days for junior command personnel and 30 days for rank-and-file personnel.
To attract to training fees:
a) In all divisions of the six thousandth composition, 5 men each, in a total of 000 divisions - 43 men;
b) In the divisions of 2 in the Kiev, Belorussian, Odessa, Kharkov, North Caucasian and Transcaucasian military districts, 000 men each, and in the ZabVO, 1 men each. A total of 000 people;
c) There are 156 people in all spare shelves;
d) In other units (artillery of the RGK, Air Defense, UR'y and retraining of the command personnel of the reserve) - 297 people. In total, 000 people will be attracted to the training camp, not counting the 766 people currently undergoing training sessions.
In April-May, a million people were called to the training camp, who were trained and returned to their homes. There were no mobilization fees in 1940, no war was planned, there was, of course, not a routine, but quite understandable retraining and tightening of mobilization mechanisms, which was reasonable and necessary during the ongoing World War II.

In 1941, it was decided to hold the training camp again, with clearly stated goals and objectives:

2. The main tasks of training camps are:

a) improving the combat training of the assigned personnel by positions and specialties in accordance with the assignment for wartime;

c) putting together a squad, platoon, company, battalion and regiment in states close to wartime;

d) instilling in commanding and junior commanding personnel of practical skills in commanding subunits.
In order to bring together subunits and crews to an acceptable level and reinforce deep divisions, divisions of special districts, especially six-thousandth divisions, in a dangerous period. The logic is clear - to put in order the divisions of the three thousandth (according to the wartime division of the Red Army 14 people), full mobilization and some time for preparation are needed, and the six thousandth, having accepted the participants of the training camp, turn into a more or less combat-ready unit. Another question, in the memoirs of our military leaders to stories with the training camps, the phrase "in view of possible aggression" was certainly added, which is not entirely true. In the sense, the training camp was held in view of the tense international situation, just as for this reason the size of the Red Army increased, general conscription was introduced and special districts were rapidly strengthened. But specific training camps are just one of the activities on this list, and not preparation for repelling aggression.

Or maybe we wanted to attack ourselves? Well, if the fees are a sign of preparation for aggression, then we wanted to attack in 1938, when one million three hundred thousand people were called up against them, according to directive No. 4/33617. No doubt they were going to make it to Antarctica in 1939, when 2,6 million people were drafted. Again they were preparing to attack the whole world in 1941, when 1 million people were drafted. But in 1941, only 900 thousand were planned to be conscripted ...

But seriously, before the general conscription, training was the only way to maintain a more or less adequate level of combat capability of the reserve, many of whom did not serve in the army. And 1939 in Poland and Finland showed a simple thing - the Red Army, after the reforms of the previous 20 years, is not capable of fighting, as evidenced by the Act on the Acceptance of the People's Commissariat of Defense of the USSR Timoshenko S.K. from Voroshilov K.E .:

Regulatory mobilization activities are not completed by development.

2. The People's Commissariat of Defense has not yet eliminated the following shortcomings of the mobilization plan, revealed during the partial mobilization in September 1939:

a) the extreme neglect of the inventory of military-liable reserves, since the inventory has not been carried out since 1927;
b) the lack of a single record of those liable for military service and the existence of a separate special record of railway workers, water transport and the NKVD;
c) the weakness and lack of work of the military commissariats;
d) lack of priority in the mobilization of units, which led to an overload of the first days of mobilization;
e) the unreality of plans for the deployment of troops during mobilization;
f) the unreality of the plan for the supply of uniforms during mobilization;
g) the unevenness of the rise in the mobilization of persons liable for military service, horse-drawn personnel and motor vehicles;
h) the absence of a firmly established order in the reservation of labor for wartime;
i) the unreality and unsatisfactory state of registration of horses, carts, harnesses and vehicles.

3. Among the reserves liable for military service are 3 untrained people. The People's Commissariat of Defense has no training plan for them. Among the trained personnel are registered military reserves with insufficient training and in a number of specialties, the mobilization need for specialists is not covered. The People's Commissariat of Defense also does not have a plan to retrain specialists and retrain poorly trained personnel.

4. Manuals on mobilization work in the troops and military registration and enlistment offices, recognized as obsolete, have not been revised.
So they began to feverishly develop and test plans, and train these three million. Everyone in the Kremlin then understood that there would be a war, and that Comrade Voroshilov had ruined the work of the People's Commissariat, so they corrected, as they could and as best they could, along the way trying not to ruin the economy, and replenish the divisions with personnel and equipment, at least for threatened period. This partially worked, at least some of the divisions did not wait for a week or more for the arrival of personnel, but immediately moved into battle, having as fighters and junior commanders called up for training.

And it was hardly possible to do better. It's good to judge ancestors now. And then, when money for a normal army appeared only in the second half of the 30s, the lion's share of the reserve was not trained, the officer corps was weak (the cadre tsarist officers were killed by the red commanders in the 20s and 30s in the heat of political struggle, and in 1937-1938 they were killed and red commanders who want something strange), the population is illiterate (the obligatory seven-year plan was introduced until 1937), and there was a war of engines ahead? When does our production culture and design school lag behind the enemy? When there is confusion and vacillation among the people and a bunch of people offended at the authorities and at each other?

We were able to, jumped out and resisted. But it's funny to read how this army was supposedly going to conquer the world, or that only allegedly because of the stupidity of the leadership, 1941 happened. Everything was simpler and sadder: we, a hundred years behind, really ran them in ten, but did not have time to fully catch up with the West.

Fees are one of the tools to close this gap. And the fact that we won is the best proof that everything was done correctly.

Ctrl Enter
Noticed oshЫbku Highlight text and press. Ctrl + Enter
We are
Is the General Staff guilty or not of communication problems with 22 June 1941?Myths of the Great Patriotic. Did Stalin have prostration in the first days of the war?
Military Reviewin Yandex News
Military Reviewin Google News
77 comments
Information
Dear reader, to leave comments on the publication, you must sign in.