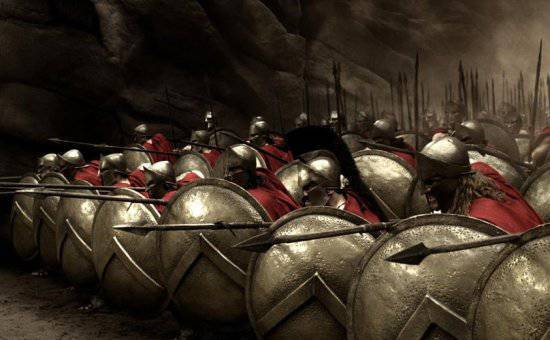 Why myth? Therefore. Because if the Spartans who fought in those days were exactly three hundred, then how can one explain the loss of the Greeks, who in that battle were about 4 thousands killed and about 400 taken prisoner?


I tactfully leave the film of the same name with such a name as a good sample of epic marasmus, with its three-meter Xerxes wrapped in a chain, fighting elephants, the size of a good five-story building, and fighting rhinos rushing into battle (films with such a name, by the way, were It has been shot at different times already, but now I’m talking about the last one that caused so much noise at the box office).

But back to the designated topic: so, according to many, in 480 BC. The Persian army of Xerxes in the town of Thermopylae (“Hot Gate”) was opposed by 300 soldiers from the city of Sparta (led by the courageous king Leonid). However, things were not quite right.

For the answer, we turn to "Stories"Herodotus, to the book of the seventh (" Polyhymnia ") of this work - the only reliable source about this battle, where in the paragraphs 202 and 203 we read (the number of soldiers I have highlighted in bold):" The Hellenic forces that were waiting in this area of ​​the Persian king, from 300 Spartan hoplites, 1000 Tegues and Mantinians (by 500 of those and others); further, the 120 people are from Orchomen in Arcadia and 1000 are from the rest of Arcadia. So much was the Arcadians. Then from Corinth 400, from Flint 200 and 80 - from Mycenae. These people came from the Peloponnese. From Boeotia there were 700 Thespians and 400 Thebes. In addition, the Hellenes summoned the Opunta Locrians with all their militia and 1000 Foksi ... ”*. By simple arithmetic calculations, we get the number: 5200 warriors (note: Wikipedia in the “Thermopile Battle” article gives other numbers: 5920, nevertheless this number is wrong, because the Wikipedia author cited the number of warriors from Miken, “800” instead of “80”, which accounts for the inaccuracy of the calculation).

So, we see not three hundred, but more than five thousand soldiers. In this case, I especially emphasize the word “warriors”, since Herodot included only professional heavily armed warriors (google), while Herodot, speaking of the number of Spartans, reports only the number of helpers, not counting this is the ilots, peculiar state serfs in Sparta, which the Spartans used as lightly armed soldiers and servants, but with whom they did not share fame. Men like the Spartan tribes were also among the warriors from other Greek polis. The number of Spartan ilites in the Battle of Thermopil can only be calculated approximately, since Herodotus is simply silent about their number. At the same time, according to the same Herodot, a year later (479 BC), in the battle of Platai, for every Spartan city, there were 7 ilotas; their ratio in the Battle of Thermopylae is unknown, but apparently it was about the same, based on the number of Greeks killed in the battle. Total only Spartans in that battle was attended by about two thousand people.

By miscalculation, a number of specialists in the Fermopilsky battle of the Persian army confronted about 12000 the Spartans and their allies from other Greek policies, which you will agree, certainly not 300.

However, this circumstance in no way minimizes the feat of the Spartans and warriors from other Greek policies, because they were opposed by about 200 of thousands of Persian soldiers, including the elite parts of Xerxes - the so-called "immortal". In this battle, which lasted three days, about 20 thousands of Persians (including 2 siblings of King Xerxes) fell, while the losses of the Greeks are given at the very beginning of the article.

Ctrl Enter
Noticed oshЫbku Highlight text and press. Ctrl + Enter
We are
Cossack Thermopylae: the Battle of CupidThe myth of the "Ukrainian Thermopylae"
160 comments
Information
Dear reader, to leave comments on the publication, you must to register.