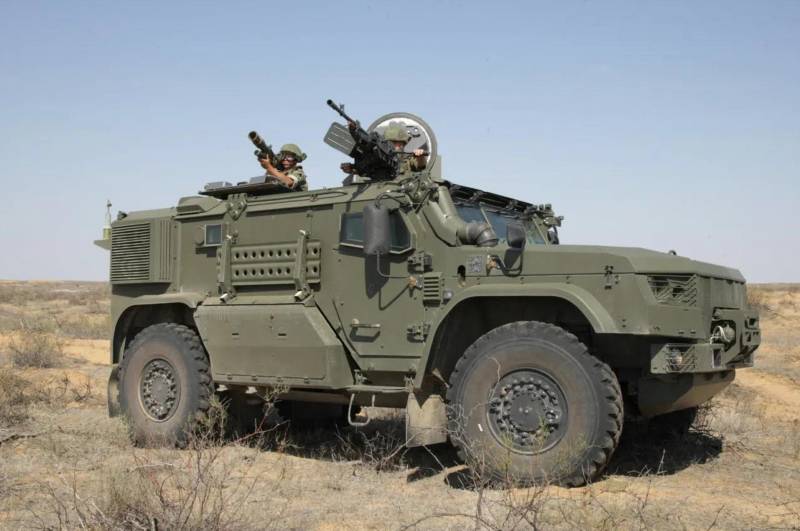 One of the most interesting novelties of military equipment, presented in the Victory Parade on Red Square on May 9, 2021, was the combat vehicles of the anti-aircraft gunner squad of Typhoon-Air Defense systems.


Four combat vehicles of this promising air defense system marched in parade formation. Of course, participation in the Victory Parade testifies to the high appraisal of the new combat vehicle.

Combat vehicles "Typhoon-Air Defense" are the development of the Izhevsk Electromechanical Plant "Kupol" at the expense of its own resources, with the support of the Concern East Kazakhstan "Almaz-Antey" and the leadership of the Air Defense Forces of the Land Forces of the Ministry of Defense. Earlier, prototypes of Typhoon-Air Defense took part in the International Army Games-2019 and in the dynamic demonstrations of the Army-2020 forum, and even then attracted the attention of specialists and amateurs of military equipment.

For example, in the version of equipping the vehicle with the "Verba" MANPADS, it is possible to intercept air attack weapons flying at a speed of up to 420 m / s, at a distance of 0,5 to 6 km and at an altitude of up to and more than 3 km. In addition, a detachment of anti-aircraft gunners MANPADS can receive target designation from a higher combat command post, being right in the car, and simultaneously fire from a machine gun and MANPADS at speeds up to 20 km / h.

If necessary, the Tor-M2 anti-aircraft missile systems, which are also produced at the Kupol defense plant in Izhevsk, can be used as a command vehicle for the Typhoon-PVO BM. Acting in conjunction with short-range air defense systems, in the "mixed link" mode, anti-aircraft gunners can use powerful radars of the "Tor-M2" complexes for reconnaissance of the air situation and target designation.

Considering the growth in the use of unmanned aerial vehicles in modern theaters of military operations, which, despite their inexpensive cost, can cause serious damage to the enemy, this practice allows you to save anti-aircraft guided missiles, the cost of which is sometimes tens of times higher than the cost of enemy UAVs.

In addition, using a large-caliber machine gun and anti-aircraft missiles against lightly armored and unarmored vehicles, the Typhoon-Air Defense vehicles, which are super mobile compared to other anti-aircraft weapons, being in the combat formations of troops, can also be used to solve various fire support tasks.

The adoption of the Typhoon-Air Defense combat vehicles for service and the further deployment of their mass production is expected in 2021.
Ctrl Enter
Noticed oshЫbku Highlight text and press. Ctrl + Enter
We are
Will Russia be able to repel a strike from space?Almaz-Antey published the results of field experiments that determine the cause and those responsible for the crash of MH-17. The West has tensed ...
Military Reviewin Yandex News
Military Reviewin Google News
35 comments
Ad