An unenviable fate: The last fragments of the Sea Shadow stealth ship were melted down in the USA 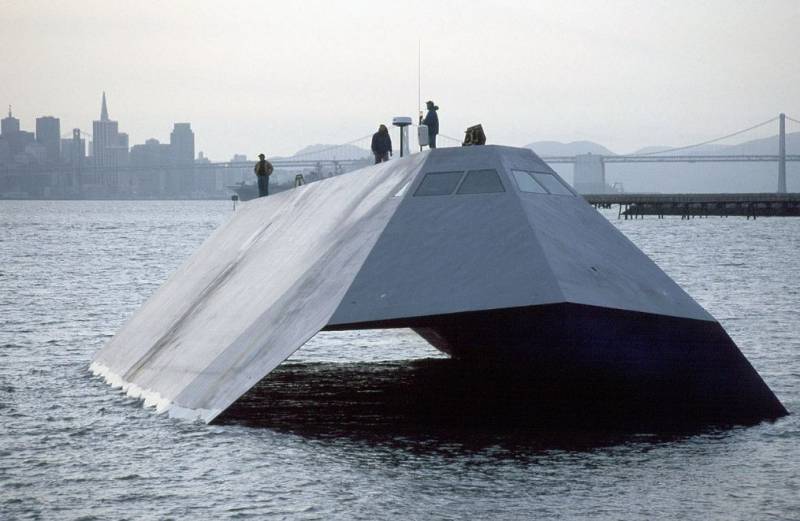 The construction of the "invisible ship" in the United States was puzzled back in the 1970s. In 1978, Lockheed Martin began developing the first version of such a ship. The idea for its creation, according to the author of the publication Bussines Insider Peter Suciu, was based on similar projects in the field of aircraft construction, which began to develop around the same time.


Initially, Lockheed Martin introduced a cigar-shaped body design. Its flat corner surfaces were much less noticeable, and also drowned out the sounds of the engine and internal noises inside the ship. Subsequently, experts have carried out numerous acoustic studies and have achieved even more impressive results.

However, the Pentagon did not show much interest in these studies until the head of the Skunk Works Ben Rich justified all the benefits of using this technology in the construction of surface ships. As a result, the company was awarded a contract with the US Department of Defense Advanced Research Projects Agency (DARPA) for the implementation of concepts and stealth materials for surface ships, as well as for testing the effects of sea water on materials used to achieve stealth. Thus began the creation of Sea Shadow, which took place in an atmosphere of the deepest secrecy.

The promising ship was distinguished by the unique Small Waterplane Area Twin Hull (SWATH), which gave it the shape of a catamaran. The prototype was assembled at an underwater shipyard in Redwood City, California. The length of the vessel was 50 meters, width - 21 meters, weight - 572 tons. The ship could reach a speed of 28 knots (52 km / h).

The ship required a crew of only four people - the commander, navigator, helmsman and engineer. The first tests of the ship took place in 1981. Peter Suciu characterizes them as disappointing: the ship's wake was huge and could be detected using sonar. The cause of this problem was the installation of the motor propellers, after which they were remade.

In 1984, the company completed the construction of an experimental prototype. In 1985 and 1986. Sea Shadow has been tested. But he never made it past this stage. Although, as Suciu writes, the US Navy still used many of the developments that were subsequently used in the construction of Zumwalt class ships.

In 1993, the US Department of Defense introduced an experimental stealth ship to the public. Soon the ship was used in the filming of the James Bond film Tomorrow Never Dies (1997). In 1999, the ship was re-commissioned for several years, based in San Diego.

In 2006, the US Navy put up the experimental ship Sea Shadow for sale, but no one showed the due interest in it. This was due to the fact that the buyer would not be able to use the vessel for its intended purpose and the only thing he could do with the vessel was scrapping.

It is not very clear why the American military did not offer such an interesting example of shipbuilding to a museum or other organization engaged in the study of stories naval forces. Ultimately, in 2012, Sea Shadow was sold for scrap, subsequently cut. Now it has become known that the last fragments of his structure were remelted like ordinary metal. This is how the US attempt to create a "stealth ship" ended ingloriously. His fate was unenviable.

Now the US has implemented the Zumwalt project, which is classified as a stealth destroyer. However, this project has its own nuances. It is still not clear what weapons the US Navy is going to use on these ultra-expensive destroyers and in what capacity these ships will be used.

Ctrl Enter
Noticed oshЫbku Highlight text and press. Ctrl + Enter
We are
The "Bussines Insider" published a rating of military power of the world. There are surprisesUnique stealth ship put up for auction
Military Reviewin Yandex News
Military Reviewin Google News
34 comments
Information
Dear reader, to leave comments on the publication, you must sign in.