How to bury a billion rubles: DPR wants to restructure coal mining 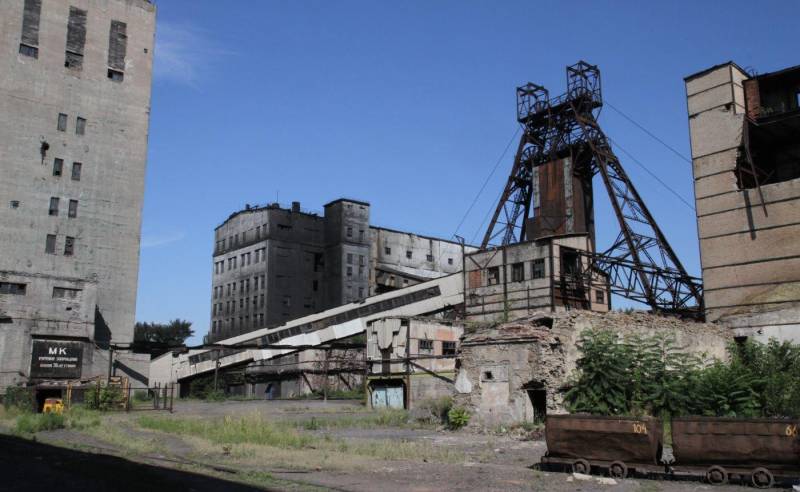 In the DPR, 1 billion rubles were allocated from the budget for "measures to restructure the coal industry of the DPR for 2021–2022." What exactly is hidden behind this streamlined word is unclear - the text of the resolution has not been published. Probably, the restructuring, which was talked about last summer, means the supposed stop of production at all unprofitable mines, partial repayment of debts, etc.

The goals declared by official sources (stabilization of the coal industry, cost optimization, modernization and technical re-equipment of the mine fund) will require not a billion, but tens of billions of rubles. The government admitted that
“More than 70% of all state mines have been operating without reconstruction for over 30 years. The stable operation of the coal industry is limited by the technical condition of the main and auxiliary mining equipment, the renewal of which requires large amounts of investment. "
“Big” is a very mild word. Rather, gigantic, if not impossible.

Unfortunately, after 23 years of Ukrainian rule, three years of work in Ukraine under the formal subordination of the LPNR, and another three years under the strict guidance of Vneshtorgservis, the industry has suffered critical damage from which it is unlikely to recover. In any case, to begin with, it would be nice to resolve the issue with VTS.

Investments in the extractive industry are important and necessary. The question is that for a start it would be nice to resolve the issue with the accursed Vneshtorgservis CJSC, which, having lost control over the mines, still continues to control a number of metallurgical enterprises in the republic. Until now, the question of paying off the wage arrears to the miners, accumulated by the management of "VTS", remains open. It is doubtful that the republics, in general, are able to collect these funds from Vneshtorgservis. But someone can?

Moreover, before investing in the industry, it would be nice to conduct a thorough audit with the involvement of independent Russian experts in order to assess the consequences of external management and give a real assessment of the structure's activities. Including legal. Otherwise, it will turn out that Donetsk to some extent covers from the budget the consequences of someone else's mismanagement. Until the Gordian BTC knot is severed, investment in externally managed businesses looks premature. However, what exactly they plan to spend this billion on, the government is in no hurry to disclose, so conclusions can only be made hypothetical.

Sadly, "restructuring", which means stopping unprofitable enterprises and cutting all possible costs, is inevitable. There are many reasons for this - the mining of "light" coal with a shallow depth of occurrence ceased back in the 70s-80s of the last century. Today, a ton of coal cost about $ 100-140. Profitable mining can be only provided that the mining industry closely interacts with the energy and metallurgy, which, in turn, will cover the needs of the local engineering industry, profitably exporting products and meeting the needs of local miners and metallurgists. Unfortunately, it is impossible to establish such a chain in the LPNR until the situation at metallurgical enterprises changes.

This is the secret of the profitability of Akhmetov's mines - he just controls the power industry, mines, metallurgical enterprises and the port. In addition, he receives huge subsidies from the budget and enjoys unprecedented benefits. Thanks to the same subsidies, the rest of the mines survived, which received profits by buying up coal from kopanks (enterprises for illegal coal mining by open-pit or underground methods), instead of extracting it, they mixed the rock, etc. But subsidies are a thing of the past.

Purely theoretically, if we carry out a strict inventory and audit, cut costs as much as possible and invest tens of billions of rubles in the industry, it would be possible to achieve the well-organized operation of the entire industrial complex and trade not in coal and metal, but in products and mechanisms. But first, you need to put things in order in the LPR. And not only to disperse those who rob businesses, but also to get them to compensate for losses.

Otherwise, you can just as well bury this billion rubles in the ground or throw it into a pit - the effect will be almost equal.