Baltic before the crusaders 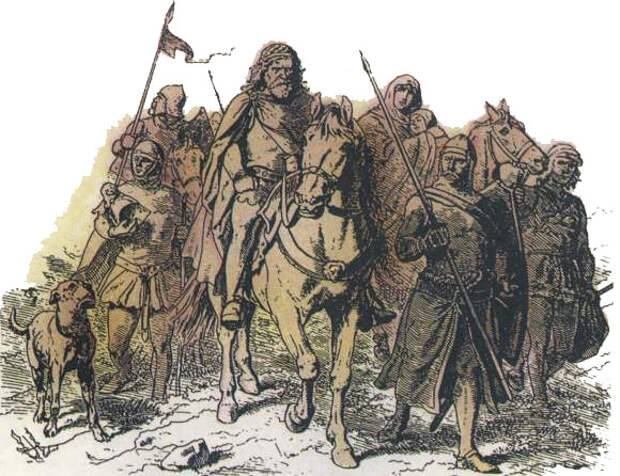 By the beginning of the Iron Age, social stratification had developed in the Baltics, as evidenced by clear differences in funeral customs. The supreme lived on the dominant farm within the settlement or in mountain fortresses. They were buried in stone graves with various important artifacts. Simple peasants were buried with only modest funeral property. The remains of the poorest people, those who were probably dependent on larger farms, were placed in earthen graves or simply laid on the ground in designated areas.

There were notable differences in burial customs in the region, which allow archaeologists to delineate the areas of settlement of various Baltic tribes. For example, in the late Iron Age (800–1200), the Lettigallians buried men with their heads to the east and women with their heads to the west. Men were usually buried with an ax and two spears. A custom practiced only by Lithuanians was the ritual burial of horses after the death of their owner.

Written sources about the peoples of the eastern Baltic states until the second millennium are scarce. The Roman historian Tacitus in his book "Germany", written in 98 AD. e., was the first to describe the Baltic tribes, most likely the Prussians, whom he called the Aestii. He describes them as worshiping the Mother of the Gods and collecting amber from the sea. In Roman times, amber was the commodity most highly prized by traders. The Vistula River provided a trade route through which amber reached the outposts of the Roman Empire.

At that time, the Baltic tribes inhabited a much larger territory than they do now: from the Vistula to the Dnieper in central Russia. After the collapse of the Roman Empire, the great migration of peoples in the fifth and sixth centuries, especially the Slavs, drove the Balts into a more compact area, and also further north, into the territory inhabited by Finnish-speaking peoples, especially the Livs.

The Lithuanians consisted of two large groups: the Zemayts or Samayts ("lowlands"), who lived around the mouth of the Neman River, which flows into the Baltic Sea, and the Aukstaits ("Highlanders"), who lived further up the river to the east. Both of these groups themselves consisted of several tribal territories. Other Baltic tribes closely related to the Lithuanians living to the west and southwest of them were the Skalvians, Yalta and Prussians, who inhabited the territory of modern northeastern Poland and the Kaliningrad region of the Russian Federation.

The largest Baltic tribe inhabiting the territory of modern Latvia, and from which the name Latvians later came, were the Latigalls. They were the last tribe to arrive, driven out of present-day Belarus by Slavic migration to the eastern part of Latvia north of the Daugava River. Other proto-Latvian tribes were Selonians south of the Daugava River.

The Semigalese lands were also located south of the Daugava, but directly west of the Selonian lands. The Curonian lands were located along the western coast of modern Latvia and Lithuania. The coast of the Gulf of Riga was inhabited by the Livs, close linguistic relatives of the Estonians.

Although the Proto-Estonians were not divided into ethnically distinct tribes, there were marked cultural differences between those Estonians who inhabited the south and north of the country, as well as those who lived in the western coastal regions and islands, and who were most directly influenced by Scandinavian influences. Another Finnish tribe lived in the north-eastern part of Estonia - the Votians (Votians), whose habitat extended to the territory of modern St. Petersburg.

Throughout the Iron Age, agriculture evolved, evolving from a slash-and-burn system to a two-field rotary system and, ultimately, to a more efficient three-field system. Towards the end of the first millennium, a system of striped fields emerged, which facilitated the formation of villages. The villages came together to form political communities ruled by elders. These areas, as a rule, were concentrated on the fortified settlement.

Later, with Christianization, these areas of fortified settlements usually formed the basis of the parishes, which became the main administrative units until the twentieth century. Larger territorial units were formed at the beginning of the second millennium, when several of these areas merged together to form the land or chiefdoms. For example, the territory inhabited by the Livs consisted of four lands. The territory inhabited by the semi-Gallians consisted of seven separate lands. These were sovereign units that themselves determined their relations with neighboring lands.

The development of fortified settlements and open settlements demonstrates the evolution of social and political structures. That is, the ambitions of the elite in the Baltic region. Former settlements were built in Lithuania at the beginning of the Roman Iron Age, in Latvia at the end of the Roman Iron Age, and finally in Estonia in the sixth century. Differences in the level of social and political development during the late Iron Age are illustrated by the number of city fortifications: there were about 700 city fortifications in Lithuania, almost 200 in Latvia and less than 100 in Estonia. These figures also indicate that the society in the Lithuanian regions was more hierarchical and paid more attention to military virtues. While in the north, especially in the Estonian areas, the communities remained more egalitarian.

By the twelfth century, some settlements, such as Ersika (Gerzika) on the Daugava, had turned into places of permanent residence, where the military leaders and their attendants lived. Kernavė in Lithuania was the largest and most important castle mound. And it was believed that in the thirteenth century, 3000 people lived in it. The population density in the Baltics at the end of the Iron Age was estimated at about three people per square kilometer.

Compared to Central Europe, the Baltic society was noticeably less stratified and egalitarian. In addition to slaves, mostly women and children, obtained from raids on neighboring lands, most of the people were free peasants. A distinction can be made between the social structure that developed towards the end of the Iron Age in the coastal and western regions, and the social structure in southeastern Estonia, eastern Latvia, and central and eastern Lithuania. In the first, social stratification began earlier, with the emergence of a numerically significant layer of bosses (albeit with a small number of possessions and weak powers). While in the latter regions, the stratification began later and was more intense: the number of chiefs remained small, but the size of their territory and the scope of their powers were much larger. In the first regions, Scandinavian influences were pronounced, in the second, East Slavic ones.

It is impossible to say anything with certainty about the pre-Christian religion. Stone Age religious practices were typical of ancestor and fertility cults. The natives' belief system can be characterized as animistic: the belief that everything in the natural world has a spirit. By the early Iron Age, humans had also begun to worship personified and anthropomorphic celestial gods. Later written sources mention the most notable deities Perkunas (Baltic) and Taara (Estonian), both gods of thunder, akin to the Scandinavian Thor.

Before the arrival of the crusaders

Although the Baltic история before the arrival of the crusaders at the end of the 1009th century, it is considered prehistory due to the lack of written sources; in the Scandinavian sagas and Russian chronicles there are numerous references to the Baltic and Finnish tribes. Lithuania is first mentioned in a German chronicle written in 800, which refers to the martyrdom of a Christian missionary named Bruno. During the Viking Age (1050-XNUMX), Scandinavian warriors regularly raided the eastern shores of the Baltic Sea.

Archbishop Rimbert of Bremen in the Life of Saint Ansgar tells about the crushing defeat of the Danish naval expedition against the Curonians and the subsequent victorious Swedish campaign against the Curonians in the 850s. The intensity of interaction throughout the Baltic Sea is evidenced by the runic monuments of the XNUMXth century preserved in Sweden, in which soldiers who died in the battle on the eastern coast of the Baltic Sea are recorded. With the exception of the Swedish colony on the southwestern coast of Latvia in Grobipa in the XNUMXth century, local resistance prevented the Scandinavians from gaining a foothold in the Baltic lands.

In any case, the Vikings were more tempted by the wealth that could be obtained further to the east and south. The two main trade routes to the east, which were used by the Vikings, crossed the Baltic lands. The first is across the Gulf of Finland along the Estonian coast, up the Neva to Lake Ladoga and down to Novgorod. Or east to the Volga to reach the Caspian Sea. The second - along the Daugava to the Dnieper, south to Kiev and across the Black Sea to Constantinople. A smaller route took the Neman River through Lithuanian territory to reach the Dnieper downstream.

The indirect contacts with the Middle East established through these trade routes to Byzantium are evidenced by the treasures of Arab silver coins (dirhams) of the XNUMXth century, which were discovered in the Baltic region. One colorful saga about interaction in the Baltic Sea region is the story of the Norwegian king Olaf Tryggvason, who was captured as a child by Estonian pirates on his way to Novgorod and sold into slavery. The Viking princely dynasties played an important role in the formation of the earliest Russian state - Kievan Rus in the XNUMXth century.

Russian principalities actively expanded west and north in the tenth and eleventh centuries. Russian chronicles report that in 1030 the Estonian settlement of Tartu was captured by the Grand Duke of Kievan Rus Yaroslav the Wise, who also opposed the Lithuanians ten years later (in 1040). In the XNUMXth century, the Russians penetrated further west, into Black Russia, establishing a fortress in Novogorodok (Novogrudok). However, the initiative passed to the Lithuanians by the end of the century, when the state of Kievan Rus was fragmented.

The Proto-Latvian tribes were most closely associated with the Russians. Lettigallians paid tribute to the neighboring Russian principalities of Pskov and Polotsk. And the Lettigale land in the middle reaches of the Daugava was ruled by a Polotsk vassal. Some Latigal leaders converted to Orthodoxy. Selonians and Livs who lived on the banks of the Daugava also paid tribute to Polotsk from time to time.

In 1187, Estonians from Saaremaa even sacked the main city of Sweden, Sigtuna, prompting the Swedes to later build a new capital in Stockholm. Christian Swedish and Danish kings undertook punitive expeditions against the Curonians and Estonians. But until the XNUMXth century, these raids were mainly aimed at neutralizing the threat of East Baltic piracy, rather than conquering territories or converting the natives to Christianity.