Nobody wants or can fight 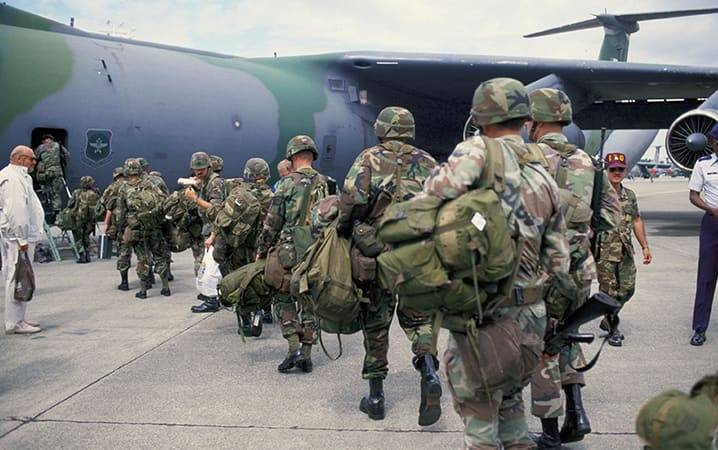 I once had a serious friend - an American Pit Bull. A powerful and beautiful dog, capable of protecting from any enemy and at the same time a terrible slime. We even joked that Paige (that was his name) does not bite enemies, but licks them to death. But he had a terrible enemy, the very sound of which caused horror in the eyes of a dog. A vacuum cleaner! As soon as the cleaning began, the dog ran away to his sofa, and no one could throw him out of there.

Who will go against the vacuum cleaner

I didn't tell in vain history from his life about the long-gone hero Paige. We have written so many times about the power of NATO that it is high time to ask what is NATO in general? Who is this "vacuum cleaner" with whom we need to fight?

Today our position is no different from that of my late dog. There is a terrible enemy, and there is you. A simple dog, accustomed to sleeping on a soft one and eating straight from the tin.

And they all won! They just took and did what was impossible to do. Impossible for everyone except the Russians. Not with the help of magic or some otherworldly forces. Even without the help of any Europeans and other warriors there. They just stood in front of the Russian army ... Russians among Russians. More precisely - the first among the Russians ...

Today we talk a lot about how strong the enemy is. We count guns, airplanes, ships and other nonsense, of which there is enough in any army. We consider dollars, euros, rubles, pesos and all other currencies as a measure of the state's ability to defend itself. We count the number of muzzles of a person who are wearing military uniform today.

What for? It is necessary to consider real soldiers and officers capable of attacking or defending themselves.

It is strange to me that with a huge amount of materials about NATO's actions in recent years, almost no one remembers history. The very science of the past, which in fact is the science of the future. The well-known thesis about the development of human society in a spiral is remembered by many. Events are repeated in new conditions. As in classical literature. Plots invented thousands of years ago are simply described in a modern way. Modern “meat” grows to the well-known “bones”.

Not only Russia was falling apart

After almost every article on the topic of international relations, there are several readers who will appeal to spit on foreign policy and do domestic affairs. Let's instead tank or we'll give the money to the old people, build a road from one village to another, help orphans, and so on. And then there will be those who will remember about feeding their own and someone else's army, about the fact that they need to be confident in their own safety.

Yes, we have a lot of problems. No more and no less than in any large state. The myth that there are countries where all problems have been resolved has been debunked by the coronavirus pandemic. What was carefully hidden before has now become the property of the general public, thanks to the Internet and other modern technologies. After a video from the USA or Western Europe, I somehow do not really believe in the prosperity and freedom there. Just a different life, a different understanding of the same freedom.

Those who follow the events in the world have probably paid attention to the attention with which Western politicians followed the events in Moscow. They not only examined our military equipment at the parade, but also listened attentively to the words of President Putin and Defense Minister Shoigu. They listened in the hope that Russia would nevertheless agree to descend from the level of the victors of Nazism to the level of the vanquished.

They expect Russia to admit that not only virtually all of Europe (with the exception of a couple of countries like Yugoslavia) slavishly knelt down before Hitler, but the Russians too. After all, this is precisely what some are talking about today, even here, in Russia and in other former republics of the USSR, and now - independent countries. All this talk about the cancellation of the holiday and the transition to a European day of some kind of reconciliation is from there, from these treacherous thoughts. Sometimes those who talk about this do not even understand the essence of their betrayal.

War consists not only of victories and defeats, but also of everyday life

When in the 90s of the last century Russia was writhing from perestroika, when we cut in pain everything that we considered unnecessary, or what our "good friends" from Washington, Berlin or Paris pointed out to us, there were also talks in the US and the EU about unnecessary high defense costs. The enemy is defeated. He is bent over from hunger. He destroys his equipment and weapons. Why do we need a large army? A few combat units are enough to calm down some Papuans or Asians. Or what is left of the Soviet Army.

We talk a lot about NATO's eastward expansion, about strengthening the alliance's positions in our neighboring states. But for some reason we do not consider at all those countries that are far from us, but until recently they were, albeit not equivalent to our groups of forces, but still a military force, which, together with other NATO armies, gave us some concern.

Yes, the armies of Germany and France are still serious opponents, even though their armament is already lagging behind the Russian one. Even in spite of the fact that the military equipment is in a deplorable state due to many years of confidence in the weakness of the Russian Federation. But there are other armies, aren't there? Smaller, but armies.

What happened to them over the years?

There is the army of Italy, Spain, Portugal and others. Even the armies of the Benelux countries are! What is there? Will the alliance, with the help of these armies, somehow change the situation in the event of a conflict and transfer fresh, trained and combat-ready units to the Eastern Front?

The beautifully advertised deployment of the US Army will take a very long time and threaten with huge losses of manpower in transit. This is the very time and should, according to the idea, win the European armies of small states.

What the Benelux countries threaten us with today

Let me quote my colleague, independent military expert Alexander Khramchikhin, who analyzed the state of the Benelux armies in depth in an article published at the end of April this year.

“From microscopic Luxembourg, however, even at least something to demand was pointless, but Holland has created a very serious military machine. The Belgian army was inferior to the Dutch, but it was not zero either.
“Since the end of the 60s, both armies simultaneously switched to the German Leopard-1 (480 for Holland, 346 for Belgium). In the mid-80s, 465 Leopard-2s (including 20 training ones) were produced specially for the Dutch army in Germany. The Belgian tankers did not “mature enough” to this vehicle (they used the old Leopard-1 - the author) ”.
You can continue to list the weapons of these armies. Even in Luxembourg (!) There were five American V-80 Commando armored personnel carriers in the early 150s. In fact, for all positions in the Belgian and Dutch armies, weapons and military equipment were quite modern at that time. Warships under the flags of these countries sailed on the seas. The skies were guarded by the air defenses of these countries. They were armies.

Then exactly what happened, for example, in Ukraine during the early "independence". Those who were the enemy and stood at the borders became friends. This means that the army is not needed. Some kind of army is needed, which will walk at parades with a promenade and talk about its own strength to calm its own people. All other issues will be decided by the Americans. Armament has become a commodity.

“Neither Holland nor Belgium have purchased a single tank since the beginning of the 90s. Moreover, it is they who become the first countries to abandon tanks altogether. The Dutch "Leopards" are being sold in all azimuths; Brazil has become the only buyer of the Belgian "Leopards-1" (in the amount of 87 cars). A significant part of the Leopard-1 was scrapped. The last Dutch Leopards 2 went to Germany and Finland.

Most of the AIFVs of all modifications have been sold (the main buyers are Bahrain, Egypt, Morocco, Jordan, Chile), almost all M113s are also sold out or scrapped. "
Again, the list of what has been sold or scrapped can be continued for a long time. Simply put, then:

“In general, the Armed Forces of the Benelux countries are symbolic values ​​and are incapable of independent conduct of hostilities. It is quite natural that of the three remaining combat brigades of the Dutch army, two are integrated into the divisions of the Bundeswehr. In this regard, it makes no sense to discuss the prospects for rearmament of these armies. "

Briefly about the prospects

But the Americans do not want to fight either. They also operate traditionally. Let others fight, and we will come before victory and help the winner. And then we'll get our kush from the confiscated one. You can win, or you can buy victory. And then buy the main laurels of the winners. History is just what is written about in textbooks.

This is where the inadequate Zelensky appears with the ability to carry nonsense, like the speech on May 9, in which the people believe. Not all the people, of course, but just that, active, part that participates in the processions and rallies of the fascists. It is the part that will go to fight and pull others, dissenting, but silent, as it happens now in Donbass.

Ukraine today is just a pimple on the ass, which prevents Russians from sitting quietly. Naturally, Russia is trying to cure this pimple, while therapeutically. And her opponents cherish this pimple and support in every possible way. Simply put, it seems to me that it is time to go from a therapist to a surgeon. These doctors' treatment, however, is more painful, but also more effective. It hurts once, but then it feels good.

And what about Europe and the United States?

I will quote Josep Borrell, who just yesterday said bluntly that the EU was not ready for confrontation. The EU understands that Russia today is not a nut that Europe is able to bite through without breaking its own teeth:

"We reaffirmed our strong support for the Czech Republic and Bulgaria, but all countries agree that there is no need to continue escalating tensions with Russia."
“It is important that the EU does not deviate from its current course towards Russia and continues to protect human rights, and does this very consistently,”
- German Foreign Minister Heiko Maas, also yesterday.

Everyone understands everything. Diplomatic work begins to search for options for restoring EU-Russia relations. The Europeans do not want to admit their defeat, which means they need a path with minimal image losses, which can later be passed off as victories.

In my opinion, the USA is in exactly the same position today. The policy of "Black Friday", when prices for goods are raised before the sale, and then, during the sale, they are sharply reduced, thereby causing the excitement of buyers, did not work.

Ctrl Enter
Noticed oshЫbku Highlight text and press. Ctrl + Enter
We are
About Stalin and KhrushchevWhat you didn't want to know about England
Military Reviewin Yandex News
Military Reviewin Google News
125 comments
Information
Dear reader, to leave comments on the publication, you must sign in.