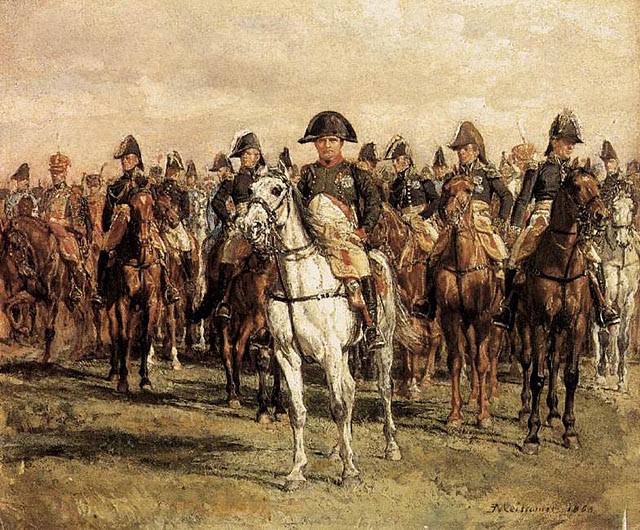 Napoleon with the headquarters. Painting by Jean-Louis-Ernest Meissonier (Wikimedia Commons)

Regardless of Napoleon's Headquarters, the Great Army had headquarters of different levels. In wartime, several corps formed into an army that could sometimes act independently on the periphery of Europe: in Spain or Italy. To do this, they needed to form headquarters, independent of the Headquarters. Even the German Army of Marshal Louis-Nicolas Davout, separated from the Grand Army in 1810-1812, acquired its own headquarters.

- adjutant commandants, as a rule, four;
- Adjutants in the rank of captains, there are twice as many adjutant commandants in the state;
- supernumerary officers in the rank corresponding to the commanders of battalions or squadrons who have not been assigned to line subunits;
- supernumerary officers in the rank of lieutenants;
- temporarily seconded officers, as a reserve of understudies of the dead staff officers;
- engineers-geographers, as a rule, five; their task was to keep the headquarters maps in order and constantly display the combat situation on them.

In addition, at the headquarters there were:

- General, commander of artillery, with his staff of artillery officers; they were obliged to constantly be with the commander of the army so that he could transmit his orders to them without delay;
- general or colonel sapper with his headquarters of military engineers; they were also ordered to be with the commander, but not as strictly as the artillerymen;
- numerous supernumerary officers of all ranks; could fill the places of retired line commanders; they were also entrusted with the administration of the occupied provinces and cities;
- quartermaster of the army headquarters, most often with the rank of colonel; his duties included maintaining internal order;
- a detachment of gendarmes under the command of a profos; the gendarmes carried out guard duty at the headquarters of the army and escort service at the headquarters officers.

At the beginning of the empire, there were companies of staff guides who played the role of escort and liaison for units on the march. When these companies were abolished, the escort service at the headquarters of the armies was carried alternately by cavalry regiments, which were allocated for this by consolidated companies. Sometimes these clans were united in consolidated squadrons.

There were also guides from local residents at the headquarters. Usually the French tried to recruit four horse and eight foot guides, but in the end everything depended on the degree of friendliness or hostility of the civilian population and the ability of the flying squadrons to "get language". The guides, of course, were not on the staff list; they were not trusted and always remained under the supervision of an intelligence officer and gendarmes. 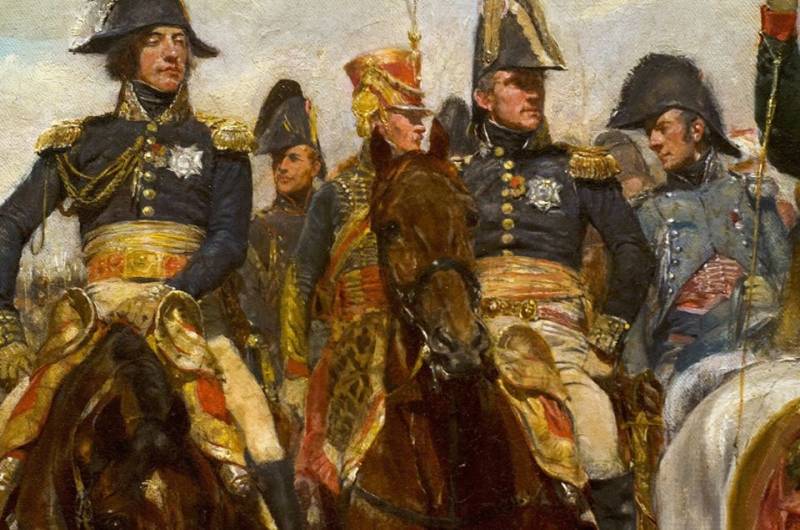 Marshal Oudinot's headquarters at the Battle of Friedland (Painting by Jean-Louis-Ernest Meissonier)
Corps commanders, in the rank of marshals or divisional generals, had the right to keep six adjutants with them, including one adjutant-commandant, one officer equal to the battalion or squadron commander, one captain and two lieutenants. The corps consisted of several divisions (usually from 3 to 5), each of which had its own headquarters under the command of the adjutant commandant (sometimes he could have a deputy). The division headquarters consisted of two or three officers. The entire headquarters (together with the artillery and sapper officers attached to it) followed the commander incessantly. On the battlefield at the headquarters of the division, there was usually a liaison officer from the headquarters of the corps. His presence was mandatory if the division was operating in isolation from the main forces.

In addition, at the headquarters of the division there were:

- duty officer (since 1809); it was his responsibility to transmit the orders of the division commander to the brigade commanders;
- one or two geographic officers;
- divisional artillery commander or his deputy;
- two sapper officers;
- supernumerary officers; in the event of the death of a brigade commander or regiment commanders, they could quickly replace them;
- three adjutants, one with the rank of major, the rest - captains or lieutenants;
- quartermaster with the rank of major or captain; he kept order at the rate;
- from 8 to 10 gendarmes under the command of a non-commissioned officer;
- a platoon of infantrymen as an escort; an escort was not provided for in the staffing table, but division commanders were allowed to have one at their discretion;
- two orderlies on foot and six horsemen;
- two horse and three foot guides from the local population in the custody of two gendarmes;
- three medical officers attached to the division.

Each division was divided into brigades, which could be from 2 to 5. The brigades also had their own headquarters, but purely formally limited to the required minimum. There were no chiefs of staff in the brigades; there were two or three adjutants and orderlies, seconded one from each regiment. 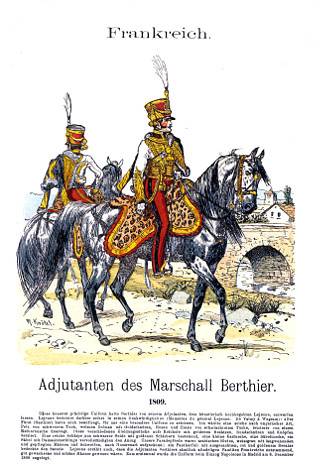 The most demanded staff officers were adjutants, which means those with whom commanders of all levels crossed paths. Each general had adjutants at his disposal. And, although their number was limited by the staffing table, in fact, the generals, at their discretion, could bring their number to a dozen or more. Often the tasks of adjutants were performed by supernumerary officers, in the absence of other activities. As a rule, the adjutants were officers with the rank of captains or lieutenants. In theory, it was forbidden to make warrant officers and cornet adjutants, but in practice, it was among them that generals selected adjutants for themselves in order to soon raise them in rank. In fact, it was a way of speedy promotion of the offspring of noble or wealthy families who interceded for them before the generals.

The more than it should be, the number of adjutants is explained by the fact that they were divided into two categories. There were permanent adjutants who served with generals for a long time, sometimes in several campaigns, and temporary adjutants assigned to generals for a period of time - usually for one campaign, but often for only a few days or weeks, or until certain assignments were completed.

Adjutants wore lush, multi-colored uniforms, decorated, except for aiguillettes, which had a practical purpose, with all sorts of non-statutory excesses. Thus, through the splendor of the uniform of their adjutants, the marshals and generals sought to emphasize their own splendor and significance across the entire army. Often the marshals themselves were engaged in the design of the uniforms of their adjutants or agreed to their whims, knowing full well that by doing so they were violating the charter.

The chief of staff of the Grand Army, Marshal Louis Alexander Berthier, partially jealous of his own magnificence and position in the army, tried to limit such pomp and imitation of his own adjutants, tried to curb the fashionable inclinations of his subordinates. Once, when Marshal Neia's adjutant rode up to him on the battlefield in red trousers reserved exclusively for Headquarters adjutants, Berthier ordered him to take off these trousers immediately. By order of March 30, 1807, signed in Osterode, Berthier secured exclusively for the adjutants of the marshals the right to wear hussar uniforms. 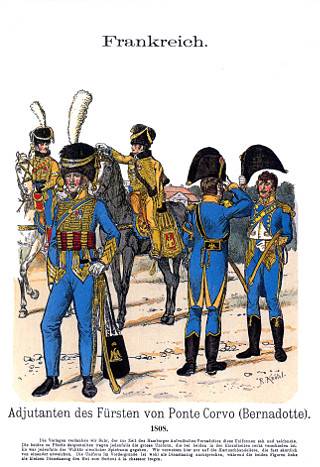 Adjutants of Prince Pontecorvo (Bernadotte) (Knötel Uniformenkunde)
In theory, adjutants were supposed to wear uniforms according to the charter of 1 Vendemier XII of the Republic (September 24, 1803). In practice, the design of their uniforms was limited solely by the imagination of their owners and from the statutory elements. Only aiguillettes and armbands have survived, indicating whose adjutant this or that officer was. The blue band stood for the adjutant of the brigadier general, the red one for the divisional general, and the tricolor one for the adjutant of the corps or army commander. At this point, there could be no deviations from the charter.

The adjutants used the best horses, which they bought and kept at their own expense. Such horses had to be fast and enduring. Not only the lives of the adjutants, but also the fate of battles, often depended on the speed of the horses. Endurance was important because the adjutants could ride long distances all day long, transmitting orders and reports.

In the diaries and memoirs of contemporaries, you can find notes about the kind of records set by the adjutants, which quickly became known at the headquarters, so that other adjutants tried to break the records of their rivals. Marcellin Marbeau rode 48 kilometers between Paris and Strasbourg in 500 hours. In three days he rode from Madrid to Bayonne (that is, a little more - only 530 kilometers), but over the mountains and in areas teeming with Spanish partisans. Colonel Charles Nicolas Favier, sent by Marshal Marmont with a report on the Battle of Salamanca on July 22, 1812, arrived at Napoleon's Headquarters on September 6 just before the Battle of Borodino itself (this is reflected in the story "War and Peace"), crossing all of Europe: from Spain, through France, Germany, Poland and deep into Russia.

Adjutants, as a rule, moved independently, unaccompanied. Even one orderly could delay the delivery of an important message. But on the battlefield, marshals and generals usually gave the adjutants an escort, sometimes even an entire squadron. Otherwise, the report could not reach the infantry square or artillery battery, around which the masses of the Cossacks circled.

Ctrl Enter
Noticed oshЫbku Highlight text and press. Ctrl + Enter
We are
Diplomats of the People's Commissariat of Defense: on the eve and during the warIron Marshal by Louis Nicola Davou
Military Reviewin Yandex News
Military Reviewin Google News
154 comments
Information
Dear reader, to leave comments on the publication, you must sign in.