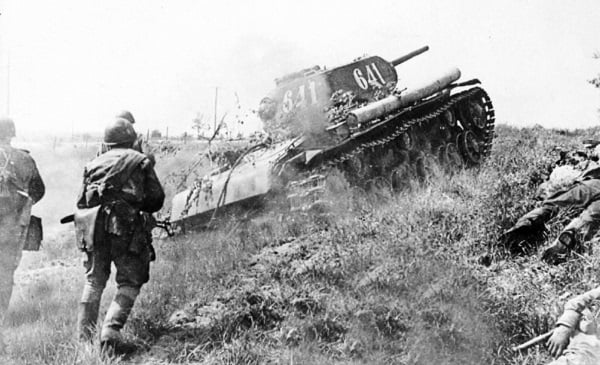 In July 1943, Nazi Germany was planning a summer offensive campaign. Although the defeat at Stalingrad destroyed hopes for the defeat of the USSR, Hitler's plan was different: to conclude a truce with Moscow while preserving the occupied lands. This required a major victory, and the Fuhrer hoped to get it near Kursk.

Under the strictest secrecy, the German Citadel plan was born. Two tank the groups were to strike a large-scale blow in the Kursk Bulge area. The Wehrmacht command planned to cut the Voronezh and Central Front of the Red Army, unite in the east of Kursk and take the main forces of the two fronts into the ring. Their destruction would be a disaster for the Soviet Union, and Stalin would have had no choice but to conclude peace on any terms.

On the southern face of the Kursk Bulge, under the command of General Manstein, the 4th Panzer Army and the 2nd SS Panzer Corps were concentrated. At the disposal of the group were the most powerful armored forces in the world - elite formations with the "Tigers" and "Panthers". Their task was to defeat the Soviet troops in the direction of the city of Oboyan and exit to Kursk. On the northern face, General Otto Model led the offensive. And he also had every opportunity to break through the front.

The Soviet plan provided for the tactics of exhausting the enemy in defense and going over to a counteroffensive, but the commander of the 1st Tank Army, Mikhail Katukov, was embarrassed by the number of forces near Oboyan. In those days, defending the line of defense was critical. Otherwise, all previous efforts would have been ruined.

Operation Citadel began at dawn on 5 July. The first attack from Belgorod was taken over by the infantry and artillery of the 6th Guards. army. The Tigers fired with deadly precision and advanced ahead. On the flanks were medium tanks and assault guns. However, a few hours later, reports of fierce resistance, well-aimed artillery fire and difficulties in overcoming obstacles poured into the headquarters of Army Group South. At that moment, Operation Citadel ceased to seem impeccable to the Germans: the losses were greater than expected, and besides, the timing of the capture of key positions was postponed.

Near the village of Cherkasskoye, the tanks of the 48th Panzerwaffe corps were supposed to immediately break through the defenses, but at some point, mines began to explode under their tracks. Having lost several tanks, the Germans sent 2 infantry regiments into battle, which were opposed by an infantry division led by Vladimir Bazhenov. At the cost of their own lives, the guardsmen put up desperate resistance and repelled attack after attack. Bazhenov's regiment was killed, but the enemy's tank corps advanced only 6 kilometers in a day.

Meanwhile, having struck the first blows, the Germans revealed their plans. The commander of the Voronezh Front, General of the Army Nikolai Vatutin, made a risky decision - to throw all the front reserves into battle and, without waiting for the end of the defensive phase, launch an offensive with a single fist, including the tank army of Mikhail Katukov. However, the German troops managed to "crush" the left flank of the 6th Guards. army, create gaps in the defense and continue to move northeast, bypassing Katukov's army. Plan "Citadel" on the southern face of the Kursk Bulge was approaching its final stage.

To slow down the pace of the offensive, Mikhail Katukov, without waiting for the approach of the main forces and violating all the commandments of tank battle, gave the order to attack German vehicles in the village of Yakovlevo. About forty "thirty-fours" broke into the village without reconnaissance, artillery preparation and infantry cover. They could not destroy the enemy, but by maneuvering between the destroyed houses, they gained time. Other formations of Katukov's army and units of the 2nd Guards were pulled up to Yakovlevo. tank corps of Colonel Alexei Burdeyny. The battle lasted for several hours. All this time, dozens of tanks were turning into burning pieces of metal, and only in the evening did the situation in this sector of the front stabilize. Soviet tank formations were sent to other positions as firefighters to help hold the front line. At that moment, when only Vladimir Bochkovsky's company (8 T-34 tanks) remained at Yakovlevo, the Germans launched another attack. "Tigers", "fours" and self-propelled guns attacked without tactical tricks, trying to crush the Soviet barrier with a blow on the forehead. The crews of "thirty-fours" fought to the last and destroyed 16 tanks. The Germans wavered, but by the time the reinforcements arrived, of the 5 experienced Soviet tank commanders, only Vladimir Bochkovsky survived.

Despite the breakthroughs of the Soviet defense to a depth of 25 km, by July 8, the prospects for the success of Operation Citadel looked dubious. General Manstein decided not to go head-on to the 1st Tank Army, but to bypass it to the east, breaking through the interfluve of the Psel and Seversky Donets rivers, Prokhorovka station and further north to Kursk.
Meanwhile, Nikolai Vatutin persuaded the Headquarters to repeat the attempt of a general offensive by the troops of the Voronezh Front. July 12, south-west of the village of Prokhorovka, up to 500 tanks and self-propelled guns of the 5th Guards. Panzer army launched a frontal attack against the Leibstandarte SS Adolf Hitler division. The Germans defended themselves on rough terrain, and the Soviet formations suffered significant losses. Katukov was informed about the critical situation. His 1st Panzer Army, which survived heavy fighting, had to urgently accelerate the offensive and deepen into German territory.

The thinned battalions of the Red Army were reduced to companies and platoons. In one formation there were different types of tanks and infantry. Together they moved in a familiar direction to Yakovlevo. The offensive of tired, long-standing troops surprised the Germans, who themselves had planned the attack. In the Soviet vanguard were well-armored Churchillies, which took the blow and revealed the location of enemy vehicles. In that battle, the commanders of the tank crews showed all their skill and composure. 2 kilometers deep into the positions of Germany were covered.
The next day, Hitler urgently summoned Generals Manstein and Model. The Fuehrer did not believe that the German plan could still end in success, and ordered the curtailment of Operation Citadel. He was sure that even if the Germans achieved success on the southern face of the Kursk Bulge, Stalin would no longer make concessions. In addition, the Allied landing in Sicily demonstrated the determination of the soldiers to fight on the continent. Geopolitically, the war was lost for Germany.

For more details, facts and details of the assault on the main strip of the Soviet defense, see the video from the creators of the famous game World of Tanks.

Ctrl Enter
Noticed oshЫbku Highlight text and press. Ctrl + Enter
We are
"Black October" of 1941 of the year: rout of the Bryansk Front and Vyazemsky "boiler"Battle of Berlin Unknown War
Military Reviewin Yandex News
Military Reviewin Google News
47 comments
Information
Dear reader, to leave comments on the publication, you must sign in.